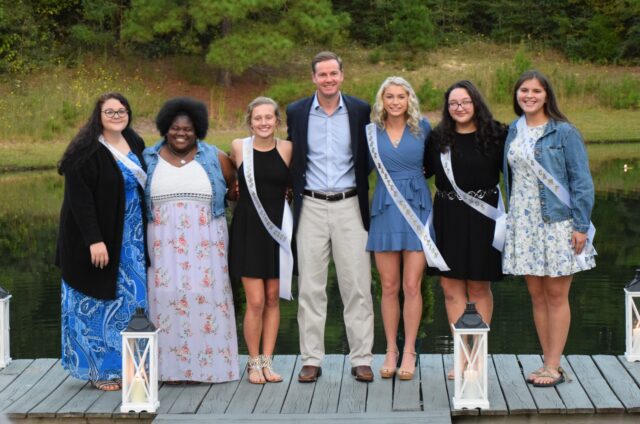 GRAPELAND – The 2020 Peanut Queen contestants were made to feel like royalty on Sunday night, Sept. 27 as they were treated to a sumptuous dinner and presented with several tokens of appreciation/recognition. In addition, State Representative Trent Ashby was on hand to provide an informal conversation on the inner workings of the Texas government.

The guests of honor, of course, were the six lovely young ladies who are aspiring to be the 75th Annual Peanut Queen. In alphabetical order, they are: Cheney Boyd, Macy Cutler, Arionna Davis, Cierra Espinoza, Stacy Perez and Mary Jane Watson.

Once the six young ladies had a chance to mingle and chat with the other guests in attendance, an invocation was provided by Grapeland ISD Superintendent Don Jackson.

The evening’s event was hosted by 2020 pageant coordinator Tammy Hassell-Anderson and her husband Stuart Anderson, who served as emcee for the soiree.

“I am not from Grapeland and I haven’t been here that long. My name is Stuart Anderson and I am Tammy’s handyman,” he chuckled.

Following his opening remarks, Anderson turned the program over to Grapeland Mayor Balis Dailey who extended greetings from the city of Grapeland and said the city would like to recognize the 2020 contestants.

“One of the things about being the queen is that it really and truly shows you are a great leader. You are going to be the queen of many things in your life but we would like to present you with something special that you can hang on your wall and think about every year or so,” he said.

The mayor then presented each contestant with a certificate congratulating them for their efforts during this year’s pageant.

Grapeland Chamber of Commerce President Brandon Bridges was next to speak and commented he personally knew most of the contestants or their families.

“Running for Peanut Queen is an opportunity and it is somewhat of a privilege. It is a lot of hard work and it is something you will not forget. One of you will be crowned as the 75th Peanut Queen and by telling you that, I want to extend my apologies. The 75th Annual Peanut Festival wasn’t supposed to happen this way. We were supposed to have a big shindig. A couple of big parties, a big pageant and lots of fun things going on,” Bridges said.

Unfortunately, the COVID-19 pandemic changed all that.

As he continued, the chamber president also extended his thanks to the young ladies “… for making the effort, making the sacrifices and for working with the chamber of commerce board of directors, as well as the city to understand the situation we are in. We had a lot of really cool things planned and I want your parents and sponsors to understand that. The apology extends to you because you don’t get to have a big, nice parade this year. Maybe next year, you can ride on some of the floats we have, assuming we can finally get past some of this.”

Bridges further said, “You are going to be one of those ladies that gets called back in 25 years when we have the 100th (Annual Peanut Festival) and you can say I was the 75th (Annual Queen) or I was at the 75th. You will always be a part of this festival and a part of this community. I congratulate you for it. I congratulate you for taking the opportunity and making the sacrifices this pageant takes. It’s not easy.”

At the conclusion of his remarks, Bridges introduced Rep. Ashby who thanked the Andersons for the invitation and congratulated the six young ladies on being contestants for the 2020 crown.

“I get to do some pretty cool things as your state representative, but this is right up there at the top of the list,” he said. “The fact that you took the opportunity and initiative to still go through with this – I think it makes it even more special. One of the things you will learn about people who are successful and happy in life is how they deal with adversity. Your senior class and you – as contestants – are dealing with a lot of adversity. It’s been a crazy year but here you are. The 75th Annual Peanut Queen candidates.”

The state representative said he sort of laughed when he heard a reference to the 100th Annual Peanut Festival.

He smiled and said, “It doesn’t matter if you’re a queen or not. All six of you are going to come back and say, ‘Oh, honey! Let me tell you about 2020! You’re not going to believe this!’ This is one of those scenarios where you view the glass as half-full or half-empty. There will be a lot of good that comes out of this.”

He spent the next several minutes providing a breakdown of how many people each state representative and state senator represents before moving on to a presentation of how a bill becomes a law in the state of Texas.

Once Ashby concluded, the contestants were able to ask questions and visit with the state representative, along with friends and family, which brought the evening to a close.