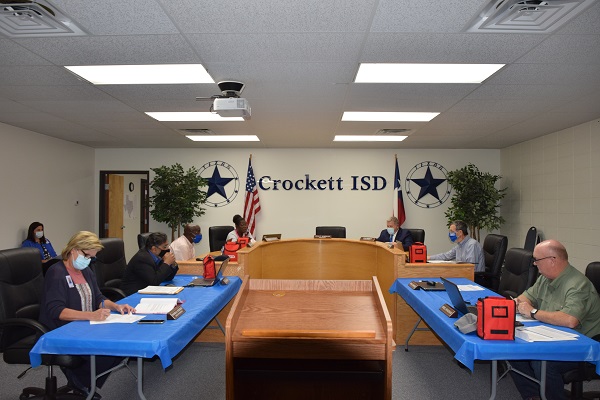 CROCKETT – The Crockett Independent School District (CISD) Board of Trustees met in their regularly scheduled meeting on Monday, Sept. 28. Over the course of the meeting, several items were addressed including targeted improvement plans for the junior high and elementary schools. In addition, the CISD asynchronous learning plan was also discussed.

Following the approval of several routine agenda items, CISD Superintendent John Emerich spoke to the board about the targeted improvement plans.

“We are a little bit of a holding pattern this year with our accountability. It also means we are still under what we were last year. So, it is required – again – for the junior high and the elementary schools to do their targeted improvement plans. Basically, this is a plan that helps them identify what areas they are going to target this year and what some of these action steps are. That has to be turned into the state and periodically throughout the year it must be revisited,” he said.

Board Secretary Dr. John Garner asked if there were any differences in last year’s plan and this year’s plan.

Asst. Superintendent Chanel Veazy replied, “From what I have been able to tell, there are no material differences. The only (overall) difference is we have entered into a pilot (program) so the format looks different. The reason we are part of the pilot at the elementary school is because the elementary school had a lower rating. It was rated as ‘improvement required’ and had to be put on that form. Otherwise, there are no material differences.”

Junior High Principal Johnny Gomez added, “One of the differences at the junior high is we do not, because we were rated a ‘D’, we do not have to submit this to the TEA. We just have to bring it to the board for board approval.”

Prior to the actionable action portion of the meeting, a Crockett ISD parent addressed the board and expressed her concern about the way the district responded to her child’s diabetic condition.

She explained that recently, someone at a school campus had provided her son with chocolate milk and a lollipop. When she went to the school to voice her concern, she felt the matter was not handled appropriately and “… swept under the rug.”

Because the parent spoke during the public forum, board members were not allowed to respond to the issue. However, Board VP Karen Norman assured the parent the matter “… did not fall on deaf ears.”

As the meeting continued, the superintendent brought forward an agenda item concerning amended election items for the Nov. 3 election.

“All this is that the dates have to be changed. As you recall, the original election date was back in May. I did want to point out that the county judge (Jim Lovell) did add a couple of early voting places. You will notice there is one in Grapeland and one in Lovelady. People can go to those polling places and actually vote in our election because we signed a joint agreement (with the county),” Emerich said.

Monday, Oct. 5 is the last day to register to vote. The early voting period runs from Tuesday, Oct. 13 until Friday, Oct. 30.