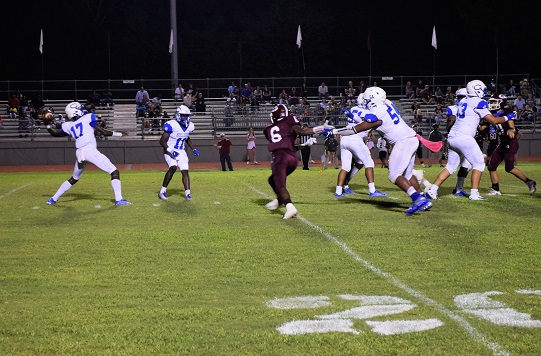 Bulldogs Even Record at 2-2

GARRISON – The Crockett Bulldogs’ defense was on their heels several times last Friday night, but when it mattered most, they rose up and snuffed out a Garrison Bulldog rally to preserve a 28-20 win and get back to .500.

As the game got underway, Crockett won the toss but deferred until the second half. Garrison opened with the ball at their own 12, but a bad snap on first down pushed them back to the three. Maxwell Gipson got six yards back on second down and on third and long, Garrison QB Cermodrick Bland connected with WR Chadrick Henderson for 14 yards. A facemask penalty moved the ball out to the 40 and gave Garrison new life.

After Dmarcus Miller picked up 10 for the home Bulldogs, the visiting Bulldogs’ defense stiffened and forced a punt.

Crockett took over at their own 15. An offsides call against Garrison moved the ball out to the 20 but after two incompletions from Jadyn Collins, Crockett was faced with a third-and-five. A bad snap on the next play was kicked around before Garrison finally recovered at the Crockett 15.

With their backs to the wall, the Bulldogs in blue made a defensive stand that could go a long way in determining their fate the rest of the year. Gipson picked up 13 yards on first down and then Bland was stuffed at the line of scrimmage on the next play. Miller picked up one to set up a third-and-goal from the two. On the third down play, Bland called his own number but Crockett’s Demuntreon Bedford and Christopher Purvis-Torres broke through the line to tackle Bland for a three-yard loss.

As a result, Garrison decided to attempt a field goal. Once again, the Crockett defense broke through the line, blocked the kick and kept the score tied at zero.

Crockett took over at their own 13 and launched a long, time-consuming drive. Tywoin Delane picked up six yards on first down. Keshun Easterling bulled his way for 15 on second down and when Garrison was called for a facemask penalty, Crockett had the ball near midfield.

Easterling added another five and Collins connected with AJ Wallace for 10 to move the ball to the 34-yard line. After Easterling picked up a yard on first down, Collins completed a pass to Ja’Lyne Carruthers for seven more. Delane followed with three straight carries to move the ball to the seven and from there Collins did the rest as he scampered around the right end for a TD. Antonio Cruz knocked home the PAT and with 1:19 left in the first quarter, Crockett led 7-0.

Following the kickoff, Garrison took possession of the ball at their own 15. A fumble on third down, however, gave Crockett the ball inside the Garrison red zone. Three plays later, Delane slipped into the end zone and when Cruz converted the extra point, Crockett led 14-0 with just over two minutes gone in the second quarter.

Garrison’s next possession ended with an interception by Purvis-Torres and Crockett was in business once again. Unfortunately, the Crockett offense was stymied and forced into a punting situation. A bad snap on the kick gave the ball right back to Garrison on the Crockett 35.

Bland found Gipson on a screen pass for six on first down and then Gipson plowed his way ahead for four yards on second down to give the Bulldogs in maroon a first down at Crockett’s 25. An illegal procedure call pushed Garrison back five, but Gipson managed to get it back and then some as he picked up 16 yards on his next two carries.

Gipson lost a yard on the next play and Crockett’s Zandric Anderson swallowed up Miller on second down for a two yard loss. On third-and-long, however, Bland found Miller all alone in the end zone for six and when Andres Marquez connected on the PAT, Garrison had cut Crockett’s lead in half.

After the two teams exchanged possessions, Crockett had one last chance to score before halftime when the Garrison long snapper sailed the ball over the punter’s head, giving Crockett the ball at the Garrison 24 with less than a minute left in the half. Delane picked up eight yards on first down and Collins threw incomplete on second stopping the clock with 16 seconds.

Back-to-back carries from Anderson moved the ball inside the 10 but on fourth and goal, Collins was stopped at the one-yard-line as time expired in the first half with Crockett leading, 14-7.

AS the second half got underway, the two teams traded punts. Crockett’s second possession began at their own 40. Easterling picked up a yard on first down, then Collins found Carruthers for eight more on second down. Collins kept it himself on third down and worked his way down to the Garrison 43.

Easterling picked up 10 but Collins was thrown for a loss back to the 35. On the next play, however, Collins connected with Wallace on a 35-yard scoring pass to make the score 21-7, after the Cruz PAT.

Garrison answered right back. Aided by several Crockett penalties Garrison drove the length of the field and scored on a 10-yard run from Gipson at the 3:30 mark of the third. Marquez converted the extra point to cut the score to 21-14.

The score remained that way until midway through the fourth quarter. Collins completed a pass to Randy Jones at midfield to keep a Crockett drive going. On the next play, Collins worked his way down to the 20.

Anderson picked up four and then Delane ripped off six to move the ball down to the nine. Bedford gained three yards on first down, three on second and then then one on third down to set up a fourth-and-goal from the two.

Coach Jimmy Thompson opted to go for a field goal on fourth down but when Garrison jumped offsides, the ball was moved to the one. Thompson then decided to roll the dice on fourth down and Bedford picked up six the hard way as he powered across the goal line. The extra point was good and with 3:21 left to play, Crockett led 28-14.

Garrison wasn’t finished yet, however. Starting at their own 44, they drove inside the Crockett 10-yard line and with 44 seconds left in the game, Bland connected with Miller on a two-yard TD to make the score 28-20. The extra point was no good, but Garrison was back in the game.

Everyone on both sides of the field knew it was coming, but somehow, someway, Garrison recovered an onside kick and set up shop at the Crockett 35. They managed to get down to the Crockett 20 with 15 seconds left to play, but back-to-back penalties pushed them back to the 30.

The Crockett defense slammed the door on the next play as they tackled Bland for a loss while the final seconds ticked off the clock, giving Crockett the 28-20 win.