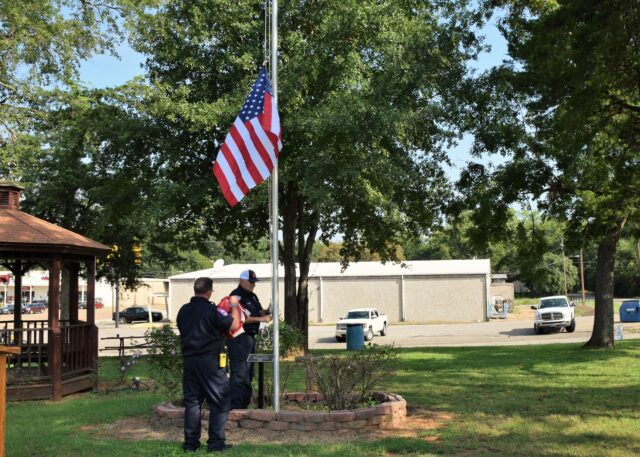 EAST TEXAS – On Friday, Sept. 11, the nation paused in remembrance of the horrific tragedy that transpired 19 years ago. While nearly two decades have passed since the tragic events of a bright, sun-filled September morning in 2001, the nation continues to mourn those lost in the terrorist attacks while honoring those who were willing to risk all to save their fellow Americans.

Throughout the country, ceremonies to honor the victims and heroes of 9/11 were held and the East Texas area was no different.

Just outside of Elkhart, the Anderson County Livestock Exchange hosted a breakfast for veterans as a part of a 9/11 Remembrance Ceremony.

Prior to the event, co-owner of the Exchange, Kirk Smith, spoke about the day.

“It’s one of those days where you remember exactly where you were when it happened and what you were doing. It is kind of a strange feeling and it bothers me that the remembrance of 9/11 seems to be waning off. We lost a lot of Americans that day and it was a very tough situation for the country,” he said.

One positive thing that came from the tragedy, Smith said, was the sense of unity and oneness that swept over the country following the attacks.

“It was inspiring to see how the country pulled together. I went to New York shortly afterwards. You could hardly find an NYPD or NYFD hat to wear. They were sold out everywhere. All my kids wanted one, so I literally had to go all over New York to find five hats. Now, you can’t seem to give them away,” he said.

“That bothers me,” Smith continued. “Veterans have always been close to my heart. My father was a veteran of World War II. He was awarded a Purple Heart and a Bronze Star. Remembering veterans has always been important to me. So, we thought we would have a breakfast today for veterans and have the VA rep from Rusk come up and talk to some of the vets around here. Some of them still think they have to go to the VA Hospital but we have Veterans’ Choice now. There are easier ways for them to get treated and get care. We just wanted to honor the veterans with a traditional military meal, SOS or chipped beef on toast with hash browns and thank them for their service.”

Traveling south on US Hwy 287, city/county officials, first responders and other residents gathered in the park across from Crockett City Hall for a remembrance ceremony which began at 9:45 am.

Pastor Tim Allen opened the ceremony with a commemorative prayer and then paused for a moment of silence at 9:46 am, the time when the first airplane struck the Twin Towers.

Following the prayer, Houston County Judge Jim Lovell addressed those in attendance. He began by thanking Mayor Dr. Ianthia Fisher, City Administrator John Angerstein and the Crockett City Council for hosting the event. He also thanked the first responders for their service to the city and the county.

“I know exactly where I was. It was unbelievable. My feelings were of denial, shock, anger and then grief, just to name a few. I’ll bet many of you had those same feelings and know exactly where you were. We were discussing that earlier this morning. America was changed forever on the morning of Sept. 11, 2001,” he said.

Lovell quoted former New York City Mayor Rudy Giuliani who said of the attacks, “The lesson of 9/11 is that America is truly exceptional. We withstood the worst attack of our history, intended by our enemies to destroy us. Instead, it drew us closer and made us more united. Our love for freedom and one another has given us a strength that surprised even ourselves.”

“You see,” the judge continued, “when Americans lend a hand to one another nothing is impossible. The events that happened on 9/11 don’t define us. We are about what happened on 9/12. On 9/12, our country unified in a way I’ve never seen it before and I would like to see it again. Nineteen years ago and one day, we came together like never before. It has been 19 years and time goes on, but let us never forget.”

Dr. Fisher was next to speak and said, “In spite of what is going on in the world today, we are grateful to be able to come together for this memorial event.”

The mayor also thanked the city administrator and City Secretary Mitzi Thompson for putting the event together.

“Today, we remember on Sept. 11, 2001, America – the home of the brave and the land of the free -experienced a terrible, life-changing disaster. We remember with sorrow and compassion the loss of so many lives, the shattering of so many dreams – dreams of what might have been. We remember the devastating impact on families, the destruction of property even the altering of our heritage and our history,” she said.

Once she concluded her remarks, the US flag flying over the park was lowered to half-staff by firefighters from the Crockett Fire Department.

The ceremony was closed by Pastor Leon Wallace who led the attendees in a prayer of protection for the community, first responders, the nation and the men and women of the armed forces.