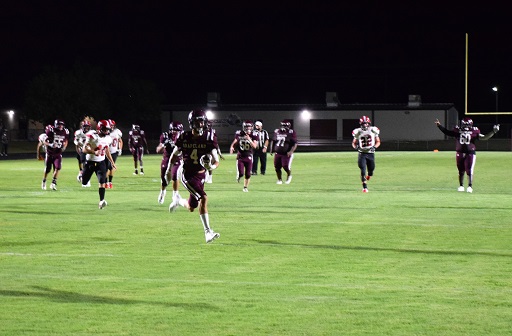 GRAPELAND – The Grapeland Sandies hosted their first home game of the season a week early thanks to Hurricane Laura, which knocked out power to the Shelbyville Dragons’ stadium. The last minute change didn’t seem to rattle the teams as both played hard throughout the contest before Grapeland clinched the 32-19 win.

The Sandies came into the game with high hopes for the 2020 season after three straight appearances in the Regional Semifinals. The Dragons, meanwhile, were coming off of back-to-back playoff appearances in football, but had knocked Grapeland out of the basketball postseason the last two years. Needless to say, the Sandies had a little payback in mind when the two teams took the field.

With it being the first game of the season for both teams, there were some butterflies to be expected. The Dragons received the opening kickoff and on their first play from scrimmage – at their own 33 – Shelbyville put the ball on the ground. Grapeland’s Keizion Ashford bounced on it and gave the Sandies great field possession at the Shelbyville 27.

Grapeland moved down to the 20, but on third and three, the Sandies gave the ball back to the Dragons on a fumble scooped up by Shelbyville’s Tre Cartwright at the 17.

The Dragons picked up 25 on first down on a nice run from DayDay Davis. Grapeland’s Michael Dancer made a nice pass break up on a first down from the 42 which was followed by a pick-up of four yards by QB Jakory Standley. On third and six, however, Shelbyville put the ball on the ground once again and Lakerian Smith was there to scoop it up for Grapeland.

Smith motored his way down to the eight-yard line of the Dragons, putting the Sandies in an excellent position to score. Ashford picked up five yards on first down but Cadarian Wiley lost two on second, setting up a third and goal from the five.

After a timeout from Shelbyville, Grapeland QB BJ Lamb showed he hadn’t lost a step from last year as he slipped around the right side of the offensive line and outraced the Dragon defense to the pylon for the first points of the game.

On the try for two, Lamb connected with Ashford to give the Sandies an early 8-0 lead.

Shelbyville struck back on their possession, however. Starting at their own 39, Davis ripped off a 16-yard scamper and picked up an additional 15 from a facemask call on the Sandies. Following a one-yard pick up from X’Zavier Cartwright, Standley found a seam in the Grapeland defense and went 29-yards for a TD. Ricardo Castillo added the extra point for the Dragons to make the score 8-7 with time winding down in the first quarter.

Grapeland started its next possession on their own 30. Wiley picked up nine yards on two carries and then Lamb managed to slip a tackle on his way to a 54-yard gain, down to the Dragon’s seven. On the very next play, Lamb connected with Ashford for a scoring strike. Ashford followed up his TD with the two-point conversion as he took a pitch on a reverse and found the end zone to give the Sandies a 16-7 lead.

As the second quarter got underway, the Dragons started a long, time-consuming drive that saw them move the ball inside the Sandies’ red zone. On fourth-and-six, however, Smith managed to drop the Dragon ball carrier for a loss to give the ball back to Grapeland.

Following the turnover on downs, Grapeland was unable to generate any offense and was forced to punt. Shelbyville also struggled offensively and thanks to sacks from Smith and Jason DeCluette, the Dragons also had to kick the ball away.

With time becoming a factor in the first half, Grapeland took possession at their own 43. Wiley picked up six on first down, followed by a run of 15-yards by Lamb. The Grapeland QB managed to pick up another 10, but a loss and an incompletion put the Sandies in a third and 14 situation.

As the clock slipped under two minutes left in the half, Lamb dropped back to pass. He was pressured and forced to step up in the pocket. At about the same time, Riley Murchison broke free across the middle and Lamb hit him in stride. Murchison turned on the jets and went 26 yards to pay dirt to put Grapeland up 22-7 with 1:49 left to play in the second. Ashford added the two-point conversion to end the first half scoring as the Sandies took a 24-7 lead into the locker room.

Grapeland opened the second half with the football but couldn’t generate any offense and was forced to punt.

The Dragons got down the Grapeland 14 but on fourth and three, the Sandies’ D rose up to shut Shelbyville down, forcing a turnover on downs.

A fumble by Grapeland gave the ball right back to the Dragons and Standley managed to take it in from 15 yards out to cut the score to 24-13 at the 3:17 mark of the third quarter.

Just when it seemed Shelbyville might creep back into the game, Lamb took matters into his own hands. On the first play after the kickoff, Lamb went straight up the middle and outran the Dragons’ to the end zone for a 60-yard TD. Ashford added the two-point conversion to the Sandies up by a score of 32-13.

The two teams slugged it out for most of the fourth quarter as Grapeland stymied the Shelbyville offense until a terrible call late in the final period of play.

With the clock under three minutes, the Dragons faced a fourth-and-goal from the 12-yard line. Standley scrambled, with the Grapeland D hot on his heels. He spotted his receiver, Grady Clay running a fade route to the back of the end zone. Standley heaved the ball but it was overthrown. Clay may have nicked it with a fingernail as the ball dropped to the ground for an incompletion. However, as Clay slowed up, the ball lands two yards ahead of him. It hit the ground and bounced right back to him.

In perhaps the worst call this reporter has ever seen, the officials conferred – and after nearly 10 minutes – they ruled a touchdown for Shelbyville.

Despite the call, the Sandies managed to run out the clock and pick up the season opening win by a final score of 32-19.