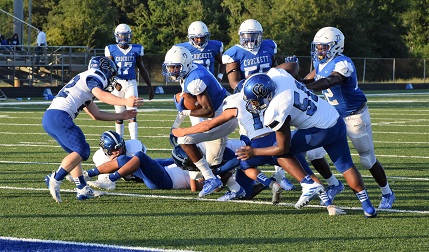 CROCKETT – The Crockett Bulldogs opened their 2020 football campaign last Saturday night with a tilt against the Corrigan-Camden Bulldogs. The game had been moved from Friday because of the threat of severe weather and by the end of the game, it looked as if the Bulldogs from Corrigan-Camden had been hit by a hurricane as they fell to Crockett by a final score of 60-7.

Corrigan started off with possession of the ball at their own 17 and after an initial first down, Crockett’s D stiffened. Corrigan’s Anthony Harrell was thrown for a loss and then Crockett’s AJ Wallace sacked Corrigan QB Christian Hood for a loss of five. On third and 16, Zandric Anderson batted a pass down at the line of scrimmage to force a Corrigan punt.

A good punt return set-up Crockett on the Corrigan 36. From there, Keshun Easterling picked 12, Randy Jones added 11, Easterling added another 12 and then QB Jadyn Collins found the end zone from four yards out to give the hometown Bulldogs an early 6-0 lead.

The next possession for the visiting Bulldogs ended in disaster after staring out with great promise. An offsides penalty against Crockett wiped out a four yard loss and was followed by a 10-yard pickup from Jesus Flores.

A facemask call tacked on 15 yards to put Corrigan near midfield. From there, things went south in a hurry. Flores ran the ball three straight times but only picked up four yards, setting up fourth-and-six. Corrigan opted to go for it, rather than punt and that turned out to be a mistake.

Demuntreon Bedford through the line and into the backfield, where he chased down the Corrigan QB. As Bedford tackled him, the ball squirted free and into the waiting arms of Anderson who returned the ball 40 yards for a TD. Antonio Cruz drilled the PAT and with 3:37 left in the first quarter, Crockett led 13-0.

Following the kick, Corrigan took possession at their own 22. Two plays later, a fumble gave the ball right back to Crockett at the 25.

JB Johnson picked up 13 on first down and on the next play Collins took it the rest of the way to pay-dirt, pushing the lead to 20-0 after the Cruz XP.

Things didn’t get any better for Corrigan on the ensuing kickoff as a fumble gave the ball right back to Crockett on the Corrigan 30. On the next play, Collins connected with Ty White for a 30-yard scoring strike to push the Crockett lead to 26-0.

A three-and-out brought the first quarter to an end, but at the 10 minute mark of the second, Collins found Wallace on a swing pass and the big tight end rumbled 43 yards to the end zone. The extra point was good and gave Crockett a 33-0 lead.

Following yet another punt from Corrigan, Crockett managed to find the end zone once again. Once again, Collins connected with White who was wide open and took the ball to the house for 38-yard TD.

Crockett added another TD just before the second quarter on an eight yard run from Johnson to make the score 47-0 as the two teams went to their respective locker rooms for halftime.

Corrigan finally got on the scoreboard with 1:35 left in the third. After switching to Morgan Rayburn at QB, Rayburn managed to drive Corrigan down to the four-yard line where he found a little running room around the left side of the defense for a TD. Nelson Flores added the PAT and at the end of three quarters of play, Crockett led 47-7.

On the Bulldogs next possession, Easterling took a handoff and went straight up the middle for a 54-yard scoring romp to extend the Crockett lead to 53-7. A late scoop and score by Angel Walker gave the Bulldogs their final margin of victory at 60-7.

The Bulldogs hit the road next week as they travel to Rusk to take on the Rusk Eagles. Tickets for the game will go on sale at Crockett ISD Administration Office Tuesday Sept. 1 thru 12 pm on Friday Sept. 4. Crockett ISD has been allotted 425 tickets. These tickets will be sold on a first come/first serve basis. No tickets will be sold at Rusk ISD and no passes of any kind will be accepted. Everyone attending the Crockett at Rusk game must have a pre-purchased ticket to enter the stadium. All tickets are $5 and are for General Admission Seating.