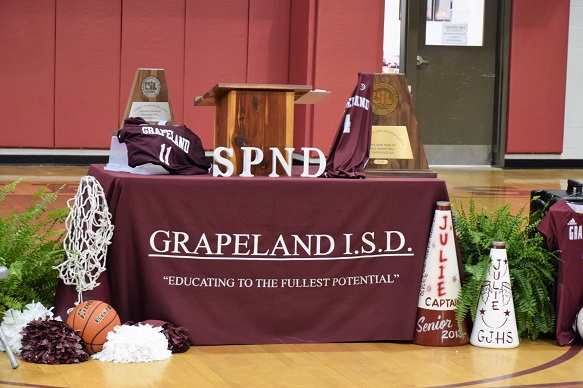 GRAPELAND – For the last several years, the initials SPND have been seen and used around Grapeland ISD. It stands for Sandie Pride Never Dies. While it’s fairly easy to figure out what it means on face value, to see it in action is truly a thing of beauty.

From Tuesday, May 19 until Wednesday, May 27, anyone who witnessed at least one of the 49 individual graduations of the Grapeland High School Class of 2020 learned just how much the administrators and staff truly care about their students. They also saw what SPND looks like when put into action.

After the last diploma was handed out, The Messenger sat down with GISD Superintendent Don Jackson and GHS Principal Katie Doughty to discuss what went into insuring all the Class of 2020 seniors would have a graduation to remember.

Reflecting back to when they first learned a traditional graduation was likely to be put on hold, Doughty said one of the first things they did was to hold a meeting with herself, senior class officers and Cindy Huff, the Director of Student Services.

“We had a Google Hangouts meeting and told them things will most likely look different. We didn’t have the full regulations yet, but we knew it would probably be limited. We opened up the floor and let them collaborate on it,” she said.

The principal said recent graduate Cooper Ward said he would like to have his graduation at the football field where he had fond memories of playing for his dad, Athletic Director Terry Ward.

“We had two seniors who were really big on FFA and Cooper said what if we let them do it at the Ag Building? Then, Carmen (Page) came in and said what if we do it at all six different locations? Cooper also spoke up for some of his friends who played softball and baseball and that’s why we added them,” Doughty said.

The next step, according to the principal, was to gather the Campus Improvement Team together and present the idea to them. The team was made up of Kristen Jackson, Megan Kendrick, Elizabeth Ward, Doughty and Huff.

“We started planning. Someone developed a spread sheet with time slots. We were only going to do it the last week of school. Mr. (Don) Jackson came in and said that’s going to be a lot. Maybe we can spread it out over the last two weeks. I was thankful for that suggestion because that would have been impossible to do it just the last week,” Doughty explained.

The next step was to fill in the time slots with students. She explained the team worked with the individual students to find out what would work best for them to get them scheduled.

“There was a lot of planning that went into this. There was no way we could have pulled this off without a full team effort. It started with the kids and went through all the staff. Our District Nurse (Kristy Word) came in and ran (health screening) protocols. Teachers helped check temperatures and our Behavior Specialist Mr. (Woodrow) Jones helped run the parking lot. It was a full team effort,” Doughty said.

She also thanked Marsha Cook who volunteered to take pictures which would later be merged into a slide presentation by APEX Sound Professionals for a virtual graduation ceremony. The presentation will include addresses by the Valedictorian Bryan Perez and Salutatorian Alyssa Dilli. It also included Cadie Bell Currie and Jessie Payne leading the Pledges to the American and Texas Flags as well as Senior Class Officers Madelyn McCombs, Carmen Page and Cooper Ward addressing their peers.

Getting this all approved wasn’t nearly as difficult as putting it together, Superintendent Don Jackson said.

“I just called County Judge Jim Lovell and told him what we were doing. We didn’t go through the TEA. We followed the TEA guidelines, but I called Judge Lovell and he was the one who signed off on it,” he said.

Doughty added the GISD team also consulted with Grapeland Mayor Balis Dailey on the graduation ceremonies, specifically about blocking off a street during graduations in front of the Ag Building.

Speaking of the Ag Building, the day of graduation in front of the building saw one graduate receive his diploma but after that, the rain came.

“We went inside,” Jackson explained. “We went into a classroom. That was probably the greatest challenge we faced – having to move from the outside to the inside and then later to move back outside. We had the first and last ceremonies outside. Everything in between was inside. But, it was smooth. The transition was smooth and we were able to pull it off.”

The graduation team even went out to a senior’s house on the second day of graduation.

Doughty explained as the time neared for one young man’s graduation, he was nowhere to be found. A call was placed to his dad and Doughty also talked to the student. She explained the student was a little shy and didn’t want to be the center of attention at an individual graduation. However, Doughty said, he had earned the right to graduate and if he didn’t want to come to them, the graduation team would come to him.

“I told him I was coming out there and was bringing three people. I don’t think he believed I was coming. Well, I got there and went inside with a mask on and talked his dad and to (the student). I told him I brought three people and he said he had already looked outside and there were more than three. I told him I meant I was bringing three in my car. We wound up having the ceremony in his front yard. He earned every ounce of that graduation and I didn’t want him to miss out,” she said.

“That was another highlight of the graduation ceremonies. For me to see that happen, I knew we had the right principal. I had known before, but that was confirmation. It was the right thing to do. I think the situation may have been a little overwhelming so to take that to him was special. The thing I will never forget was the look on his dad’s face – and later from his mom – that look of appreciation that we did that for his son. That was a very memorable moment in my career. I have been in this business 32 years and that is one of the most memorable moments. When I got in the car to leave, I looked back and he was smiling. I thought to myself, this is what education is all about,” Jackson said.

On a personal note, I am a 1982 graduate from Grapeland High School. In the nearly 40 years since my graduation day have seen the school district go through both extreme highs and extreme lows. This last week, however, after witnessing the time and effort put forth to give the Class of 2020 a graduation they will always remember I have never been more proud to call myself a Sandie. Best of luck to all the recent graduates as you go forward in life and always remember SPND!