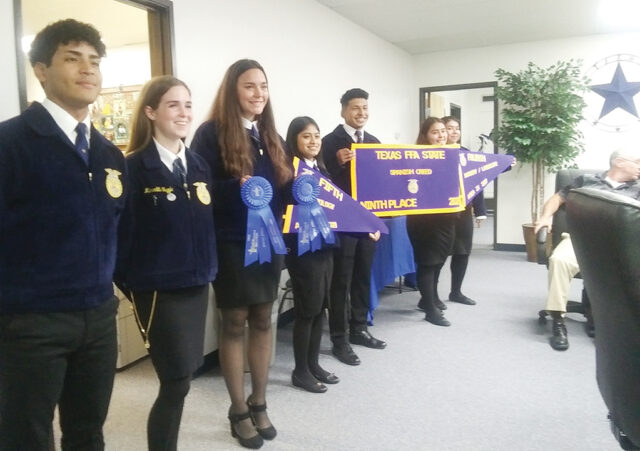 FFA Shines During Board Presentation

The meeting was called to order by board president, Dr. John Garner. Following the Pledge of Allegiance and opening prayer, the floor was open for scheduled public comments. The board then approved the minutes from the previous meeting and moved on to the Superintendent’s Report.

Superintendent John Emerich welcomed officers and members of the Crockett FFA for a presentation about the program’s progress, recent activity and future plans, as well as an update on recent accomplishments during various competitions, including the state level. The students were met with applause both during and after their presentation.

Following the Superintendent’s report, the board discussed and approved several other agenda items, including the proposed tax rate for the coming year. The board unanimously approved a total tax rate of 1.1387%, which is a two cent decrease from the previous year. Board President Dr. John Garner said during the discussion that the school tax has not increased in the past 13 years, and this is the third consecutive year for a decrease.

Also approved was the acceptance of donations to the school from an anonymous donor working through Houston County SHARE and Wal Mart. The anonymous donor in conjunction with the SHARE program will be providing backpacks and school supplies to all elementary students in Crockett ISD. Wal Mart is donating bottled water and fresh fruit to the athletic department to be used during two-a-day practices beginning this summer.

Crockett ISD was also the recipient of multiple mini grants from Walmart totaling $4,500 to be split evenly among the three campuses. The donations were unanimously approved by the board.

Another agenda item which was discussed at length was regarding approval of a resolution prohibiting non-enrolled student participation in UIL activities.  Most board members were in agreement that the recent approval by the Texas legislature to allow homeschool students to participate in sports and other UIL activities is too vague regarding grades and testing, allowing homeschool students an unfair advantage regarding participation. Also mentioned was the possibility that the measure opens the door for recruiting, drug testing and liability issues. Board Secretary Karen Norman expressed that she felt more discussion was necessary due to a lack of information, and some homeschool students could be kept from opportunities to compete. After several minutes of discussion, a motion and second were made to approve the resolution. Norman was the lone member to vote against the measure, therefore the resolution passed.

Other items approved by the board are as follows:

Board members Stephen Tuggle and Gerald Colter selected as delegate and alternate to the TASA/TASB convention in Dallas on Sept. 25

2021/22 Compensation plan including stipends and retention

Childcare agreement between Crockett ISD and The Treehouse Academy

Consideration appointing individuals to authorize grants and/or compliance reports, sign MOUs and enter into contracts on behalf of CISD as a designee of the superintendent