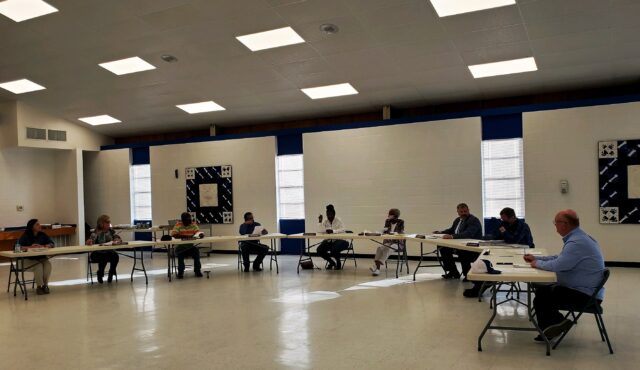 CROCKETT – The Crockett Independent School District Board of Trustees met in a regularly scheduled meeting on Monday, April 27 in what turned out to be a relatively quick session.

The meeting was called to order shortly after 6pm by Board President Lela Wheeler. With no public comments, the first order of business was the approval of the consent agenda.

Once the consent agenda items were approved, CISD Superintendent John Emerich provided the trustees with his monthly report.

“Just a couple of real quick things. If you will notice in your packet we have information on student accident insurance. It is basically the same as last year. There is nothing changing in that. The next item is Eduhero. I don’t know how many of you have completed a class in Eduhero, but there is some board training that can be done on those. There is a new course called Cybersecurity Security Training. Last year, from House Bill 3, it was something put in there that everyone has to complete, including you guys,” the superintendent informed to the board.

The next item on the agenda pertained to the sale of surplus property.

“This is something that periodically has to be done,” Emerich said. “We have four buses on the list this time. There are two of them we think we can sell and get some money for. There are also two on the list that are not running. We are asking for your approval to dispose of them.”

After a brief discussion, the measure was unanimously approved.

The final item during the open part of the meeting concerned the summer feeding program through an initiative called Meals-to-You.

“If you remember last year, this is how we did our summer feeding program. We just have to have your approval,” Emerich said.

Business Manager Tamra Scroggins added, “We did the East Texas Food Bank last year. They provided meals just when we were in school – during that June timeframe. This Meals-to-You is where the parent or the students can go on this website and the meals will be sent to their homes in a box all summer long – not just the month of June. We felt like this was a better option for our students. We just need to get the word out and encourage those parents and students who are old enough, to go online and fill out the application in order to receive those boxes. Now they (students) will get meals delivered to their homes from June to the start of school.”

The motion was unanimously approved. More information on the program can be found on the CISD website at www.crockettisd.net.

Following the feeding program discussion, the board adjourned into executive session to discuss personnel matters.

When the trustees emerged from behind closed doors, it was announced Chanel Howard-Veazy had been offered a contract to serve as the CISD Assistant Superintendent. For more information on the newly hired assistant superintendent, please see the Sunday, May 3 edition of The Messenger.