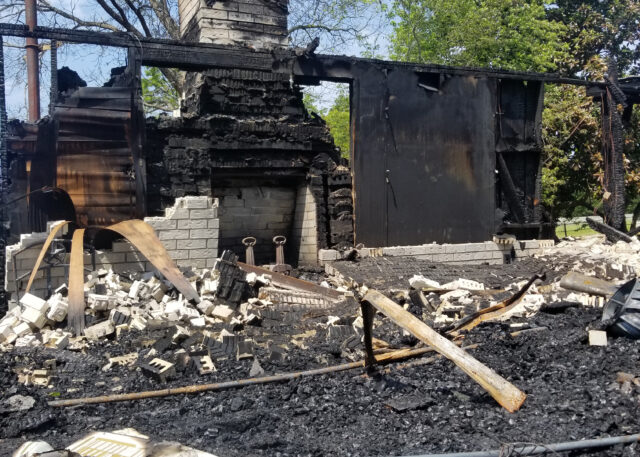 LATEXO – As the world concentrates on a viral pandemic and economic downfalls, one local family endured another fiery hardship they were not expecting.

Holly Waller and her partner, Jerry Davidson, experienced a life-changing event that has turned their world upside down. On April 18, as the two parents were getting ready to put their five children to bed, Waller decided to complete a load of clothes she had already started drying earlier that day.

After examining the contents of the dryer, she decided to run the load of clothes once again because several of the items were still damp. Waller stepped outside after starting the dryer and within minutes of the appliance being turned on, the family was jolted by a large explosion.

The alarmed parents quickly investigated the noise to find the gas dryer had been the cause of the chaos and that a fire had been ignited by the gas line. With nothing more than their pajamas on, the family safely escaped.

After moving the children to a safe distance, the couple called 911. While Waller was on the phone with a 911 dispatcher, Davidson was able to shut off the gas line that was feeding the fire and continued to use their water hose to prevent the fire from expanding.

“Within minutes, our home was gone,” Waller said, “We did what we could to keep the fire contained, but once it got to the roof – there was no saving it.”

The home had been a part of the Waller family since 1982 when the family moved to Latexo from Baytown, Texas. The house had become ground zero for numerous family reunions over the years and the catalyst of warm memories to the family.

“Everyone knew this house and the Wallers, with Nana (Carolyn Waller) running the Latexo Cafe for 12-years and Papa (Ronnie F. Waller) working for P-Chem around 20-years,” Waller said.

“To lose a place like this is heartbreaking, but what really blows my mind is the support that I have received from the community,” Waller said, “There has been so many people that has reached out to us offering to help from local officials, businesses, churches and random people we have never even met before.”

“Right now, we are still going through all the things we have been gifted. if there is anything we cannot use, we will be donating the remaining items to SHARE which is a non-profit program that provides clothing and food to area families in need,” Waller said. “With things the way that that are right now, I know there are other families that could use help as well and I want to continue to pay it forward to show others kindness like I have seen.”

Jordan Bridges may be contacted about this article at jbridges@messenger-news.com