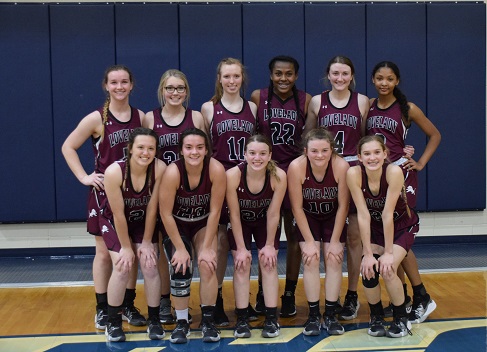 JEWETT – The Lovelady Lions are out to prove all who doubted them wrong as they continue on their playoff journey. First there were the Cayuga Lady Cats who Lovelady took care of on Tuesday of last week.

On Friday, they traveled to Leon High School for a matchup against the Marlin Lady Bulldogs. In the final regular season rankings, Marlin was ranked #13 and had won the District 18-2A title while Lovelady was unranked  and finished third in District 20-2A.

The smart money was on the Lady Bulldogs but it appeared no one told the Lady Lions because they came out and held last year’s Region III finalist to only two points in the first quarter on their way to a 44-22 win and the Area Championship.

The two teams played a very different style of basketball. Marlin was physical and looked to use their size inside to wear down opponents. Lovelady, however, stood toe-to-toe and gave the Lady Bulldogs a dose of their own medicine.

Aniya Williams scored the only two points for Marlin in the first quarter.

Meanwhile, Lovelady’s Kaiden LeMaire worked inside for six while Baylee Granberry connected on a three-pointer. Rajanae Polhamus added two points as the Lady Lions led 11-2 after the first eight minutes of play.

The second quarter got a little chippy as Marlin began to get a bit more physical in the paint. McKenna Johnson and Alisha Williams both scored three while Kiyana Quinn added two and Kendria Trotter had one.

LeMaire was the only player to score for the Lady Lions in the second quarter as she put in six to help Lovelady take a 17-11 lead into the locker room at halftime.

Following the break, Marlin looked gassed as the Lovelady defense began to frustrate the Lady Bulldogs offense. Williams scored three while Amiyah Mason hit a pair of free throws. In addition, Johnson and Yasmin Maxwell each had one.

Polhamus came alive for the Lady Lions as she knocked down seven points. Granberry and Kameron Negrete split the other four as Lovelady led by a score of 28-18 after three periods of play.

In the final period of play, Marlin went ice cold from the field. Williams dropped in three while Johnson added one to close out the Lady Bulldogs scoring.

Lovelady, meanwhile increased the tempo in the final period of play and pulled away to win by a final score of 44-22. The Lady Lions fourth quarter points came from Granberry with seven and Polhamus with six. Shyanne Pipkin dropped in two and Madelyn James converted one of two from the line.

On the game, Marlin was led in scoring by Aniya Williams with eight points and McKenna Johnson with five. Alisha Williams added three while both Amyah Mason and Kiyana Quinn had two. Yasmin Maxwell and Kendria Trotter both added one.

The Lady Lions were led in scoring by Rajanae Polhamus with 15 points while both Baylee Granberry and Kaiden LeMaire had 12 apiece. Rounding out the Lovelady scoring, Kameron Negrete and Shyanne Pipkin both had two while Madelyn James dropped in one.

The win moved the Lady Lions into the Regional Quarterfinals where they faced the Crawford Lady Pirates. As of press time, however, the final score was unavailable.