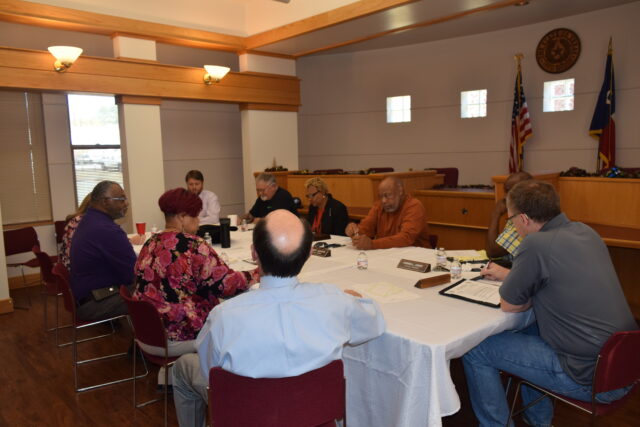 CROCKETT – The saga of the proposed Dodge dealership in Crockett came to an official end on Tuesday afternoon, Nov. 19 when the Crockett Economic and Industrial Development Corporation (CEIDC) was given the green light by the Crockett City Council to purchase the land back from the property owner, J. Davis Real Estate.

During the fall and winter of 2016-2017, the owners of Gulfgate Dodge purchased land in the Crockett Industrial Park with the intent to locate a new Dodge dealership on the property. Unfortunately, because of a projected economic downturn, the dealership never materialized.

As the Monday afternoon meeting got underway, Crockett Mayor Dr. Ianthia Fisher informed those in attendance that the council, along with several CEIDC board members, would retire into a closed door session to discuss a real estate transaction.

The agenda item to be discussed stated the council would “… consider CEIDC’s purchase of property -10.92 acres located at Enterprise Drive and 2.67 acres located at S. Loop 304 Crockett, Texas.”

Approximately five minutes later, the council and CEIDC members emerged from the executive session and re-opened the meeting to the public.

“We discussed the details of (agenda) item four and terms of the re-acquisition of the land. With the information that was provided, not only did they get the land back but also got an additional frontage onto the land which was lower than the price paid originally,” the mayor said.

A motion was made, seconded and approved to move forward with the purchase of the land.

The next two items on the agenda pertained to the Fiscal Year Economic Development Administration’s Disaster Supplement Grant.

“Due to the City of Crockett being included in one of the counties of the Presidential Disaster Declaration of 2018, Disaster 4416, additional funding has been set aside for those counties to help recuperate in other ways to help bring in revenue that was lost during that disaster,” City Administrator Johns Angerstein informed the council.

The disaster the city administrator was referring to involved the heavy rainfall during November of 2018. He explained the government had made available close to $50 million in funding for counties included in the disaster declaration with a $2 – 2.5 million damage threshold per entity.

He explained the first step in acquiring the federal funds would be the solicitation and submission of requests for qualifications (RFQ) for engineering services along with requests for proposals (RFP) for grant administration.

“We are looking at the development of the CEIDC’s property in the Industrial Park by putting in new water lines, gas and broadband, fiber optic cable. Along with that will come repairs to the roads by putting in a new road down South Fifth Street,” he said.

“The goal,” he added, “would be to help develop the south side of our town out to the loop (Loop 304) and to bring our Industrial Park up to speed with higher broadband and better water service, along with the roads.”

The city administrator said there were two types of grants one which had an 80/20 match and the other with a 70/30 match.

It was unanimously approved to move forward on the solicitation of RFQs and RFPs.

Following the meeting, CEIDC Executive Director James Gentry was asked how much the land was when originally purchased from the CEIDC. He replied the initial transaction was for $146,000 while the purchase price in 2019 was $100,000.

Asked why Dodge decided not to move forward, Gentry replied, “Economy. The economy is not contributing and had drawn from Chrysler a review of the whole region. From their standpoint, they are projecting a possible recession within the next two years.”

“With that in mind,” he continued, “and with the loss of jobs we have seen here in the last two years, their optimism shifted. That was part of the problem. They were not only looking at now but also three years down the road. Are we going to be in a position here we have cars sitting and gathering dust or will we see (product) turnover?”

Gentry said the ownership team regretted the decision to scrap the dealership in Crockett and added, “It was an unfortunate thing in the way it turned out. We are able to acquire our property back as well as the frontage which we had tried to get for years.”