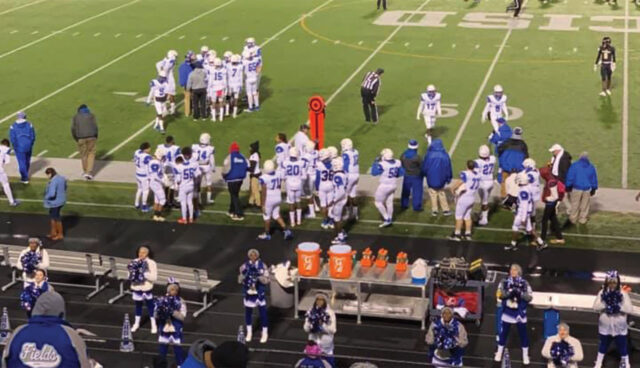 Win Moves Crockett to Area Round

CONROE – The Crockett Bulldogs opened their postseason with a game against the Anahuac Panthers in Conroe on Thursday night, Nov. 14.

As the game got underway, the Bulldogs looked hungry and had a look in their eyes that said they would not be denied. On their first possession of the game Crockett drove the ball down the field and into the Anahuac red zone.

On a second and six from the 11, Amyron Dixon found a crease in the Panthers’ defense and slipped into the end zone for the game’s first score. Antonio Cruz hammered home the extra point and with just over nine minutes left in the first quarter, Crockett led 7-0.

After an Anahuac possession went nowhere, Crockett regained possession of the ball and once again marched deep into Panther territory. With the ball at the Panthers’ 12-yard line, Bulldog QB Jordan Bedford spied wide-out Cristian Brice in the end zone and threw a bullet that was hauled in for the TD at the five minute mark of the first quarter.

The Cruz PAT made the score 14-0, but the Bulldogs’ scoring barrage was just getting started. A turnover by the Panthers gave the ball right back to Crockett and Bedford didn’t waste any time making Anahuac pay.

This time, the QB hooked up with receiver Shannon Bacon from 12 yards out to make the score 21-0, after the Cruz extra point.

The Bacon TD brought the first quarter scoring to an end and as the second period began, Anahuac seemed to have found an answer for the Bulldogs’ offensive attack.

The Panthers’ defensive scheme held Crockett out of the end zone until the clock crept under three minutes remaining in the first half. That was when Bedford dropped back to pass, saw Bacon breaking free behind the secondary and threw a 27-yard TD to his receiver. Cruz made the XP and sent the Bulldogs to the locker room at halftime with a 28-0 lead.

Following the break, the Bulldogs salted the game away. On their opening possession, Joseph Porter, Jr. broke free for an eight-yard TD to make the score 35-0, after the Cruz PAT.

After Anahuac turned the ball over on downs, the Bulldogs found themselves back in the end zone when Bedford hit Emanuel Aldaco on 14-yard pitch-and-catch for six points.

Now up by a score of 42-0, Coach Jimmy Thompson let his foot off the throttle a little bit but not before Bedford connected with Bacon for their third touchdown of the night. This one came from 41 yards out at the start of the fourth quarter and made the score 49-0.

That was the way the game would end as Crockett defeated Anahuac by a final score of 49-0 to win the Bi-District Championship. The victory moves Crockett into the Area Round of the playoffs where they will face the #6 ranked Troy Trojans. The game will be held on Friday, Nov. 22 with a 7:30 pm kickoff. The site had not yet been determined as of press time.