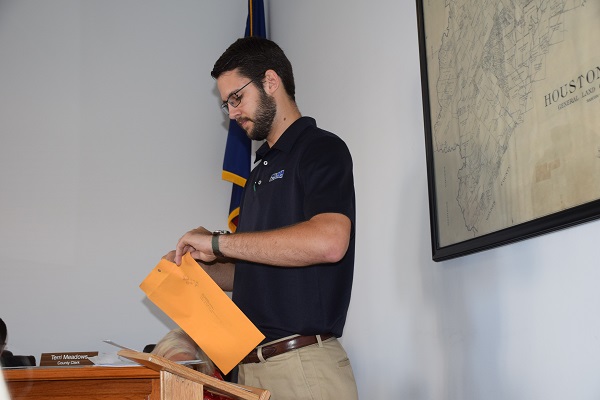 HOUSTON COUNTY – As the Oct. 22 edition of the Houston County Commissioners Court got underway, a bid opening process was held for the 2018 Road Improvements Texas Community Development Block Grant #7218219.

The county received four bids on the project, however, no action was taken on the matter. Following the bid opening, the actual meeting got underway.

As the actionable items portion of the meeting got underway, Roger Dickey was reappointed as the Houston County Fire Marshal for the period of Oct. 22 through Oct. 21, 2021.

The next two items on the court’s agenda concerned donations. The first donation was from the Crockett Elks Lodge #1729 in the amount of $2,500 to the Houston County Senior Center for meals.

The second donation was a 2004 Chevrolet Silverado 2500 truck from Houston County Search and Rescue to Precinct One. Both donations were accepted by the court.