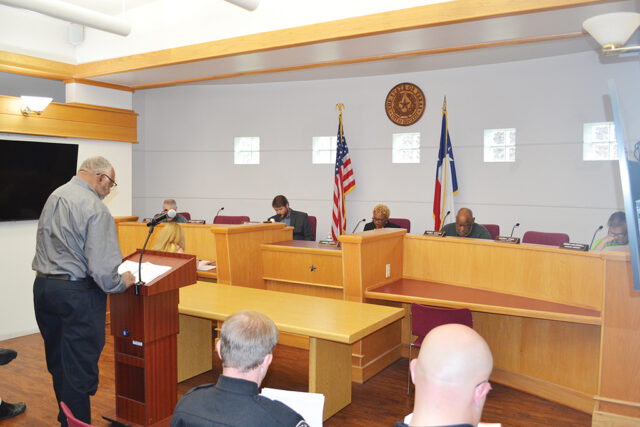 CROCKETT – Crockett Mayor, Dr. Ianthia Fisher, called a regular meeting of the Crockett City Council to order on Monday evening. Following the invocation and Pledge of Allegiance, the council approved the minutes from the previous meeting, then got down to the business at hand.

Among the items for consideration was the annual budget for the Crockett Economic & Industrial Development Corporation. Executive Director James Gentry presented the budget to the council. After a brief discussion, the budget was unanimously approved.

Also considered by the council was a proposal to authorize City Administrator John Angerstein to enter into an agreement with Tyler Technologies, Inc. to update the city’s software to Incode. Angerstein explained the importance of updating the current software system, which will be obsolete in the very near future. He cited many examples regarding the ability of the new system to streamline much of the city’s ability to operate, such as collecting data and billing for services, all of which would lead to a savings following the initial cost. After consideration by the council, the measure was unanimously approved.

The council went into executive session to consider the annual performance evaluations of Police Chief Clayton Smith, Fire Chief Jason Frizzell and City Administrator John Angerstein. Upon returning to open session, the council “favorably approved” the evaluations of all three, and officially welcomed them for another year of continued service.

Also considered and approved on the agenda;

• Consideration and approval of the city’s proposed tax rate, to be finalized at a later date.

• Approved extension of depository agreement until Aug.31, 2023 with Prosperity Bank.

• Approved an ordinance terminating the contract with American Municipal Services Corporation (AMSC) for the collection delinquent fines, fees, court costs and other debts.

• Approved a contingent fee contract with Perdue, Brandon, Fielder, Collins and Mott, LLP pursuant to article 103.0031 of the code of criminal procedure, said contract being for the collection of delinquent government receivables owed to the City of Crockett, and notice of said contract posted with the agenda in accordance with chapter 2254 of the government code.

• Approved an ordinance providing for a fee to defray the costs of collecting delinquent fines, fees, court costs and other debts pursuant to article 103.0031 of the Texas code of criminal procedure.