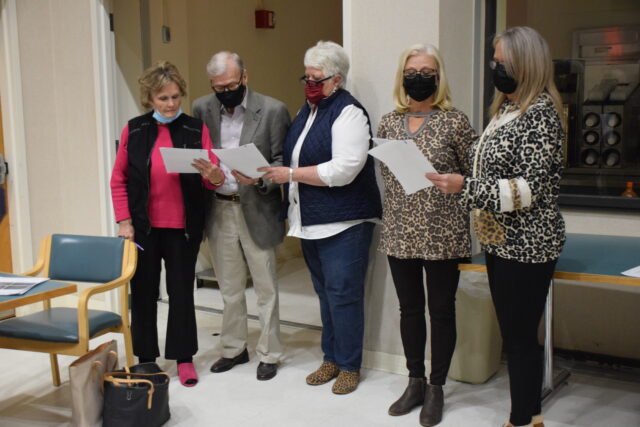 HOUSTON COUNTY – The Houston County Hospital District (HCHD) Board of Directors met in a scheduled meeting on Tuesday, Nov. 17 highlighted by the canvassing of votes, the selection of new officers and reports from the hospital as well as the ambulance service.

“It was a hectic but wonderful election,” she began. “In front of you, you have a spread sheet which is broken down by precinct and grand totals. There is also a copy of the print out from the computers on election night.”

Lum said over 70 percent of registered voters cast their ballots in the HCHD Nov. 3 election “… which I think is a record for the county.”

A motion was made to accept the results as presented by Lum. It was seconded and unanimously approved. Following the canvass, the board members who were up for election were sworn in.

The next item of business concerned the reorganization of the HCHD board. The Nominating Committee had recommended a slate of officers comprised of Barbara Crowson as president, Dr. John Stovall as vice-president and Erin Ford as secretary.

The slate of officers was unanimously approved as presented.

As the meeting continued, Cassie Gallaway, the Operation Supervisor at Houston County EMS, provide the board with a report on the ambulance service. She reported during the month of October there were 291 requests for service of which there were 216 transports. The helicopter was requested 29 times and made six flights. Mutual aid was provided to ESD 1 eight times during October. Gallaway added 70 percent of transports went to Crockett Medical Center (CMC) while 16 percent went to Palestine Regional.

The next report was from Tommy Johnson the CEO of CMC. Johnson reported the emergency department saw just over 600 patients in October while there were 15 in-patient stays. There were 1,112 out-patient procedures. There were also 230 clinic visits along with over 300 telehealth visits. He added there 30 surgical procedures.

“I did want to speak a little bit to the COVID-19 numbers,” Johnson continued. “Every time they go up, it changes our response here at the hospital. What we are probably going to do, instead of completely shutting down one entrance, we are going to shut down two entrances, one on the front side of the building and one on the back. Everyone will have to be screened again.”

He said he retrieved the Texas Department of Health and Human Services numbers earlier in the day which showed almost all the counties around Houston County had nearly tripled.

“We have been running between 13-to-15 (positive COVID-19 cases), but we have 53 pending positives to be confirmed as of today. Please be cautious,” Johnson said.

The CEO went on to say he had recently spoke with the legal firm which represents the HCHD board and was informed many other entities were going back to virtual meetings as the COVID-19 numbers continue to rise.

“I would look for, the discussion has been to limit meetings to 10 once again. It has not happened through an executive order yet, but I look for that to come down the pipe at some point. Up in Lubbock and in the Panhandle, they have tent hospitals set up now. Lubbock only had 13 available beds for transfer-ins last week. The issue for us is, if we start taking patients from other areas, our challenge is going to be staffing. Even now, the agencies we reach out to have got their nurses everywhere else. They sent three busses from this area up to Amarillo to help. It’s spiking everywhere and I don’t know what to think of it. I don’t know how we are going to control it other than by what we do in our groups and in our communities,” Johnson added.

For more on the Nov. 17 HCHD Board of Directors meeting, see the Thursday, Nov. 26 edition of The Messenger or visit our website at www.messenger-news.com.