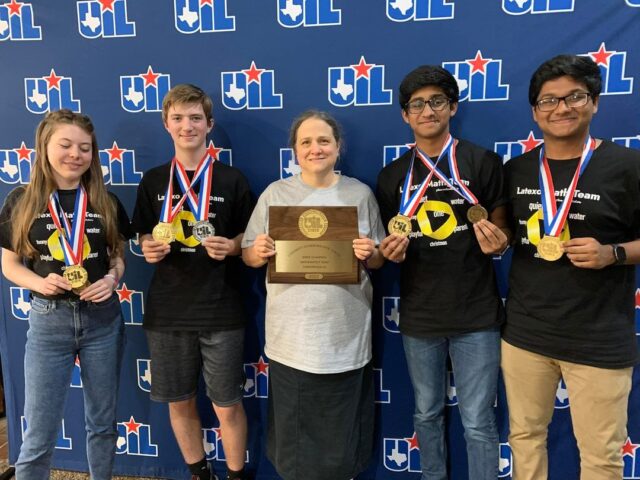 HOUSTON COUNTY – The schools of Houston County have long been known for producing champions in the athletic arena with multiple state championships in football, basketball, baseball, track and golf.

Don’t let the athletic prowess fool you though. The oldest county in Texas also produces some pretty smart cookies as evidenced by the results from last weekend’s UIL Academics State Championships.

Moving to Class 2A and Journalism, Lovelady High School probably showed more knowledge about Current Issues and Journalism than most newspapers (including this one) in the region.

As a team, Lovelady’s Magali Castillo and Katie Thompson brought home the gold in Journalism. In addition, Katie won an individual bronze medal in Copy Editing, a silver in Feature Writing and a gold in News Writing. She wrapped up the day with by winning “Tops in Texas” for the event, competing with the top students from Class 1A through 6A schools.

Magali and Katie were not the only Lovelady representatives in Austin, however, as Kannon McWhinney finished fifth in Current Issues.

Also representing Houston County and you can stop me if you’ve heard this one before, the Latexo High School Math team won the State Championship in Mathematics. Again. For the 10th consecutive year.

Also representing Latexo, Kate Walker, Ava Garrelts, Sebastian Maza, Brandie Jackson along with Parker Beavers who was there in spirit, were competing in Austin in the Calculator Applications event.

Congratulations to all the young men and women who competed in the 2022 UIL Academics State Championships and best of luck in your future endeavors.

But wait … there’s more. A few of the area schools have students competing in the 2022 UIL Speech State Meet, scheduled for May 24-25. Could there be more precious metals coming to Houston County? Check back soon to find out!!