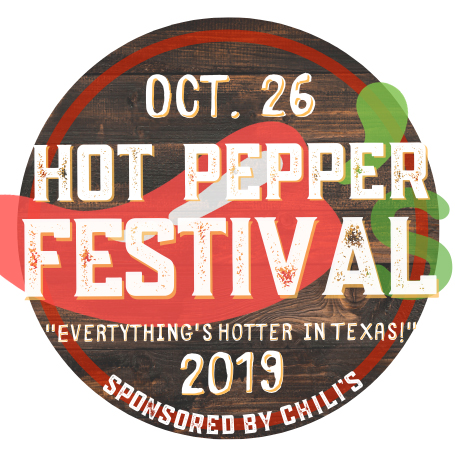 PALESTINE – Don’t put up your festival attire just yet. While the 2019 Peanut Festival wrapped up on Saturday night, next weekend brings another festival to the East Texas area.

The 2019 version of the Hot Pepper Festival rolls into Palestine on Saturday, Oct. 26 for a day chock of music and merriment.

According to Rachel Nichols, the city of Palestine’s Main St. Manager, “The festival runs from 9 a.m. to 7 p.m. Saturday in the city’s historic downtown district with live music, food and merchandise vendors and a free Children’s Zone with activities and games.”

The event will feature five bands playing throughout the event. At 11 a.m., Pushwater takes the main stage – located at the corner of Main and John Streets – and will feature traditional and contemporary country western music.

At 2 p.m., Diamondback Texas will hit the stage playing a blend of traditional country and 80’s rock. Once Diamondback Texas completes its set, MELO – a rap artist from – Houston will entertain the crowd, starting at 4 p.m.  Roadkeeper will take the stage at 5 p.m. and the quartet will feature alternative rock music.

“The newest addition to this year’s event will be a Street Dance from 7 to 10 p.m., sponsored by Chili’s, on Crawford Street in Old Town. The Magills—playing a blend of Americana, gospel and rock— will perform during the Street Dance in Old Town Palestine, sponsored by Chili’s. The dance will be held in the 300 block of Crawford Street from 7 to 10 p.m.,” Nichols stated.

Aside from the live music, food and vendor booths, the Hot Pepper Festival will feature a free Kid’s Zone, with activities located throughout the festival including a mechanical bull, Zorb Ball water racing, a Rock Wall, the Cosmic Tunnel, bounce houses, laser tag and slides.

“A highlight of the annual event will be the Hot Pepper Eating Contest, sponsored by Brookshires, on the Main Stage starting at 1 p.m., with the winner receiving $200, runner up receiving $100, and third place winner $50.  To enter the contest, sign up the day of the event near the Main Stage,” she said.

Chili’s is partnering with the festival this year for a major giveaway: A dinner a week for a year (valued at $25 a week) for a lucky festival attendee. To qualify, simply purchase food or merchandise from festival vendors and receive a chance to enter the drawing with each purchase.