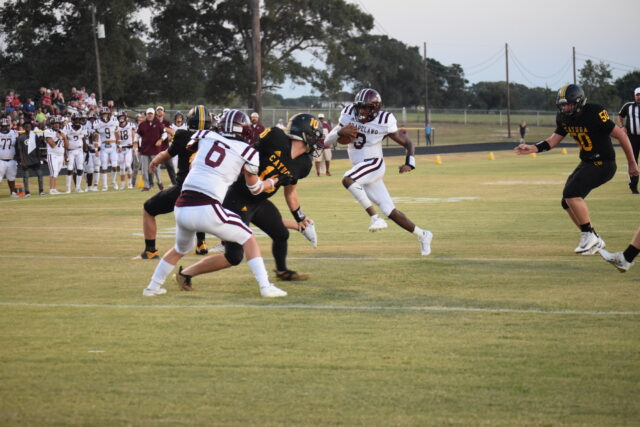 CAYUGA – The #5 ranked Grapeland Sandies stayed on the road this past Friday as they traveled to Cayuga for a non-district matchup against the Wildcats. Both teams came into the game with identical 1-0 records and each had hopes of remaining undefeated after the contest.

For a while, it looked like it might be anyone’s game. In the end, however, Grapeland’s defense showed why it is starting to garner some early-season notoriety while the offense showcased its vast array of weaponry as the Sandies blasted past the Wildcats by a final score of 38-14.

The Wildcats won the coin toss and elected to receive. The decision proved to be a wise one as Cayuga landed a haymaker on the initial kickoff. An 80-yard return for a touchdown followed by a two point conversion from Casen Grasch gave the Wildcats an 8-0 lead before the majority of fans even had a chance to get seated.

The Sandies struck back with a strong kickoff return of their own. Deco Bryant fielded the ball at the Grapeland 22 and maneuvered his way down to the Cayuga 26 before he was dragged down.

After a two yard pick-up from Cadarian Wiley and an incompletion from BJ Lamb, Grapeland was hit with a an illegal procedure call which pushed them back to the 30. Wiley picked up five on third down but Grapeland found itself in a fourth and 10 at the Cayuga 24.

Coach Terry Ward rolled the dice early in the game as Lamb connected with Cooper Ward for 14 yards and a first down at the Wildcats’ 10.

With a new set of downs, Wiley picked up two on first down. Lamb added another two on second before Wiley found a crease in the Cayuga defense and found the end zone from six yards out with 8:02 left in the opening quarter.

The try for two was good as the Sandies used a bit of trickeration. After the snap, Lamb pitched to Bryant who lofted a pass to Ward for an unusual two-point play that tied the score at eight.

Following a failed fake punt attempt, the two teams swapped turnovers as the Sandies fumbled and Cayuga’s Caden Mullican was picked off by Grapeland’s Kaden Dupree at midfield.

On the second play from scrimmage after Dupree’s interception, the Sandies executed a hook-and-ladder play to perfection. Lamb hit Ward on the hook and Ward lateraled the ball to Keizion Ashford who worked his way down to the Wildcats’ 10-yard line.

A pair of penalties backed the Sandies up to the 25-yard line, but on second and 25, Lamb threw a dart to Bryant in the front of the end zone for six. The try for two was unsuccessful but with 11:54 left in the half, Grapeland pulled ahead 14-8.

Following an exchange of possessions, the Wildcats tied things up at 14 when Casen Grasch bulled his way into the end zone from 10 yards out.

The next time Grapeland had the ball, the Sandies reclaimed the lead and never looked back. Faced with a third-and six from their own 41, Lamb connected with Ashford for 11 yards to move into the Wildcat end of the field.

Next, Lamb found Justin Bobbitt for 15 followed by a 32-yard TD catch and run from Lamb to Ward at the 3:44 mark of the second quarter. Wiley slipped into the end zone for two as the Sandies staked themselves to a 22-14 with 3:44 left in the half.

Grapeland had another chance to score before the break but was unable to extend their lead when Lamb was picked off right before the buzzer.

While the Sandies may have wasted an opportunity at the end of the first half, Grapeland came out in the second half and put the game away on their first possession of the second half. After a holding penalty pushed the Sandies back to their own 27, Lamb connected with Bryant, Ashford and Ward to move the ball to the Cayuga 26.

From there, Lamb took the rock the remaining 26 yards to stake the Sandies to a 28-14 lead with 8:24 left in the third. Ashford took the ball in for the two-point conversion on a double reverse to make the score 30-14.

A late third quarter score on a 14-yd TD pass from Lamb to Bryant gave the Sandies a 36-14 lead while Lamb crossed the goal line with the game’s final two points to give Grapeland a 38-14 win.

On the game, the Grapeland offense racked up 427 total yards on the night while the Sandies’ defense held Cayuga to 87 total yards of offense.

Junior linebacker Cooper Sheridan finished the game with a team high 21 tackles and two tackles for loss. Junior defensive back Keizion Ashford had two interceptions and one pass deflection while Grapeland QB BJ Lamb completed 17 of 23 passes for 279 yards and three touchdowns. He also rushed 12 times for 51 yards and one touchdown.

After the game Coach Terry Ward discussed his team’s performance.

“To stop the Cayuga offense and hold them to only one touchdown, I thought our defense played excellent,” he said.

“We gave up a touchdown on the opening kickoff and I was kind of curious to see how we would respond,” he continued. “Our kids just marched right down the field and did what they had to. Then, our defense stepped up. They gave up that one touchdown, but then those jokers played lights out. Coach (Blake) Doughty did a really good job getting those guys ready. They executed and played well.”