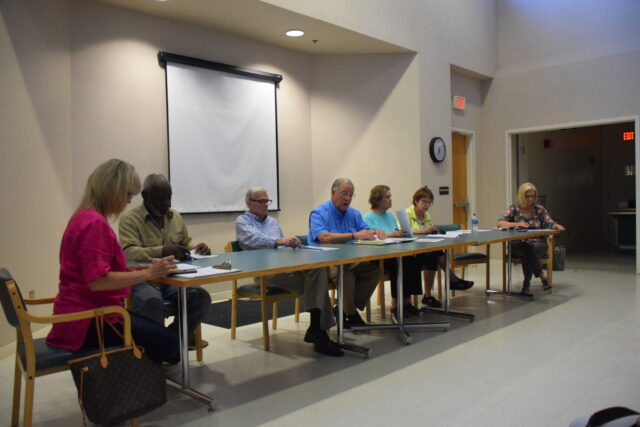 HOUSTON COUNTY – The Houston County Hospital District (HCHD) Board of Directors met in a called meeting on Tuesday, May 14 to canvass the votes from the May 4 election.

There were five places up for election on the first Saturday in May – Places 1,3,5,7 and 9 – and all five were contested.

The meeting was called to order by HCHD Board President Dr. Bob Grier who asked Board Secretary Barbara Crowson to provide the invocation.

Once the prayer concluded, Grier indicated the only item of business before the HCHD was to canvass the votes from the May 4 election.

“Board,” he said, “I believe you have in front of you the tabulations from the election. I have the raw data here if we need to check or question anything.”

Grier said the total number of votes by precinct totaled 2,659.

Crowson will return as the Place One elected representative.

Dickey will return to the Place Three position she was initially appointed to represent.

Ford will take over as the newly elected Place Five representative.

Dawson will return to her position as the Place Nine representative.

“Are there any comments, questions or clarifications?” the HCHD Board president asked.

With no questions or comments, a motion was made to accept the canvass as is. A second was provided and the board unanimously approved the motion.

Following the vote, Grier questioned Houston County Elections Administrator Cynthia Lum, who was present at the meeting, what needed to be done next.

“I will e-mail you this (the results) in a spread sheet so you can post it on your webpage. If you do not have a webpage and wish for the county to post it, we will do that also,” she replied.

Before the meeting was adjourned, a question about why the two new board members were not sworn-in at the Tuesday night meeting.

Grier said the two new directors – Bruner and Ford – would be sworn-in at the next board meeting scheduled for May 21.

With no further business, the meeting was adjourned.