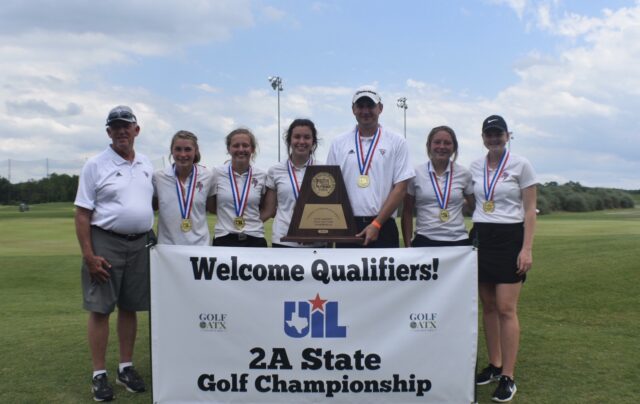 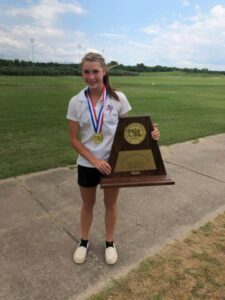 BoydAt the turn on Day Two, the Sandiettes were in prime position to put the tournament away. Hannah Chipman paced the Grapeland golfers with a 37, while Cheney Boyd had carded a 39. Carly Parker was right behind her with a 40 and Mary Jane Watson was creeping up the leaderboard with a 42.

On the back nine, Grapeland was not to be denied. Boyd amped it up a notch to shoot a 36 and finish her round with a 75. Chipman carded a 41 to finish with 78. Parker pt up her steady pace and matched her front nine score of 40 to finish the round with an 80 while Mary Jane Watson also shot a 40 to finish with a second day total of 82.

Tori Woodford rounded out the Sandiettes’ team with a second day score of 98.

For the tournament, Boyd recorded a score of 154 to finish fifth. Sandiettes Chipman, Parker and Watson all carded 165 to finish in a three-way tie for eighth, while Tori Woodford shot a two-day total of 199.

ually with a two day total of 142. Katelin Berry of Stratford was second with a 147 while Maddie Barrinton from Olney and Kenley Nixon from Martin’s Mill tied for third with a combined 153.

On Day One, the Sandiettes recorded a combined 334 while Martin’s Mill was only a shot back with a combined 335.

an 83, while teammate Carly Parker was tied for 10th with an 85. Just outside the top 10 was Hannah Chipman with an 87. In addition, Tori Woodford carded a 101.

Also competing at the state tournament was Lovelady Lady Lion Baylee Granberry who shot a 97 on the first day of competition and a 99 on Day Two to finish with a combined total of 196.

District 18-3A All-District Baseball Team Announced
The Year in Review: Sports – Part One
Sandies Fall to Indians in Shootout, 64-42