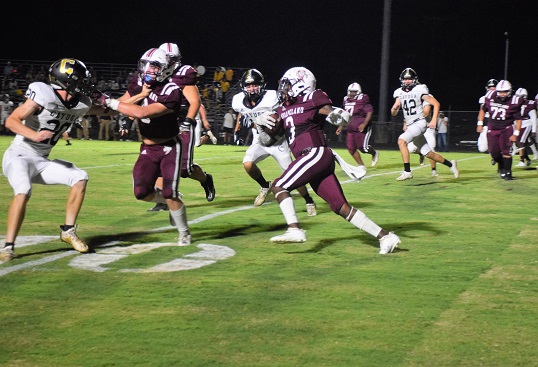 GRAPELAND – It took a little while last Friday for the Grapeland Sandies’ offense to get going, but when Grapeland finally clicked, it was too much for the Cayuga Wildcats to handle as the Sandies scored a touchdown on three consecutive touches to put the game away and walk off the field with a 36-20 win.

At the end of the third quarter, Grapeland was hanging on to a 16-13 lead. Cayuga had driven into the Grapeland red zone as the final period commenced and appeared poised for the go-ahead score.  A pair of Wildcat penalties, however, pushed the ball back to the 25 and put Cayuga in a second-and-21.

As they had been doing all night, when needed most, the Grapeland D bowed up. Omarian Wiley stepped in front of a pass from Wildcat QB Jacorie Bradley for an interception to give the ball to the Sandies at their own 11.

Cadarian Wiley picked up 14 yards on the first play after the turnover while Riley Murchison connected with Zandric Anderson for 18 more on the next play. C. Wiley bulled ahead for two more yards to move the ball out to the 45.

Following a Murchison-to-Anderson reception for five, Murchison threw incomplete. What followed next was something to behold.

On the next snap, the O-line opened a huge hole and C. Wiley scampered through it on his way to a 50-yard TD romp. The try for two was good as Murchison found Jax Vickers in the front of the end zone and with 7:41 left in the game, the Sandies had opened up a 24-13 lead.

After the kickoff, the Wildcats took over on their own 46. On the next play from scrimmage, however, William McClendon broke through the line and blasted the Cayuga QB. The hit jarred the ball loose and McClendon pounced on it at the Wildcats’ 40.

To no one’s surprise – on first down – Murchison turned and handed the rock to C. Wiley. The O-line appeared to have worn down the Cayuga D-line as Wiley saw another huge gap and raced 40 yards to the end zone to make the score 30-13, 23 seconds after his last TD.

To their credit, the Wildcats didn’t just roll over. Starting at their own 42, Cayuga rode the legs of Chase Hearrell as Hearrell carried the ball three times in a row to move inside the Grapeland 20. Following a 2-yard Jadan Henry carry, Hearrell capped off the drive as he bulled his way into the end zone from 14 yards out to cut the score 30-20, following the Taron Maiden extra point.

Still – with over four minutes remaining – the Wildcats were still in it and attempted an onside kickoff which the Sandies pounced on at their own 40-yard line. The Grapeland fans then witnessed history.

On first down, Murchison turned and gave the ball to C. Wiley. Once again, the offensive line opened up a hole big enough to drive a Mack truck through and C. Wiley outraced everyone as he crossed the goal line from 60 yards out with his fifth touchdown of the evening.

Wiley’s TD run put the Sandies up by 16 and put the game out of reach for the Wildcats as Grapeland hung on for the 36-20 win.

Not only did the game end with a bang from Wiley, but it also started with a bang. On the opening kickoff, Cayuga attempted an onside kick. Grapeland’s Kaleb Gardner recovered the attempt to set up the Sandies on the Wildcats’ 47.

A two-yard pick up from O. Wiley was followed by the first of older brother Cadarian’s five TDs on the night as he broke free on the Sandies’ second play from scrimmage for a 45-yard TD gallop. Wiley also added the two-point conversion to make the score 8-0 with only 48 seconds gone in the contest.

When the Wildcats got the ball, they began a lengthy drive which culminated with a Bradley to Austin Moore 15-yard TD. Hearrell knocked home the extra point and with 6:02 remaining in the first quarter the score stood at 8-7.

Following the Wildcats’ score, Cayuga attempted another onside kick. This time it was successful and the Wildcats took possession at their own 48. Bradley was sacked on first down for a five-yard loss and Murchison slapped away a second down pass.

What occurred next was one of the best plays of the night. Hearrell dropped back to pass and found Greg Barrett all alone. Barrett turned up field and raced toward the goal line. C. Wiley, however, had other ideas. The speedy senior, who runs a 4.4 40, kicked in the afterburners, tracked down Barrett at the two and knocked him out of bounds. On the next play, the Wildcats fumbled and believe it or not, C. Wiley came up with the ball, giving the Sandies possession at their own one.

Grapeland was unable to do anything offensively and the Sandies were forced to punt. Cayuga took over at their own 36 and launched a time-consuming drive which ended with a one-yard plunge for six at the 8:10 mark of the second quarter.

The try for two was no good but the Wildcats had taken their only lead of the night at 13-8. The lead didn’t last very long as the Sandies came roaring back.

Back-to-back holding penalties put Grapeland in a first and 30 hole. A two-yard loss by Murchison pushed the Sandies back to the 27 and it looked like the Sandies might be forced to punt yet again. On third and a half acre, however, C. Wiley went in motion out of the backfield and ran a go-route along the Grapeland sideline.

Murchison saw C. Wiley start to break free from the coverage and threw the ball towards the running back. C. Wiley had to slow up a little for the pass and made a great catch over the top of a Wildcat defender. When he landed, the defender had fallen, but C. Wiley kept his balance and raced the last 25 yards to paydirt. O. Wiley added the two-point conversion to give the Sandies a 16-13 lead, a lead they wouldn’t relinquish.

Cadarian Wiley finished the game with 283 yards rushing and four touchdowns to go along with 89 receiving yards and another TD. He also added a two-point conversion.

The Sandies (now 2-1) are back in action on Friday night as they host the Class 3A DI Kirbyville Wildcats (1-1) at Sandie Stadium. Kickoff is scheduled for 7:30 pm.