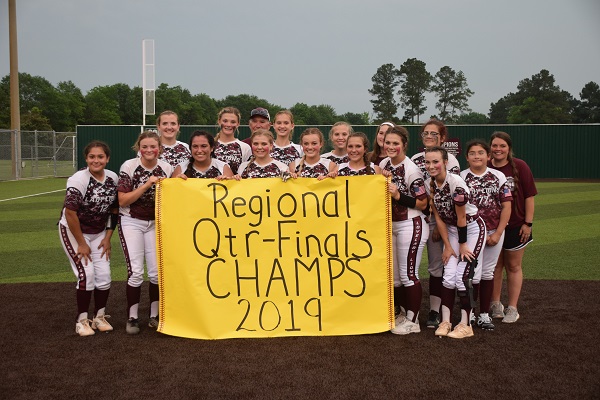 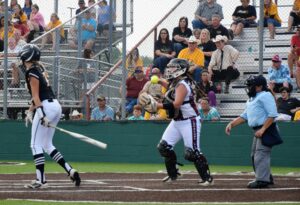 ovelady seem to be adapting quite nicely. On Thursday, May 9 they climbed up another notch in the postseason as they defeated the Woden Lady Eagles by a final score of 5-2 to capture the Regional Quarterfinals Championship.

While the Lady Lions still have a ways to go to make it to Austin, Thursday night they showed they just might have the weaponry to play their final games of the season at the Red and Charline McCombs Field on the University of Texas at Austin campus.

The game on Thursday saw the Lady Lions jump out to a 1-0 lead in the first inning. Woden’s Reese Taylor was in the pitching circle for the Lady Eagles and she got Lovelady’s Jacy Stubblefield lead off the game with a groundout to third.

Makayla White followed Stubblefield in the batting order and 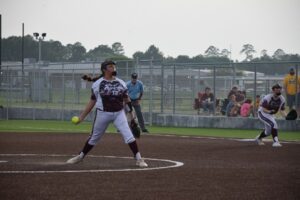 ripped a double into centerfield. Catcher Linda Martinez was up next and singled to center, advancing White to third. On the throw in from the outfield, Martinez took second.

Mimi Sandoval, who would be in the circle for Lovelady, stepped into the batter’s box after Martinez and on a 3-0 count, Taylor uncorked a wild pitch. The errant pitch allowed White to scoot home while Martinez moved to third.

Sandoval drew the walk and was replaced at first base by courtesy runner Shyanne Pipkin. Two pitches later, Pipkin stole second but that was as far as she would get as Taylor stuck out Amber Mikes and got Erin Sample to hit into a 1-3 force to end the inning.

When she took the circle, Sandoval walked the first batter she faced, Shelby Brookshire. She followed up with a str 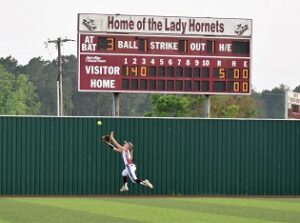 keout of Skylar Smith, a four-pitch walk to Taylor and a three pitch K of Amber Allen. Sandoval then retired the side with her third strikeout of the inning as she caught Meagan Johnson looking at strike three.

As the game moved to the second inning, fortune favored the girls in maroon. Bailee Albinus drew a walk and teammate Sarah Thompson was hit by a pitch to give the Lady Lions runners at first and second with no outs.

After a Macie LaRue strike out, the Lady Lions were back to the top of the order. Stubblefield laid down a sacrifice bunt and reached safely on an error to load the bases. White was up next and also struck out, giving Taylor a chance to get out of the inning unscathed. That, however, was when disaster struck for Woden. 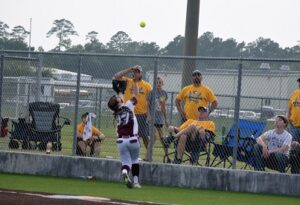 With two outs, Martinez settled into the batters’ box. On the first pitch she saw during her second at-bat, Martinez lofted a high fly ball into right. Second baseman Abby Chapel drifted back into shallow right, while right fielder Madison Christopher charged in to make the catch. The two Lady Eagles collided as the ball dropped harmlessly to the turf. Both Chapel and Christopher were shaken up on the play and as the two players laid on the field, Albinus trotted home, Thompson rounded third to score and Stubblefield showed off her speed as she scored all the way from first. By the time another Lady Eagle made it to the ball, Martinez was at third and Lovelady had a 4-0 lead.

Sandoval was up next and she singled into center to knock in Martinez to push the Lady Lions lead to 5-0.

Taylor finally managed to get out of the inning when Sandoval tried to take third on an error, but the damage was done.

After Sandoval and Taylor worked easy half innings, the Lady Eagles cut into the Lady Lions lead in the bottom of the third to make the score 5-1.

Briley Watkins struck out to open the Woden half of the third, but Brookshire followed with a walk. Smith was up next and spanked a double into the left center field gap to drive in Brookshire. Sandoval slammed the door on the Woden hitters after the run, however, as she struck out both Taylor and Allen to send the game into the fourth.

The two pitchers worked an uneventful fourth inning and Taylor had a 1-2-3 top of the fifth inning. When the Lady Eagles came in from the field, they sliced another run off of the Lady Lions lead.

Watkins led off with a bunt and made it all the way to third on an error. Brookshire followed with a single to drive in Watkins, which made the score 5-2.

Woden would get no closer as Sandoval shut down the Lady Eagles batting order, after the Watkins’ run, as the Lady Lions won the contest by a final score of 5-2.

Sandoval picked up the win in seven innings. She gave up two runs on four hits. She also struck out 12 and walked four.

Taylor took the loss as she also worked seven innings. She gave up five runs on four hits, struck out five and walked four.

The win moves Lovelady into the Regional Finals against the Beckville Ladycats. As of press time, the date, time and location of the game(s) had not yet been determined.