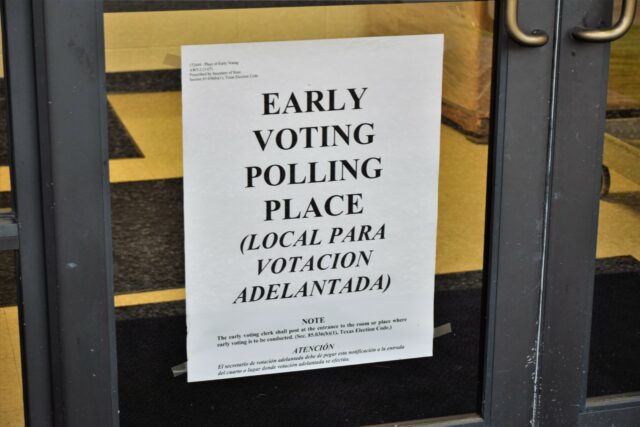 EAST TEXAS – With less than five days before the general election, many candidates are beginning to feel the pressure associated with a contested race. There are also several hot ticket items on the ballot this year and if early voting is any indication, the Houston and Anderson County areas can expect a sizable voter turnout this Saturday, May 4.

“I haven’t been here (in office) that long to make a determination, but I feel it (early voting) has picked up,” Houston County Elections Administrator Cynthia Lum said.

One of the more hotly contested races this year concerns the Houston County Hospital District. Positions One, Three, Five, Seven and Nine are up for election. As of late Tuesday morning, April 30, the early voting numbers showed 1,039 voters had cast their ballots.

In the Justice of the Peace Precinct One area, a local option is on the ballot pertaining to the sale of beer and wine. As of Tuesday morning, 567 ballots had been cast during early voting.

In the city of Crockett, the general election shows the mayoral position, along for Precincts One and Two on the ballot. In addition, voters will be able to cast their ballot in favor of or against the termination of the Crockett Economic and Industrial Development Corporation (CEIDC).

While early voting ended on Tuesday, April 30 – through Tuesday morning – a total of 598 votes had been cast in Crockett. The ballot contains both the elected positions and the CEIDC matter.

In the Crockett Independent School District (CISD), only one position is contested this year and that is District Six. So far, 88 ballots have been cast during the early voting period.

Moving to Grapeland, there are no contested races for the city council or the school board. There is a ballot initiative to transform the Grapeland Economic Development Corporation into a Municipal Development District. Through Tuesday morning, 16 early voting ballots had been cast.

Also in Grapeland, there is one contested race for the Grapeland Hospital District. So far, 23 ballots have been cast during early voting.

Moving to Elkhart, the city of Elkhart has the mayoral position along with Places Two and Four on the May 4 ballot, however city officials are reporting no early voting ballots have been cast.

In Elkhart ISD, Position Two is up for election and through Tuesday morning, 82 early voting ballots had been cast.