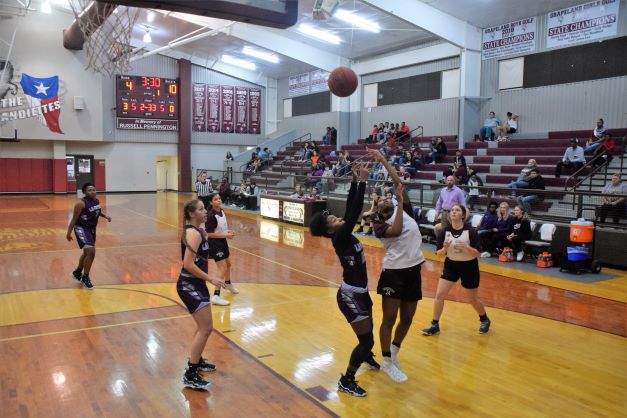 GRAPELAND – The Grapeland Sandiettes 2021-2022 basketball season tipped off last week and on Tuesday the Sandiettes welcomed the LaPoynor Lady Flyers to town for a rematch of last year’s Bi-District Championship.

The Lady Flyers won last year’s postseason contest and went on to advance to the Regional Quarterfinals. While both teams were hit hard by graduation, it appeared as if the Lady Flyers were hurt the least as LaPoynor dominated Grapeland on Tuesday night from start to finish as they won by a final score of 75-24.

The Lady Flyers took control of the game early as they raced out to a 21-7 lead after the first eight minutes of play. Kitty Eldridge and Markayla Hurd paced LaPoynor with six apiece in the opening period. T’Mia Mitchell dropped in four, Payton Maze had three and Natalie Tobin chipped in a basket to round out the first quarter scoring for the Lady Flyers.

The Sandiettes’ points came from a three-pointer from JaMIyah Bowie while both Kyelan Beazley and Cyshia Black had two apiece.

Grapeland didn’t fare much better in the second quarter as they were only able to muster five points on a three ball from Te’Lia Jones and a two from Sa’Riah Davis.

With the Sandiettes struggling from the field, the LaPoynor squad took advantage of the home team’s shooting woes to push their lead out to 43-12 by the end of the half.

Maze poured in eight during the second quarter for the Lady Flyers while Eldridge netted six. Both Hurd and Tobin connected from downtown while Riley Thaw knocked down a basket to close out the half.

After the break, Grapeland came out of the locker room with a renewed energy and played the LaPoynor squad tough in the third quarter. Black had four in the third for the Sandiettes while both Beazley and Madison Files had two each.

Tobin had five for LaPoynor while Hurd had four and Eldridge added two as the Lady Flyers extended the lead to 54-20.

The fourth quarter saw the Sandiettes run out of gas as they only put up four points on two apiece Jones and Beazley.

LaPoynor continued to keep their foot on the gas as Hurd exploded for nine, fourth quarter points. Maze and Tobin had four apiece while Thaw and Emily Richardson both added two as the Lady Flyers walked out of Grapeland with a 75-24 win.

The Sandiettes were led in scoring by Kyelan Beazley and Cyshia Black, both with six. Te’Lia Jones had five and JaMiyah Bowie added three. Sa’Riah Davis and Madison Files chipped in two apiece to round out the Grapeland scoring.

For the Lady Flyers, Markayla Hurd led all scorers with a game-high 22 points. Payton Maze netted 15 while both Kitty Eldridge and Natale Tobin poured in 14 apiece. T’Mia Mitchell and Riley Thaw added four each while Emily Richardson closed out the LaPoynor scoring with two.