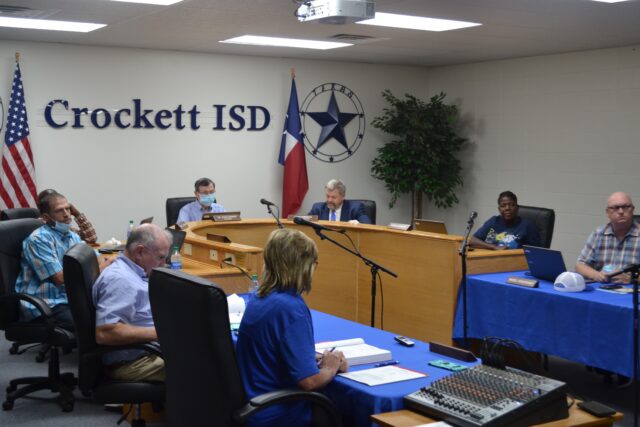 CROCKETT – The Crockett ISD Board of Trustees met on Monday, September 27 in regular session to discuss several agenda items.

The meeting opened with a report from CISD Business Manager, Tamra Scroggins, regarding the district’s performance in Schools FIRST (Financial Integrity Rating System of Texas.) The program measures the district’s management of financial resources. Crockett ISD earned a level of Superior Achievement by scoring 96%.

The public comments portion of the meeting was next. First up was Ms. Monica Pierre, newly elected President of Crockett Jr. High’s PTO. Pierre reported to the board that the newly reformed organization has hit the ground running with 26 active members and three fundraisers scheduled for the fall. The group also plans luncheons honoring the faculty and custodial staff.

Following Ms. Pierre were two concerned parents with comments regarding the facial hair policy in the Student Dress Code. While unable to comment or respond to the public comment section, the board was appreciative of the parental input.

The Board then approved consent agenda items, including minutes from the previous meeting, bills and budget comparisons and the investment report.

The Superintendents report followed. Superintendent John Emerich updated the board regarding Zoom sessions for the 87th Legislative session. Emerich also updated the board on new cameras at Bulldog Stadium which are now providing the video feed for home games. He also reported that similar cameras are currently being installed for the upcoming basketball season.

Emerich continued his report by informing the board of SB1, currently being considered by Texas lawmakers, which will require school districts to reduce school taxes by 6 cents next year, followed by a return to the regular rate the following year.

Also approved by the board during the meeting were the following items;

The board then went into executive session. When open session resumed, the board took action on changes to the 2021-2022 Student Code of Conduct regarding the facial hair policy for students. The measure failed by a vote of 4-2.