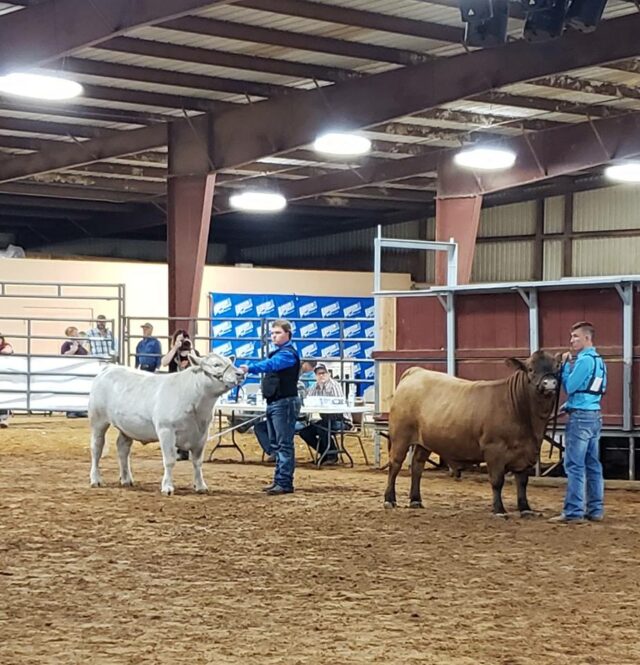 ANDERSON COUNTY – The 2019 Anderson County Youth Livestock Show kicked off on Sunday with the set-up for the event and on Monday, the judging began in four different categories. Nearly 450 entries were expected this year from the various 4-H clubs and FFA programs from the seven school districts in Anderson County.

On Monday, April 15, the action kicked off bright and early with the broiler check-in between 7 and 9 am. The broiler judging began at 10:30 am and the results showed Ky Thomas with the Elkhart FFA taking home top honors as his bird brought home the Grand Champion award. Bryleigh Barton with the Ioni Creek 4-H club took home Reserve Champion honors.

Once the heifers had cleared the arena, the market rabbits were on display. Taylor Stout, with the Frankston 4-H, was named as the Grand Champion while Bradley McMeans, from the Old Cayuga 4-H, was awarded with Reserve Champion honors.

On Tuesday, April 16, the day’s action began with the check in of breeding rabbits between 7 and 8 am. The judging started at 9 am, as the grand Champion’s award was presented to Bryleigh Barton of Ioni Creek 4-H. The Reserve Champion’s award went Brianna Looney of the Frankston FFA.

Also during this time, the project show judging commenced. In the non-sale category, the Cayuga FFA Team #1 won Grand Champion Honors and also the award for Best-of-Show for their 24-foot Gooseneck Stock Trailer.

The Palestine FFA Team #1 took home the Reserve Champion’s award for their mini-camper.

In the Sale Projects category, Preston Eldredge took home the Grand Champion’s Award for rocking chairs. Julianne Elderedge was awarded as the Reserve Champion for her porch swing.

Following the check-in for breeding goats at 11 am, the judging began which showed Heaven Paquette awarded as the Grand Champion while Cheyenne Staples took home Reserve Champion honors.

Once the breeding goats had cleared the arena, the market goats took over. Cooper Fitzgerald with the Old Cayuga 4-H Club took home the Grand Champion’s award while Raegan Hill with the Neches FFA was awarded the Reserve Champion’s award.

Additionally in the market lambs category, Cheyenne Staples – representing the Cayuga FFA – was presented with the Senior Showmanship award while Peyton Sanders, with the Ioni Creek 4-H, won the Junior Showmanship prize.

In the registered heifers division, Chad Phillip, representing the Old Cayuga 4-H Club was selected as Grand Champion while the Slocum FFA’s Andrew Abernathy was selected as Reserve Champion. In addition, Kyndal Chapin with the Ioni Creek 4-H was awarded the Senior Showmanship Prize.

After the heifers had cleared the ring, the steers were brought in. In the market steer category, Peyton Sanders, with the Cayuga FFA, was named as Grand Champion while Holden Bush, with the Elkhart FFA was named as the Reserve Champion.

It should be noted that showmanship was open only to Anderson County 4-H and FFA youth who meet the general rules and guidelines for exhibitors.