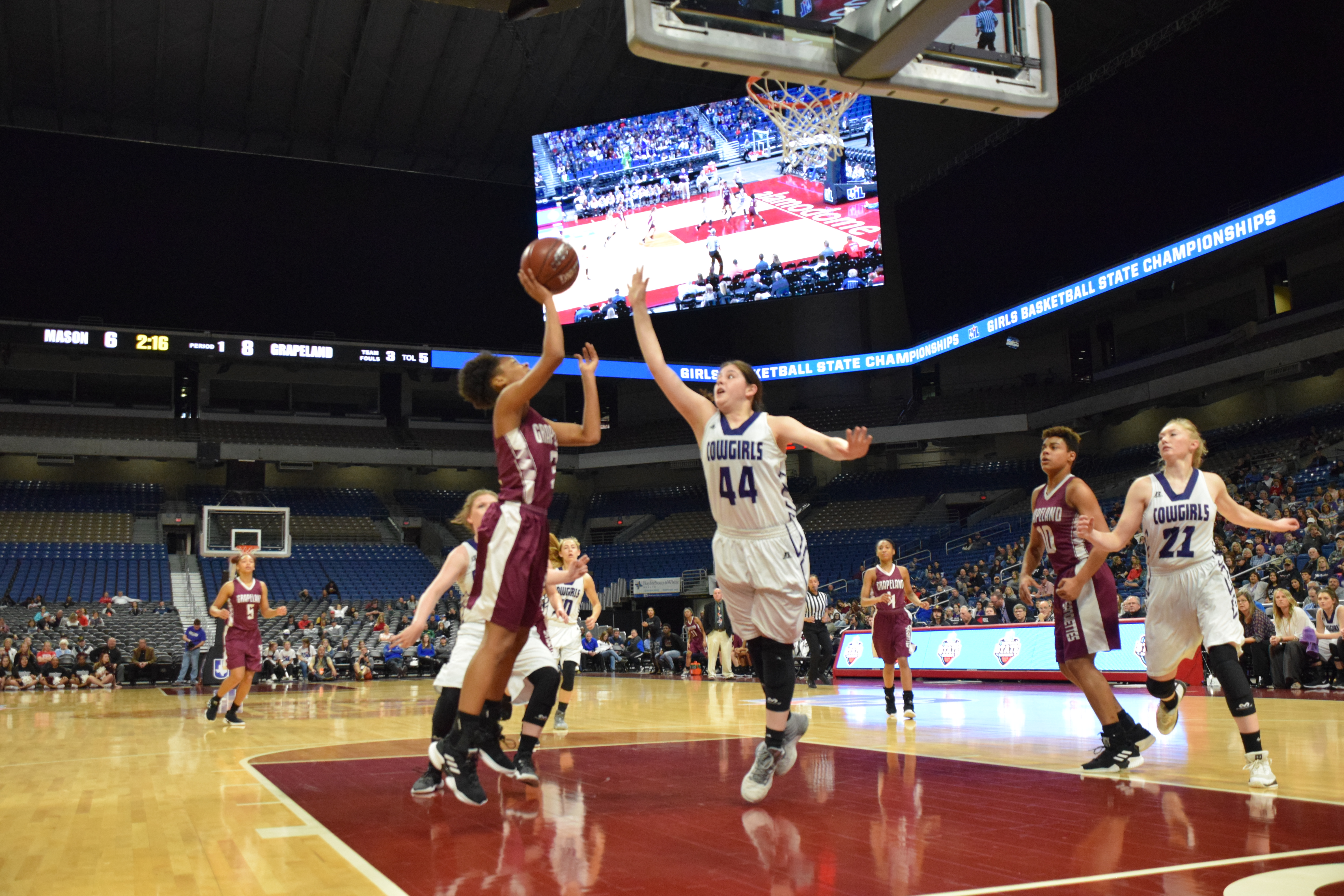 SAN ANTONIO – Following their 63-43 Regional Finals win over the Marlin Lady Bulldogs, the Grapeland Sandiettes made their reservations for San Antonio and a shot at the state title. 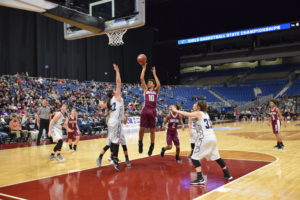 Standing in their way were three of the top 5 teams in the final regular season TABC poll: the # 1 ranked Martin’s Mill Lady Mustangs; the #2 ranked Mason Cowgirls; and the #5 ranked Panhandle Pantherettes.

Together, those three teams had lost a total of five games while the Sandiettes had eight losses all by themselves.

In the first game of the day on Friday, March 1, the Lady Mustangs slipped by the Pantherettes by a score of 49-47. 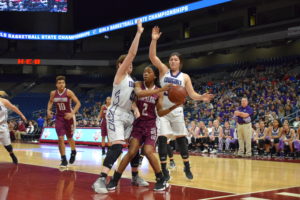 The second game of the day at the Alamodome featured the Cowgirls and the Sandiettes battling for a chance to face Martin’s Mill in the finals. While Mason was favored, it was the #12 ranked, 28-8 Sandiettes who came through in the clutch and took down the 38-1 Cowgirls by final score of 61-54.

Mason and Grapeland both got off to a slow start. The Cowgirls were hampered by early fouls while the Sandiettes just seemed a little nervous.

Eventually, the Sandiettes settled down and opened up a 14-9 lead by the end of the first quarter. Teira Jones led the way with six points while Ragan Bowie and Hannah Chipman both had three. KeKe Harris added a bucket to round out the Sandiettes’ first quarter scoring.

Ruby Magnus led the Cowgirls with four points in the first quarter while Jesse Armstrong knocked down a ee and Courtney Hanscheck added two. 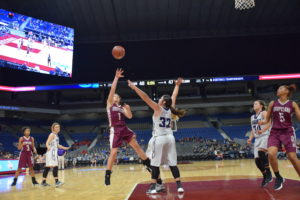 As the second quarter began, the Sandiettes used a 9-2 run to open up a double digit lead by the six minute mark of the quarter. Mason managed to keep Grapeland within striking distance, however, and whittled the lead down to six as the two teams headed into the locker rooms at halftime.

Bowie and Chipman paced the Sandiettes with five points apiece in the second quarter while Harris and Jones both added two.

The Cowgirls second period scoring came from Magnus with seven while McKenzie Cano dropped in four and Armstrong had two.

When the two teams returned to the floor after halftime, it seemed as if the Sandiettes were about to run away with the game. Back-to-back 10 second backcourt calls against the Cowgirls gave Grapeland an opportunity to pad their lead, but they were unable to take advantage of the gifts.

As a result, Mason was able to creep back into the game. In addition, Jones ran into foul trouble for Grapeland and went to the bench with s 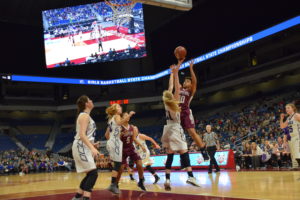 ix minutes left in the third.

The Cowgirls cut the Grapeland lead to three with just under five minutes remaining in the period, but these Sandiettes are a resilient bunch. They pushed the lead back to nine at the three minute mark, before letting it fall back to seven, 43-36, by the end of the period.

Bowie and Woods led the Sandiettes with four points apiece while a trio of Sandiettes – Tatiyana Bowie, Chipman and Jones – all had two. Harris converted one of two from the line to round out the third quarter scoring for Grapeland. 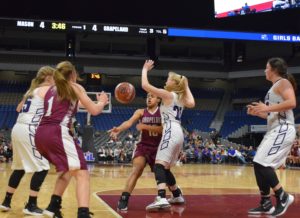 uarter points. Armstrong knocked down a three while Hanscheck and Presley Anastas had two apiece.

With eight minutes remaining between a sad drive back home and a trip to the championship game, the Sandiettes opted for the latter. Chipman put the team on her back and willed them through the quarter.

She dropped in eight and had a rebound, an assist, a block and a steal in the final period of play. Jones came off the bench to add four points. R. Bowie and Woods dropped in two apiece while Harris and T. Bowie both added one to help close out the game by a final score of 61-54. 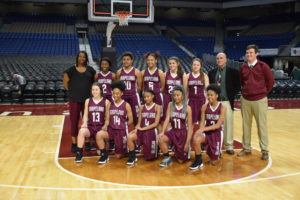 ry as they might, the Cowgirls could never close the gap on the Sandiettes. Cano netted eight, Magnus had four and three other Mason players – Anastas, Hanscheck and Tessa Guice – all had two to round out the Mason scoring.

On the game, the Cowgirls were led by Ruby Magnus with 22 points and 15 rebounds. McKenzie Cano poured in 12 and had nine boards. Jesse Armstrong added eight points, Courtney Hanscheck had six, Presley Anastas had four and Tessa Guice had two points.

The Sandiettes were led by Hannah Chipman with 18 points, five rebounds, four assists, one block and seven steals. Teira Jones netted 14 points, five boards, one assist and four steals. Ragan Bowie also had 14 points. KeKe Harris and Kenya Woods both dropped in six while Tatiyana Bowie chipped in three to close out the Grapeland point production.