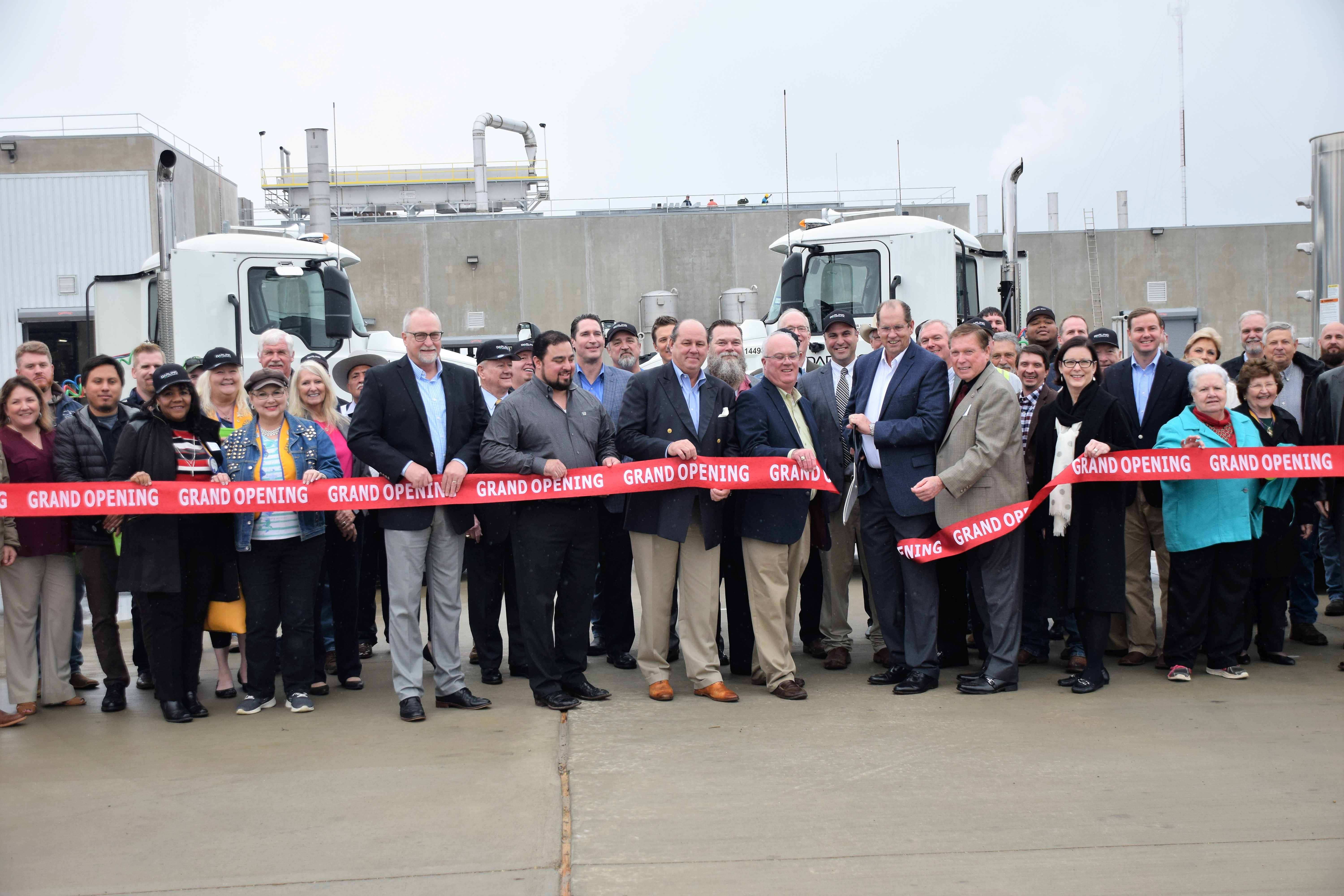 GRAPELAND – It was as if God himself smiled down upon Grapeland, Wednesday morning, Dec. 19. The day started with gray, overcast skies and drizzling rain. Shortly before 10 a.m., however, the rain spigot was shut off and a hint of sunshine could be seen through the clouds just as the Darling Ingredients ribbon cutting ceremony got underway.

A little over a year had passed since the groundbreaking of the Darling facility – located on the eastern edge of the Grapeland city limits – and on Wednesday, people from far and wide came to see the nearly finished product.

Grapeland Mayor Balis Dailey opened the ceremony and welcomed those in attendance. The mayor said at the groundbreaking, a prayer was led by Grapeland ISD Superintendent Don Jackson and to open the ribbon cutting ceremony, the superintendent was once again asked to give an invocation.

Following the prayer, Dailey introduced several elected officials and their representatives. Staff members from US Sen. John Cornyn’s office were present along with staffers from US Rep. Kevin Brady’s office.

As he continued, the mayor read a statement from Rep. Brady.

“I congratulate you on the grand opening of your new facility in Grapeland, Texas. Your commitment to entrepreneurship, transparency, the integrity and displayed enthusiasm leads us to wish you and your employees the and for the place they will call home. Once again, congratulations and thank you for contributing to the community of Grapeland,” Dailey read.

Continuing with the introductions, the mayor introduced State Representative Trent Ashby and State Senator Robert Nichols, who was unable to attend. Lonnie Hunt, Executive Director of DETCOG was also introduced along with several other local officials.

Dailey singled out C.L. McGill – president of the Grapeland Economic Development Corporation – for recognition along with GEDC member Brandon Bridges for helping to spearhead the efforts to bring the company to Grapeland. Former Houston County Judge Erin Ford was also lauded by the mayor for his assistance in helping to forge the initial relationship between Houston County and Darling.

The mayor also thanked the landowners – Dennis Brunson and Dr. Ed Cutshaw – who sold their property in order to make the facility happen.

Following the introductions and appreciation bestowed upon those who helped get the project off the ground and to its current state of readiness, Dailey introduced Rick Elrod, Executive Vice President – Darling Ingredients USA.

“I’ve been in this business for 35 years and I’ve done numerous projects for my previous company. It is a pleasure to work for Darling Ingredients today,” the VP said to the crowd, estimated at over attendees.

Elrod said he had been impressed with Grapeland ever since the groundbreaking ceremony in November of 2017.

“It was so well done and over-the-top, you can’t imagine how great that was. When Brandon Bridges and the mayor came to us and said ‘Let’s do a ribbon cutting,’ that was a first for me,” he said.

Before continuing with his remarks, Elrod presented the mayor with an encased hat, featuring the signatures of all Darling executives present at the groundbreaking.

Picking back up, Elrod introduced several of the executive team members with the corporation who would be responsible for the success of the Grapeland plant.

“I can’t really start this process without saying this was a three-year achievement for our company and for me. I wanted to say a special thank you to Judge Ford for reaching out his hand. I had lunch with him in the backwoods of Crockett, Texas three years ago,” Elrod explained.

He also extended his gratitude to the Grapeland Mayor and to Bridges for their help with the project before he said it was a big day for the facility.

“Today, is the first day we turned the gas valve on. When we turn the gas valve on, it sends gas to our boilers so we have a boiler running in the plant for the first time today. We are about three or four weeks from where we need to be. Probably sometime in the middle of February – and we feel like after the first quarter of 2019, it will be business as usual. Our management team will be in place,” Elrod said.

After Elrod concluded, he turned the floor over to Mike Hudlow, the Senior VP of Engineering and Construction for Darling.

Hudlow thanked the contractors, project engineers, subcontractors, electricians, drafters and all the people involved in the construction of the plant – both inside and out. He also expressed his thanks to local businesses, such as:  Grapeland Farm and Ranch; Darsey’s Furniture; Chapman’s Hardware; and Brookshire Brothers in Grapeland.

For more with both Elrod and Hudlow, please see the Thursday, Dec. 27 edition of The Messenger or check back online.

Once Hudlow had concluded, he invited Darling Ingredients CEO Randall Stuewe to say a few words.

As he began, the CEO said he grew up in rural Kansas and added that Grapeland felt more like home than most people would know. 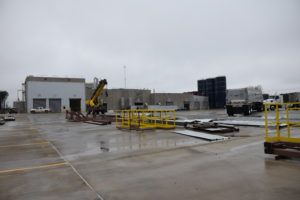 Next, the CEO gave a brief history of the company and said it had been around for 136 years. Stuewe said it dated back to 1882 with Swift Meat Packing.

He explained the Swift family wanted to run the slaughterhouses while Ira Darling said he would take what was not used for human consumption. Initially, Stuewe said, in the 1880s, up to half a slaughtered cow would be considered inedible and the waste products were used for various items like soap.

Eventually, the process morphed into the production of fat and fertilizer because of nitrogen levels. 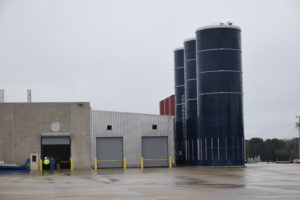 As the population of the country increased and the slaughterhouses and meat packing industries expanded, there were more animal byproducts which Darling began to turn into feed, fertilizer and fuels.

“We basically take slaughtered animal byproducts and create sustainable ingredients for food, feed and fuel. That’s what we do for a living,” Stuewe said.

Continuing, he said he believed there 130 plants in North America, 68 in Europe, 13 in Asia, two in South America and one in Australia.

“Essentially, what we are trying to do is become a part of the communities around the world who produce meat,” he said. 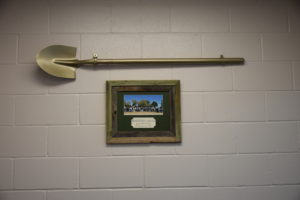 “What we do out here, sometimes isn’t real glamorous. I’ve always found – at times – it’s hard to tell people what I do. I have it polished, now. When I was introduced by my daughter, who’s in sixth grade, she said ‘My dad is a used cow dealer,’” he said with a laugh.

Changing gears somewhat, Stuewe said Darling’s commitment was to the health and safety of humans, animals, industries and the planet as a whole which tied in firmly with the company’s core values of entrepreneurship, transparency and integrity. He added these values were the foundation for all of our activities, setting our path as we develop and produce sustainable solutions for our world.

“Today is very, very important to me. I surprised Rick when I called and told him I was coming. He said but wait, ‘This is my show,’” he chuckled. 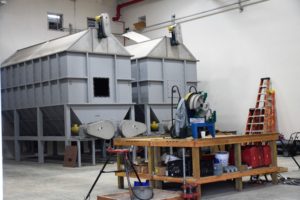 Stuewe stressed it was Elrod’s show and he was originally scheduled to be in China with the management team there, but because of world tensions, he opted for Grapeland instead.

“It’s a real world out there. It’s a fluid world. We’re part of it and we get to see it but at the end of the day I was thinking Changchun, China or Grapeland, Texas. I choose Grapeland,” he concluded.

After the introduction of Sam Trevino as the Grapeland plant’s GM, Trevino introduced the team assembled to run the Grapeland facility.

Next, several mementos of the grand opening/ribbon cutting were distributed and a catered meal from Shep’s BBQ in Palestine was served.