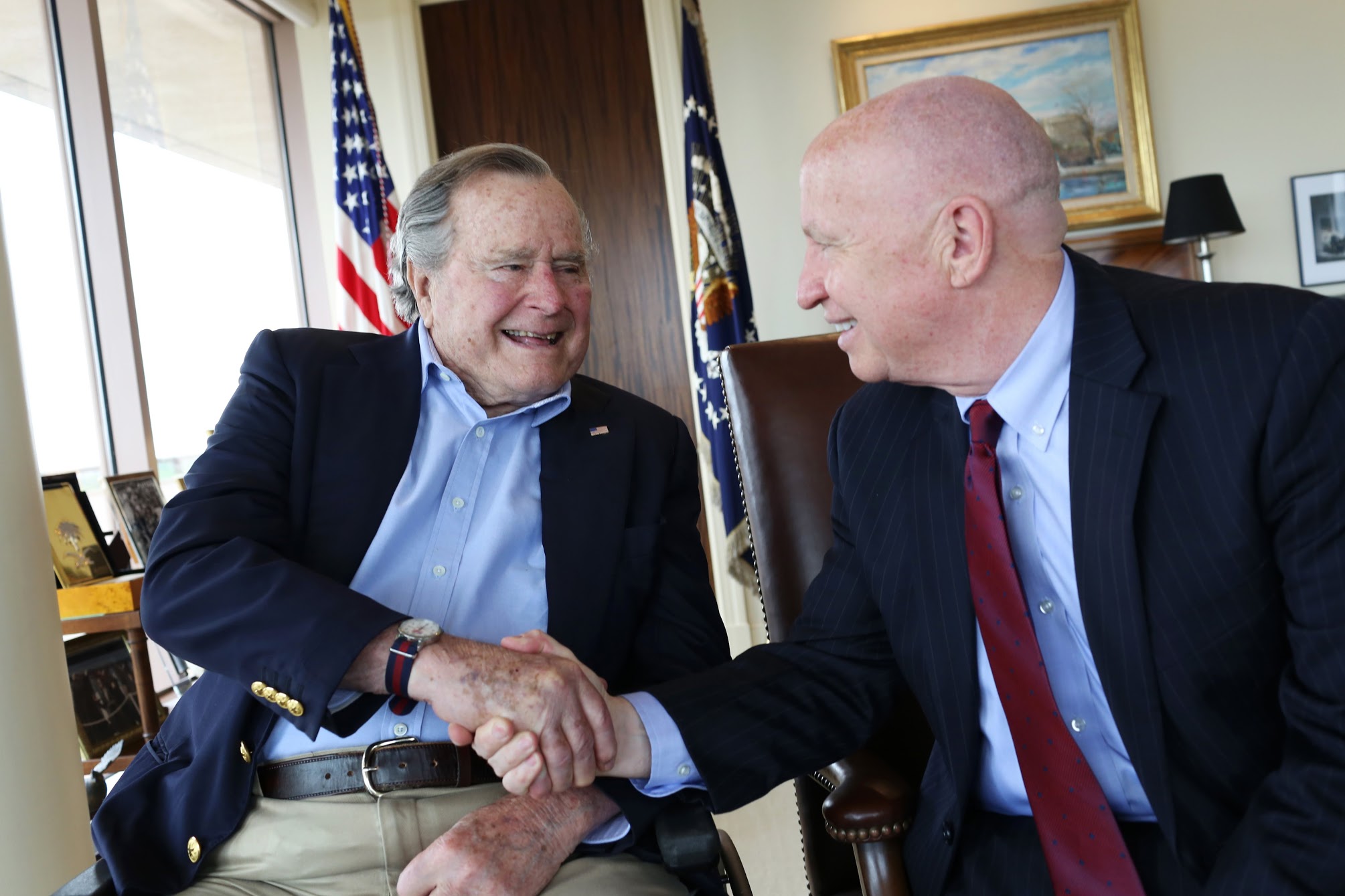 WASHINGTON, D.C. – As former President George H.W. Bush lies in state at the U.S. Capitol, Congressman Kevin Brady took time on Tuesday, Dec. 4 to reflect on the life and legacy of a true American patriot.

“I am standing at my window in my Capitol office, just off the House floor and just off the Rotunda where President Bush is lying in state. Looking out the window – as far as I can see – there are Americans standing in line to be admitted to the Capitol in order to pay their respects,” the congressman said during a mid-afternoon conference call.

Brady indicated while the mood in the nation’s capital is somber it is also one of celebration because of the depth and breadth of service to the nation put forth by the 41st President of the United States.

“He was a courageous war hero, he was a key member of the Ways and Means Committee while he was in Congress. He was twice an ambassador. He was Director of the CIA. He was Vice-President and finally President of the United Sates. That is just a remarkable – historical – level of service – to America. But, I still think his favorite title was that of husband to his beloved wife, Barbara,” Brady said.

The Ways and Means Committee Chairman said it was his believe that Bush’s greatest accomplishment was “… raising children who served their nation with dedication and patriotism. I join in the 8th Congressional District and I think our country and our state have lost a great man of honor who leaves a legacy of love and service to his nation and to his family.”

As Brady continued, he discussed his relationship with George H.W. Bush. He said he held the congressional seat on the Ways and Means Committee previously occupied by President Bush.

“Following him, was Bill Archer of Houston who later became the second Chairman of the Ways and Means Committee from Texas. My legacy on the committee begins with President Bush and continues with Chairman Archer and then myself. I am truly blessed to be a part of this committee which has achieved so much,” he said.

Brady added President Bush had been very supportive of him during his first campaign for Congress and after he began serving in the House.

“There was always an open door to talk about issues dealing in tax, trade, healthcare, welfare along with social security and Medicare. I could lean on him for advice. I had the pleasure – because I represented College Station – to be the congressman when his presidential library was opened. I worked closely with the foundation in the eight years I represented A&M,” Brady said.

Not only was the library itself impressive, but it also created a legacy in the College Station area by opening doors by bringing foreign leaders to the Brazos Valley, as well as people from the smallest towns in Texas.

“The legacy of the George H.W. Bush Library will last for ages,” Brady said.

“One of my favorite moments,” Brady recalled, “was after I became Chairman of the Ways and Means Committee, President Bush’s office reached out and said the president would like for me to come down to his office in Houston and visit.”

He said before he went, his staff urged him to take a pair of crazy-looking socks as a gift because President Bush “… loved them and wore them. I decided instead to bring one of the specially made Ways and Means ties I had created. I brought that down and the president was thrilled with the tie. It was Barbara, However, when I presented him the tie said, ‘Thank God! No more socks, please!’ Apparently, President Bush had been inundated with socks.”

As he began to wrap up the conference call, Brady commented on every Memorial Day and Veterans Day, he liked to use a quote from President Bush that stated, “Let future generations understand the burden and the blessings of freedom. Let them say we stood where duty required us to stand.”