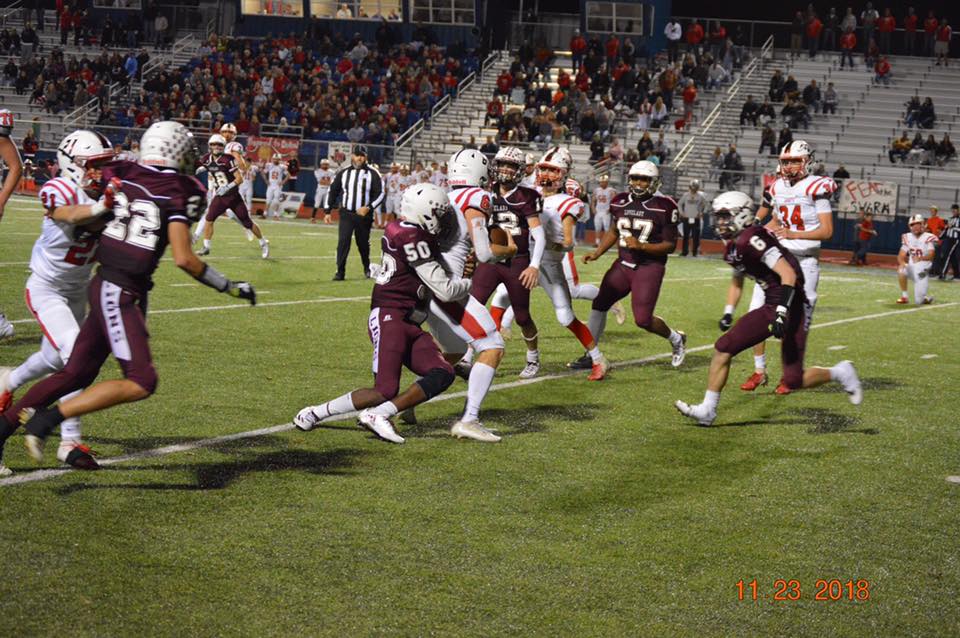 EMORY – The Lovelady Lions advanced to the Area Championship after their 69-19 win over the Dawson Bulldogs. Waiting for the Lions in the Area Round were the defending state champions in Class 2A DII football, the Muenster Hornets.

The Lions knew what they were up against coming into the game and fought hard throughout. Lovelady led the game at halftime by a score of 22-18 and for a very long time, it looked as if the Lions just might pull off the upset.

Unfortunately, it was not meant to be as the Hornets won the battle to advance in the playoffs by a final score of 32-22.

The Hornets jumped out to an early 11-0 lead only to see the Lions cut the score to 11-6 by the end of the first 12 minutes of play.

Lovelady took the lead shortly after the second quarter got underway with two-yard plunge by Timothy Johnson. The two-point conversion was good and made the score 14-11 with just over eight minutes left in the half. 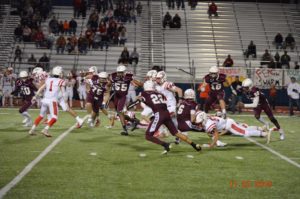 Muenster regained the lead after recovering a muffed punt by Lovelady at their own 29. From there, the Hornets marched the rest of the way to pay dirt. The extra point was good and gave the Hornets an 18-14 lead.

On the ensuing possession, Lovelady showed they were not going to go away. The Lions roared down the field and with 3:49 remaining in the half, Logan Lowery connected with his receiver for a 26-yard scoring strike. The two-point conversion was good which made the score 22-18.

Muenster had one last scoring opportunity after the Hornets blocked a punt and took over possession at the Lovelady 29 with 41 seconds left in the half.

The Lions defense stiffened, however, and the two teams went to their respective locker rooms when the halftime horn sounded with the Lions ahead by a score of 22-18.

After the break, Lovelady took possession of the ball at their own 16, but couldn’t go anywhere. The Lions were forced to punt and Muenster took over at the Lion 43. Six plays later, the Hornets scored on a seven-yard sweep to retake the lead. The extra point was good and made the score 25-22, Muenster.

The score remained the same as the third quarter ticked down. The Hornets had the ball and were driving for a score. Fortunately for the Lions, a fumble gave the ball back to Lovelady at their own 25.

A sack by Muenster pushed the ball back to the Lovelady five and set up a second and 30 as time expired in the third.

As the final quarter began, a facemask penalty gave the Lions new life and an automatic first down. Disaster stuck on the next play, however, as the Lovelady ball carrier was stripped of the rock. A Hornets’ player picked it up and returned the fumble for a TD. The PAT made the score 32-22 with just over 10 minutes remaining in the game.

The Lions kept clawing back. They moved down to the Muenster 23 and faced a fourth and three situation. The Hornets held the Lions in check and took possession, only to give the ball right back to the Lions on a fumble at the 26.

This time, the Lions moved down to the two-yard line but a penalty pushed them back to the seven. Try as they might, Lovelady could simply not put the ball in the end zone and turned it over on downs. From there, the Hornets were able to run out the clock and hold on for the 32-22 win.

The loss ends the Lions’ season with a record of 9-3. Muenster will now face the Evadale Rebels in the Regional Semifinals. This is the same Evadale team who lost to Grapeland by a score of 41-6 and to Lovelady by a score of 40-6, during the regular season.