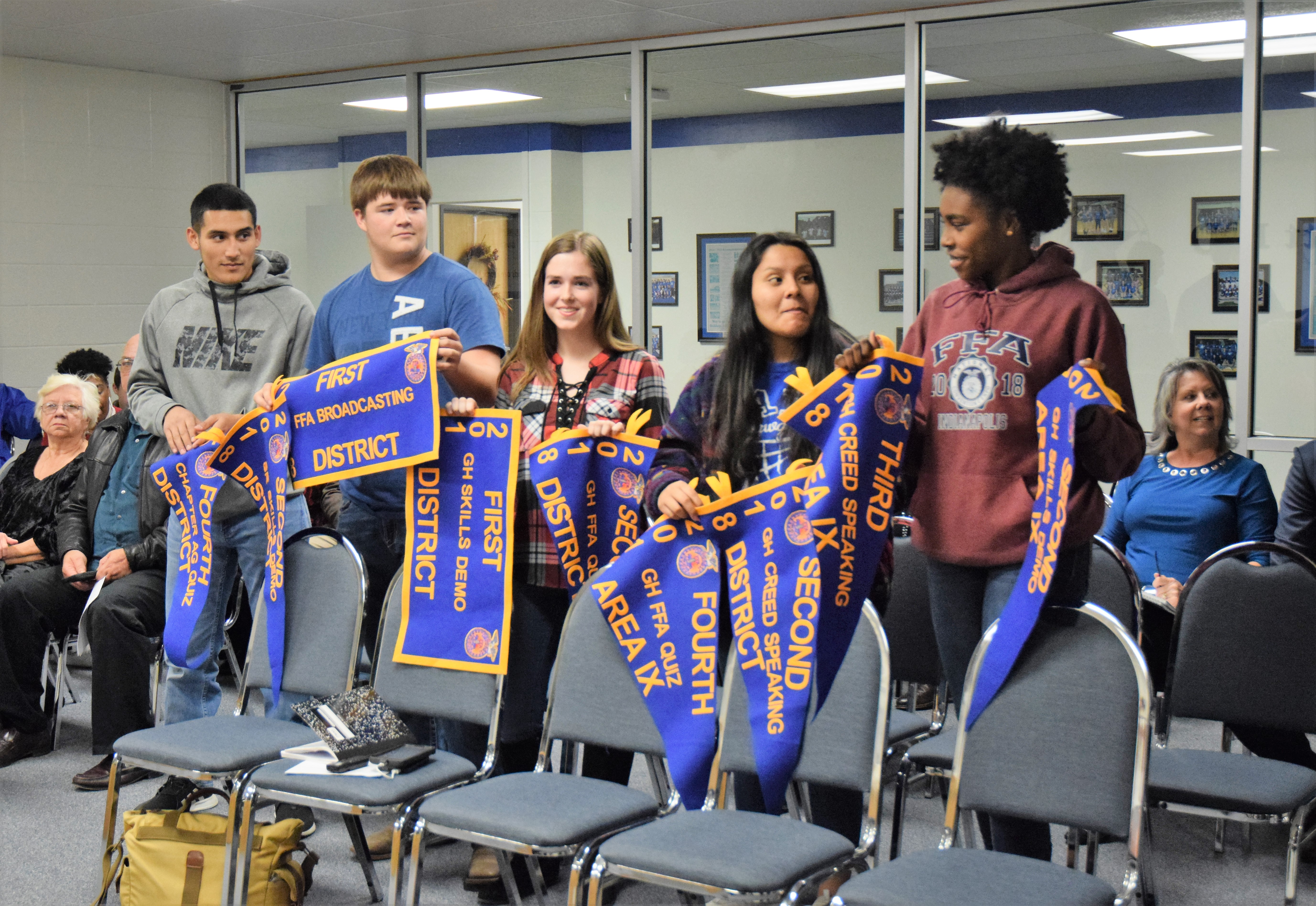 CROCKETT – The Crockett FFA was recognized for its recent accomplishments during a Crockett ISD Board of Trustees meeting held on Monday, Nov. 26.

After the meeting was called to order by Board Secretary Karen Johnson, CISD Superintendent Terry Myers asked the FFA members in attendance – along with the FFA advisors David Christie, Richard Smith and Whitney Stretcher – to come forward.

“Thank y’all,” Smith said. “I want to start out with kids who competed at the National Convention. Elean (Villanueva) was third high individual in the nation (in the Sr. Quiz competition). Sha’Bess (Johnson) was also there and competed. I believe we got sixth place in the nation. We can knock on the door but we just can’t get past Grapeland, yet.”

Smith continued, “A couple of weeks ago, we went to the district convention in Madisonville. We carried 33 kids, which is a record number for us. We had eight teams and five advanced to area. I’ve been here five years and we haven’t done that.”

Several of the FFA members held up banners they won at the district level. 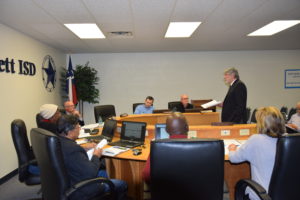 “This is what we compete for – the banners. There are 26 schools in our district. We don’t get to break off into Class 1A, 2A or 3A. We had a really good day that day. At the area competition, we brought five teams and the Greenhand team with Meredith Tuggle over there placed second. The top two teams advance, so they will be competing at state,” Smith said.

Among the FFA members in attendance at the meeting were: Elean Villanueva; Weston Reeves; Meredith Tuggle; Yazaret Marcelo-Ramirez; and Sha’Bess Johnson.

Following the FFA recognition and the approval of consent agenda items, the superintendent introduced Christina Strban who heads up the Project Graduation committee.

“She is the young lady responsible for organizing Project Graduation this year. We have an overall agenda for you (trustees) in your packets, which I’m sure you’ve read. She (Strban) laid that out for you. She is in the process of recruiting parents, community members and some of our staff to help her with that. I believe it will go from about 11 p.m. until 6 a.m. It is a really worthwhile program,” Myers said.

Once the Project Graduation update was complete, the superintendent introduced John Manuel and Kathy Harris with the law firm of Linebarger, Goggan, Blair and Sampson, LLP. Attorney Ben Kissee was also present.

Manuel explained how the firm went about collecting delinquent taxes.

“The initial letters we send out are just to get people’s attention and remind them of their obligation. AS time goes on, the letters get a little more severe. At one point, we finally send out a NOIS letter. That stands for notice of intent to sue,” Manuel said.

As he continued, he explained if the letters did not result in tax collections, suits were filed.

“Last year, we filed 16 on real property in Crockett on 23 different accounts. After you file the lawsuit, many different things can occur,” he explained.

Following the delinquent tax presentation, the 2017-2018 Financial Audit Reports were approved by the CISD Board. The district received an unmodified opinion, the highest possible rating, on the audit.