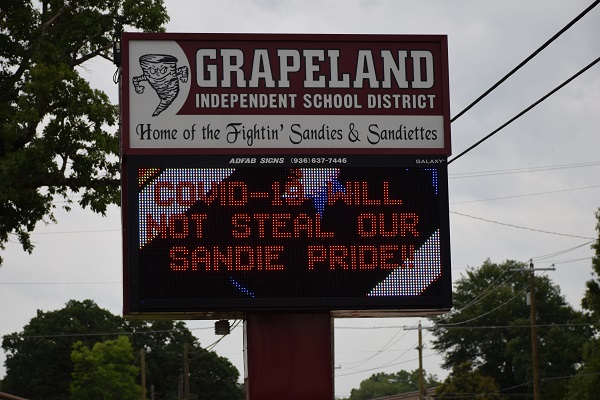 GRAPELAND – After a brief hiatus, a former Grapeland ISD Board of Trustees president has returned to the school board.

Eddie Childress has agreed to take the place of GISD Board Member Brad Spisak who resigned during the Monday, May 18 meeting. Spisak is stepping down from his board position because his wife Channin Spisak has been offered a contract to teach Jr. High science. Board policy dictates a school board member may not serve on the board at the time an immediate family member is hired.

“I think (GISD Superintendent) Don (Jackson) has done a great job,” the outgoing board member said. “It has been a real joy. The staff members and people who want to come to Grapeland, they come here because your leadership is valued.”

Childress, who is running for the Grapeland City Council, said, “The reason I am able to do this is because COVID-19 has delayed the city election until November. In November, I’ll have to make a decision because you can’t serve on two boards in the same community.”

Following the swearing-in of Childress, the board was slated to reorganize. There were no changes, however, for the 2020-2021 officers. As a result, James Martin will return as president, Melissa Cobb will return as vice-president and Kendra Huff will return as secretary.

As the meeting continued, a discussion was held about increasing tuition for children in Pre-K 3 and 4. The rate was eventually raised from $125 to $175 per month. The tuition is for children who don’t qualify for free public education within the district.

Prior to the swearing-in ceremonies, a lengthy discussion about graduation was held. Several parents were in attendance at the Monday night meeting to voice their opinions about holding a “normal” commencement ceremony.

After the parents had expressed their concerns in the public forum portion of the meeting, board members and administrators were able to respond because the matter was specifically placed on the agenda.

It was explained administrators had met with the Senior Class officers to let them provide some insight as to what they wanted to do. It was also indicated the senior officers chose to have individual graduations.

During an April meeting of the GISD board, GHS Principal Katie Doughty reported each senior would be allowed to pick one of six locations. These were: the front of the high school; basketball gym; front of the Ag building; football field; baseball field; or the softball field.

Board President James Martin added it was possible for the parents to organize a “traditional” graduation ceremony in addition to the individual ceremonies. Martin added the school could provide the physical resources and still not put the safety of employees at risk.

Parents met with district representatives on Thursday, May 21 to discuss the matter but no official word has been given as to what might happen as far as a parent-led graduation.

The individual commencement ceremonies began on Tuesday, May 19 at the football field.

In other matters brought before the GISD Board: