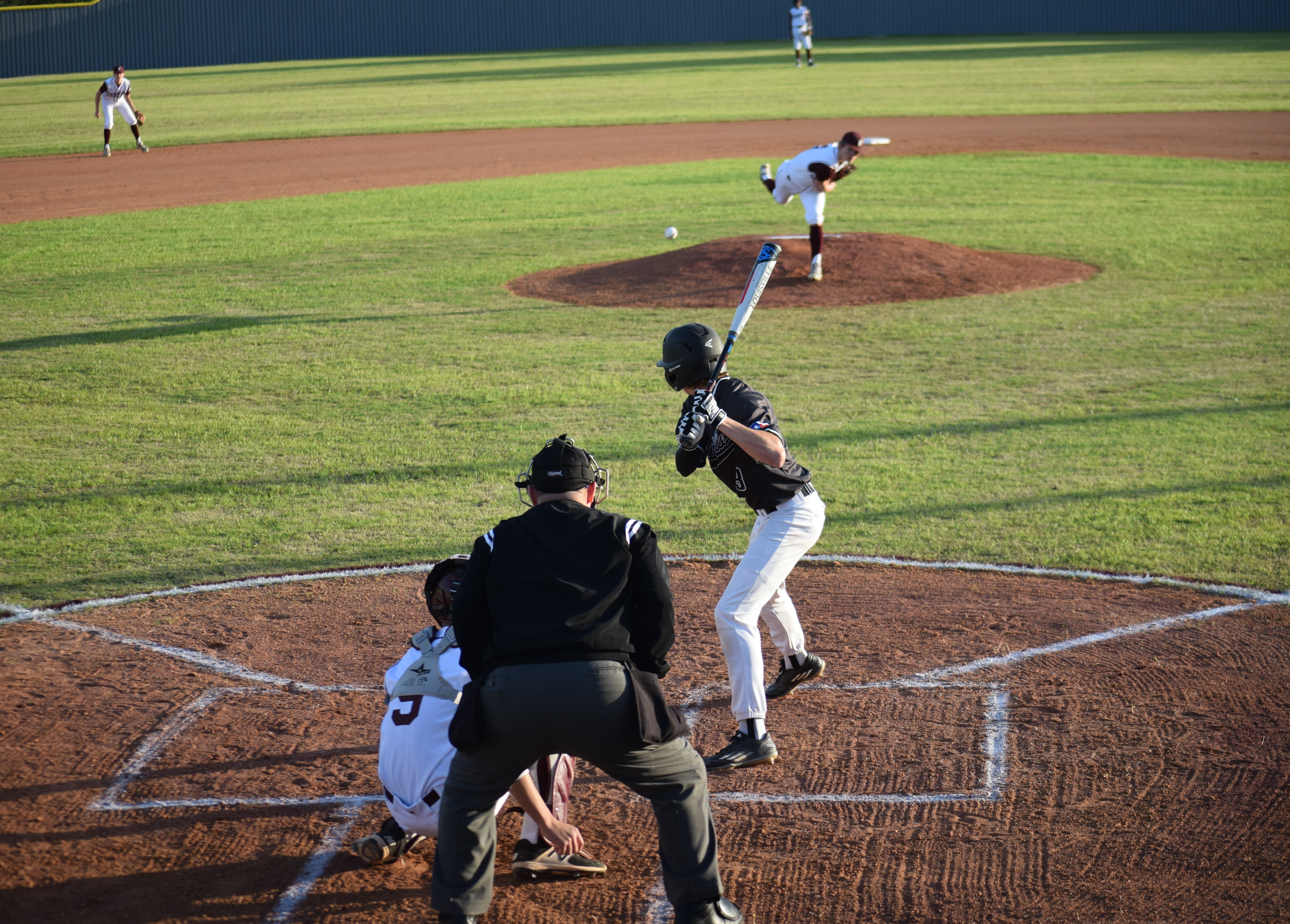 GRAPELAND – For the majority of the game on Wednesday evening, April 4, the Grapeland Sandies looked flat. The Centerville Tigers used this to their advantage and jumped out to a 4-0 lead through four and a half innings of play.

Whether it was the luster of their new ballpark or something completely different, a fire was lit under the Sandies in the bottom of the fifth inning as they cut the Tigers lead in half at 4-2.

That fire got even hotter in the bottom of the sixth as Grapeland crossed the plate five times to take a 7-4 lead and then held on in the top of the seventh to remain unbeaten at the newly opened Sandie Field.

Josh Ackley was on the mound to start the game for Grapeland and found himself in hot water early on. He walked the first two batters he faced – Hunter Free and Mikey Rojas – and then gave up an infield single to Cade Beshears to load the bases.

While Ackley worked his way into a first inning jam, he also worked his way out of it. He Caught Colton Adams swinging at strike three and then coaxed Dillon Brent to hit a comebacker to the mound. Ackley fielded the ball and threw home for a 1-2 force at the plate.

Tanner Smoldas helped Ackley out when he lofted a pop up to Austin Driskell at short for the third out to end the top half of the inning.

Hunter Free was on the bump for Centerville and on three pitches he recorded two outs as Driskell lined out to third and Dylan Duhon popped out to center. Ackley was up next in the batting order and was caught looking at strike three to end the inning.

After flirting with disaster in the top of the first, Ackley gave up a pair of runs in the top of the second. He walked John Vardeman on four consecutive pitches but turned around and struck out Bryce Williams.

Dillon Denman was up next and hit a rocket to second that was mishandled. On the play, Vardeman moved to third and Denman slid safely into second.

A wild pitch allowed Vardeman to scamper home with the game’s first run. Free followed in the batting order and struck out but Rojas delivered a single up the middle to drive in Denman from third and make the score 2-0.

After Ackley struck out Beshears to end the Centerville at-bat, the Sandies came in to hit but met with limited success. Free struck out Ethan Peterson for the first out and then walked Blake Howard. Cameron Navarette was up next and grounded into an unassisted force at first that moved Howard to second.

That was as far as the Grapeland first baseman would get, however, as Cooper Sheridan struck out to end the inning with the Tigers still ahead by a score of 2-0.

Centerville tacked on another run in the third inning after Adams led off with a single to center. Ackley got Brent to ground into a 4-3 fielder’s choice but two pitches later, Adams moved to third on a passed ball and crossed the dish to make the score 3-0 when Smoldas singled past short.

Ackley kept his composure, however, as he forced the next two batters back to the dugout to end the Centerville at-bat.

Free continued his mastery of the Sandie hitters in the bottom of the inning, but finally gave up a hit when Driskell hit a shot past the bag at third.

The Sandies were still unable to push a run across the plate and when the Tigers added another run in the top of the fourth, it seemed as if the Sandies’ four-game winning streak was about to end.

At the start of the fifth inning, Driskell took over in relief of Ackley while Ackley moved to short. The new Grapeland pitcher walked the first batter he faced but then rattled off three consecutive strikeouts to retire the Centerville side.

The three Ks seemed to energize the Sandies’ dugout. Camarron MIxon hit into a 5-3 force to lead off the inning, but BJ Lamb and Driskell walked. Duhon struck out for the second out of the inning and it appeared as if the Sandies might strand their baserunners.

Ackley was up next and roped a Free pitch past short which drove in Lamb as well as Driskell and cut the Tigers lead in half.

Ackley took second on the play and moved to third on a passed ball. Unfortunately, he was left at the hot corner when Peterson struck out.

As the sixth inning got underway, Driskell got in a bit of a jam. He gave up a lead-off double to Free, but then got Rojas to fly out to right. On the play, Free tagged up and moved to third.

Beshears was up next and drew a four pitch walk. Adams followed in the order and tapped back to the mound. Driskell checked the runner at third and then fired to Howard at first for the second out.

Brent was up next and worked a full count out of Driskell before he swung and missed to bring the Centerville at-bat to an end.

That lost opportunity would come back to haunt the Tigers as Grapeland plated five runs in the bottom of the inning to take a 7-4 lead.

Howard led off with a great at-bat as he battled Free for 11 pitches before he singled up the middle.

Case Boyd struck out and Sheridan hit into a fielder’s choice at second. Then – with two outs – the Sandies went to work.

MIxon reached on a dropped third strike while Lamb was hit by a pitch. With the bases loaded, the Tigers made a pitching change as Brent relieved Sheridan.

The move backfired for Centerville as Brent walked Driskell to force in Sheridan from third. He then gave up a single to Duhon that drove in MIxon and tied the game at four.

With the game now tied, Brent proceeded to walk Ackley to drive in Lamb and then walked Peterson to push Driskell across the plate. That was all she wrote for Brent as he was yanked for Rojas.

Unfortunately for Centerville, the walks didn’t stop when Rojas took the mound. He walked Howard on four straight pitches and what was once a two-run lead with two outs was now a three-run deficit as Duhon trotted home from third.

Rojas was finally able to get Boyd to pop up to end the inning but the damage was done as the Sandies now led, 7-4.

Driskell went back to the mound in the top of the seventh and retired the Tigers in order to give Grapeland the 7-4 win.

Driskell picked up the win in relief. He pitched three innings, gave up one hit, struck out five and walked three.

Free took the loss with 5.2 innings of work. He gave up five runs on three hits, struck out 10, walked three and hit three batters. He was also 2-3 at the plate with one run, two walks and a strikeout.

Ackley was 1-3 at the plate with three RBI, one walk and two Ks.