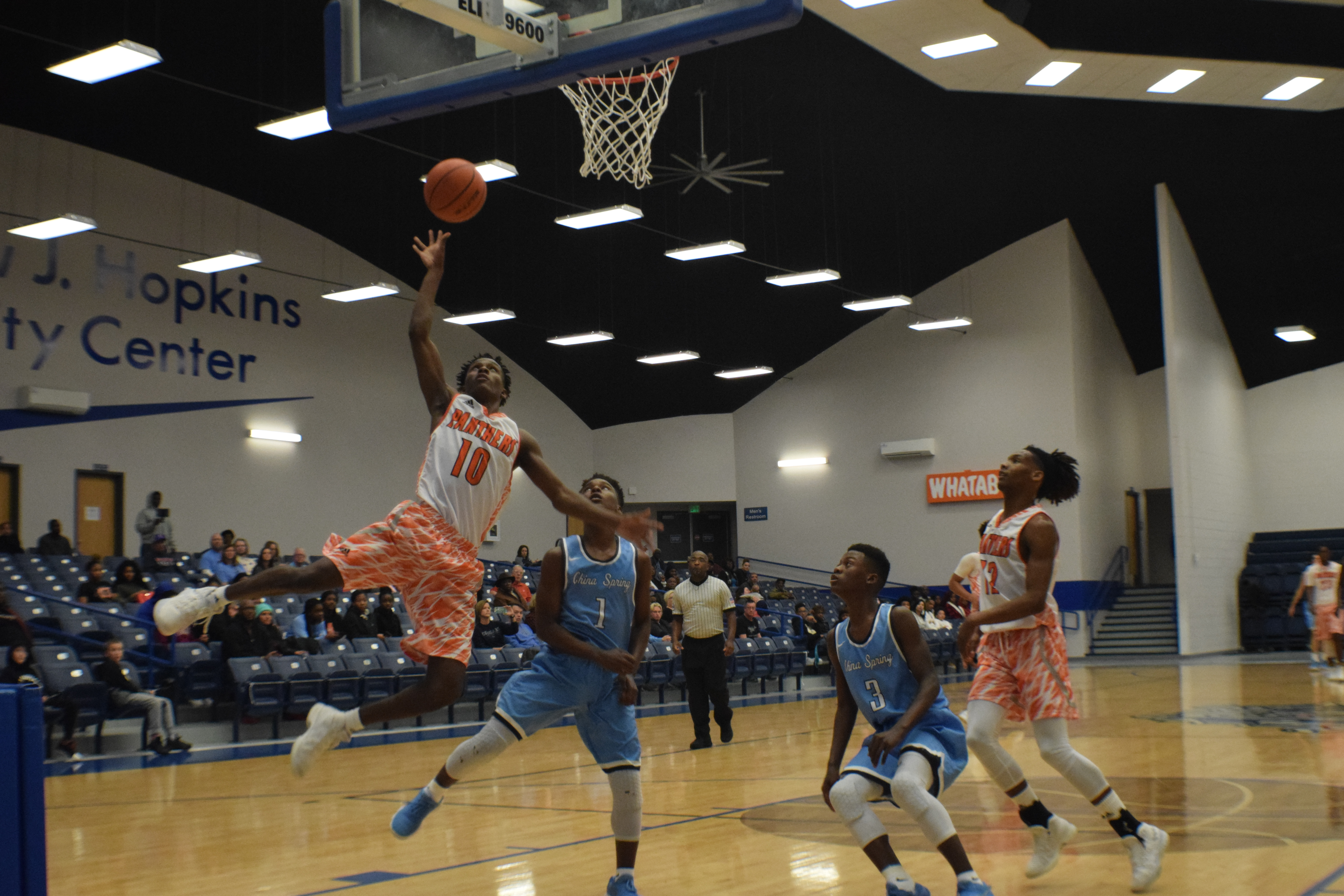 CROCKETT and GRAPELAND – The Houston County Holiday Tournament concluded on Saturday, Dec. 30 with the Westwood Panthers holding the Championship trophy aloft after they defeated the Chins Spring Cougars by a final of 58-46.

“This is one of those tournaments that has a lot of great competition,” Westwood Head Basketball Coach Jacob Russ said. “The Wharton coach and I have run tournaments together and they’ve got a really good team. Grapeland is ranked, we’re ranked, Slocum is ranked and China Spring should be ranked in Class 4A.”

“The tournament itself ran great,” Russ continued. “Crockett and Grapeland both do a great job of putting this thing on. Coach Bryant and Coach Earp both do a great job. I’m happy more and more teams are coming to this and of course, I’m Happy we could win it.”

Russ explained losing to Diboll in pool play helped show his players the fundamentals still needed some fine tuning, but added “… Crockett did us a favor by beating Diboll.”

He said his team really came together as one when they played Palestine in the championship bracket semi-finals.

“All these guys are unbelievable and hopefully they can continue on into district play,” he added.

The Panthers’ opponents in the tourney finals were the China Spring Cougars. The Cougars had defeated the Fairfield Eagles, 49-41, and the Elkhart Elks 86-38, during pool play in Grapeland.

On Friday night, they took on the Sandies and stole a game Grapeland should have won. Speaking of the Sandies, Grapeland waltzed through pool play with a 2-0 record after they defeated Malakoff by a final score of 64-52.

In their second game of the tournament, Grapeland slipped by a tough Slocum Mustang team, 54-51, and into the championship bracket where the Cougars were waiting.

After their loss to China Spring, the Sandies seemed to run out of gas against the Palestine Wildcats during the second half of the consolation game. The shots would not go in, the focus was not there on free throws and the struggles morphed into several attitude issues shown by Grapeland.

As far as the Slocum Mustangs go, they showed they could play with the

big boys of the basketball world and after their performance in the Houston County Holiday Tournament, the Mustangs are still holding at #10 in Class 3A despite losing three of four games.

Slocum fell to the Class 3A Malakoff Tigers 71-62, after leading most of the game. They turned around on Friday and more than held their own to a ranked Grapeland team on its home court before losing 54-51.

On Saturday, they took on the neighboring Elkhart Elks and defeated the Class 3A school by a final score of 45-35. Later, the Mustangs took on Class 4A Diboll in the consolation game of the bronze bracket and very nearly won before falling 61-55.

Along with the Sandies, the Crockett Bulldogs co-hosted the tournament in the Andrew J. Hopkins Activity Center and saw some tremendous hoops action inside the dome.

The Dawgs first game was a nail-biter as Crockett came back from an early deficit before finally falling 67-60, to the Westwood Panthers.

Their next game saw the Dawgs pull off a minor upset as they defeated the Diboll Lumberjacks by a final of 47-40.

The win moved the Dawgs into the Silver Brackett against the Wharton Tigers. Again, the Dawgs were in a battle throughout before falling by a final score of 55-53.

The loss knocked Crockett into the Silver consolation game where they destroyed the Malakoff Tigers by a final of 52-35.