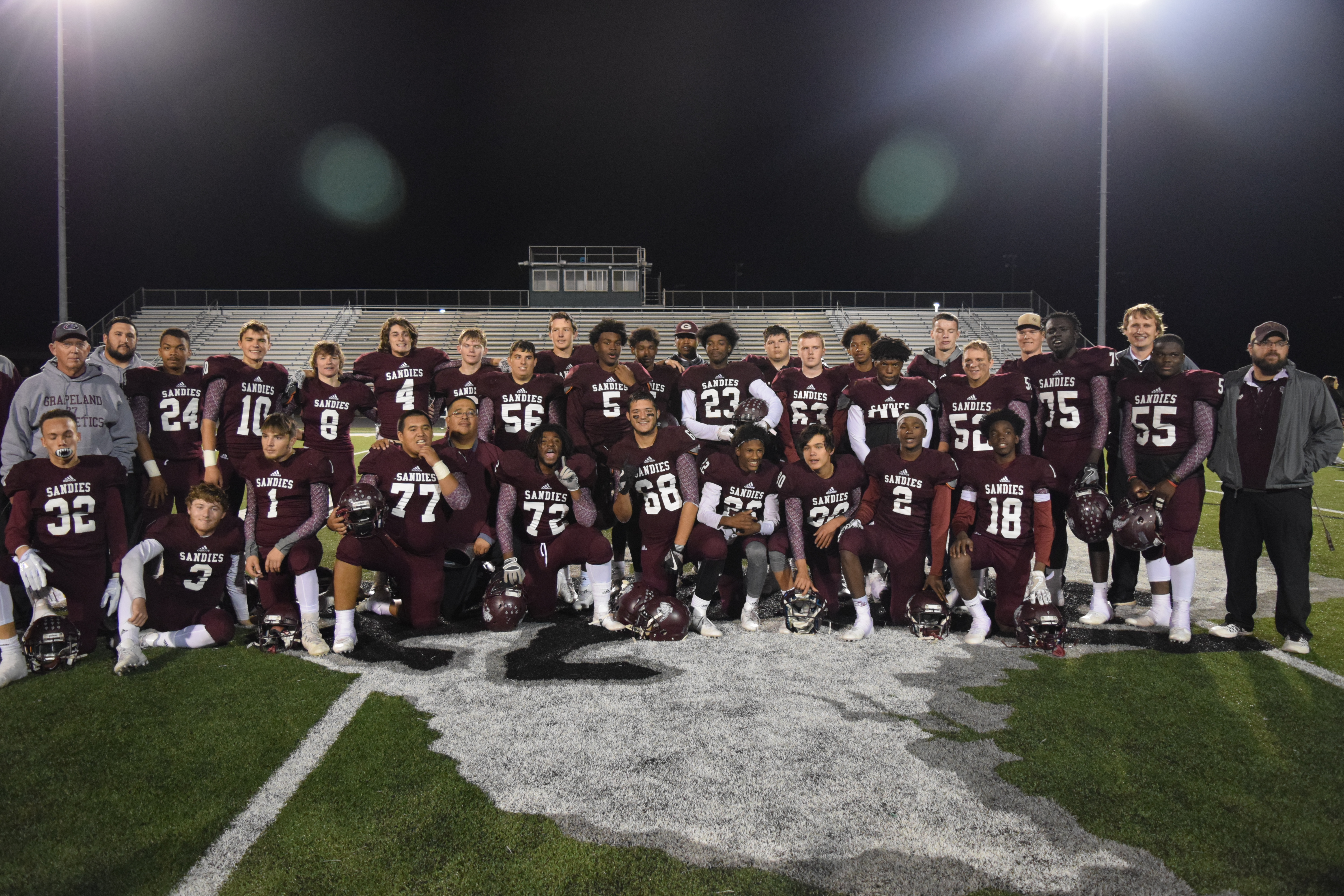 MABANK – Some teams take the opportunities given to them, while others seem to waste them away. Grapeland took every opportunity they had and ran with it. The Sandies forced five turnovers, two of which were converted into Brayden Cheatham touchdowns, on their way to a 49-34 win over the Cumby Trojans on Friday night. 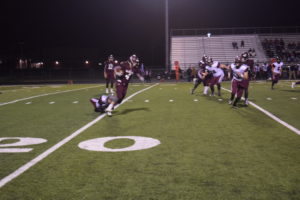 Cheatham wasn’t the only Sandie with a monster game, as senior running back Brannon Bedre ran for 145 yard and three scores on just 13 carries. Bedre continued to answer the call in the second half with two big touchdown runs to help hold off an explosive Trojan offense, and put the Sandies victory on ice.

Of Bedre’s performance, Sandies Coach Wayne Mahaffey didn’t have to say much other than, “Bedre ran the ball pretty well.”

The Trojans entered the game averaging north of 40 points a game this year, and were held to just 12 points through three quarters before a late flurry of touchdowns when the game was out of reach.

“The defense played pretty well. They [The defense] were a big part to us winning,” said Mahaffey of his defenses performance. 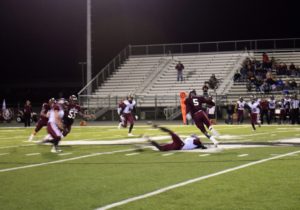 While the Sandies ran away late, it was a bumpy start for both teams. Cumby got a big 38-yard run from stud running back Tylan Brown. That would put the Trojans deep in Sandie territory, but the drive would eventually stall.

Facing a 3rd and 10, Cumby quarterback Cameron Scott would drop back to pass, only to be pressured and have that pass intercepted by Brayden Cheatham on the Sandies 10-yard line.

That momentum wouldn’t last as just three plays later, Frauenberger pressured in own end zone, would lob up a prayer, only to have it intercepted by Cumby’s Jose Villegas.

With an amazing scoring opportunity, the Trojans would literally fumble it away as Brown would cough up the ball on the Grapeland 1-yard line. Brown would eventually get that one back, scoring from five yards out in the second quarter to give Cumby a 6-0 lead.

That’s when the floodgates opened. Freshman B.J. Howard would take a broken screen play 47-yards up the middle for a touchdown to give Grapeland a 7-6 lead. Three plays later Grapeland would get their first defensive score of the night, as Cheatham picked up a Trojan fumble, and ran it back 55-yards for the touchdown.

Cumby looked to have answered when Brown went off the right edge for a 27-yard touchdown, but an  untimely penalty brought the ball back. That was one of eight penalties for 76 yards called on the Trojans, who were plagued with self-inflicted mistakes throughout the night. 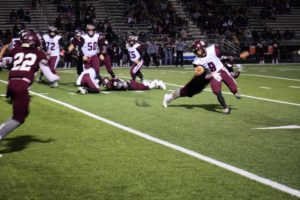 Cumby eventually turned the ball over on downs, only to see Grapeland march down the field on the arm of Frauenberger and legs of Bedre. Bedre would get the final say in the drive, punching the ball in from four-yards out to give Grapeland a 22-6 halftime lead. While the drive was impressive, it was the scramble by Dylan Duhon on the botched extra point, where Duhon dove just inside the left pylon for the two-point conversion, that drew the loudest cheers.

Trailing early, Cumby came out swinging to start the second half. A 62-yard run by Brown put the Trojans in scoring position. Four plays later it was Braden Coble punching the ball in from one-yard out to make the score 22-12.

Cumby would recover the ensuing onsides kick but was unable to do anything with the ball. In total, Cumby would control the ball for the first seven minutes of the second half. Once Grapeland got the ball, the Sandies made sure to make good use of their opportunity.

The first opportunity came when Frauenberger connected with Tyrin Wiley for a 71-yard touchdown strike to regain the Sandies momentum. Shortly after that, Bedre would take the ball 56-yards up the middle to give Grapeland a 35-12 lead going into the fourth quarter. 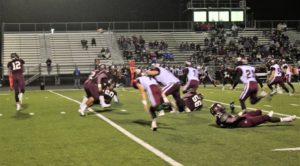 Cumby would tack on two more touchdowns over the final minutes, including a tipped hail Mary as time expired to reach the final score of 49-34.

The Sandies were extremely balanced offensively with 370 yards of total offense. The Sandies rushed for 186 yards with Bedre’s 145 taking up the bulk of the load. Frauenberger finished the night completing 10 of 17 passes for 184 yards with two touchdowns and one interception. Howard led the team with four catches for 67 yards and a touchdown. Wiley added two catches for 77 yards and the score. Bear Ackley chipped in three catches for 20 yards while converting five of six extra point opportunities.

Defensively it was Cheatham leading the way with two touchdowns on two fumble recoveries, and one interception. Tanner Keith forced one of those fumbles, and the Sandies also saw big games from Aaron Davis, James Coleman, and Keizion Ashford. 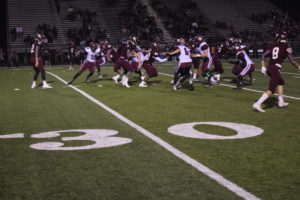 The win gives the Sandies their first Area Championship since 2007, when Grapeland defeated West Sabine 27-0. On clinching that Area Championship, Mahaffey said, “That’s nice, but that’s not the final objective. Our kids are really looking forward to playing Timpson again next week.”

Now the Sandies will get that chance to see the Timpson Bears again, this time for the Regional Round of the playoffs. The game will be held at Rusk Stadium on Friday, Dec. 1. Kickoff is scheduled for 7 p.m.

For a complete preview of the Sandies Regional showdown, check back in Thursday’s edition of The Messenger.