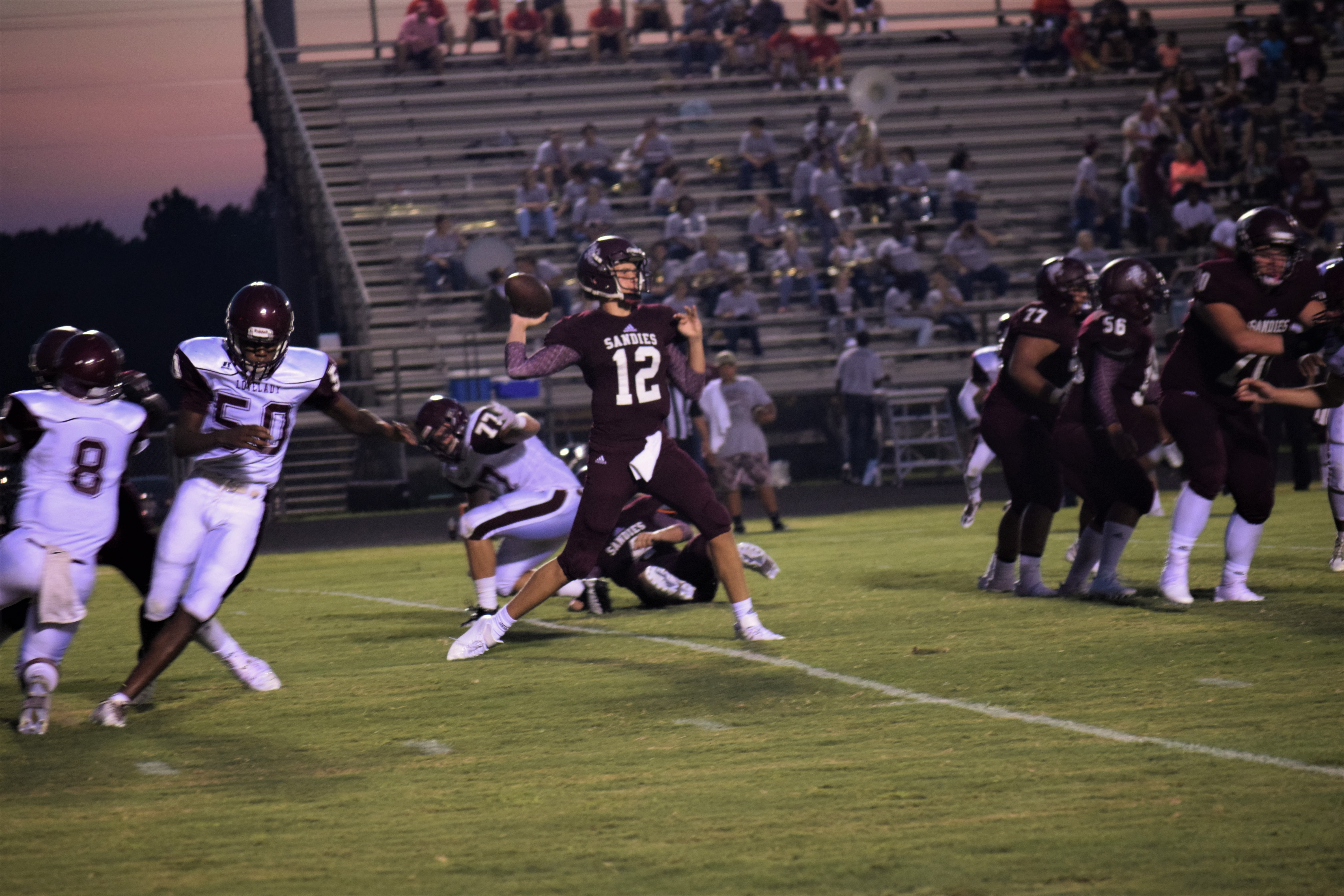 GRAPELAND – Now that’s the way to start a season! The Lovelady Lions trailed 20-14 when they got the ball back on a turnover in their own end of the field.

The Lions took possession, drove the length of the field and tied the game at 20 as Lovelady QB Colt Robinson connected with receiver Alex McKnight from 14 yards out. On the try for two, Robinson faked a handoff to running back Tim Johnson, tucked the ball and knifed his way into the end zone to give the Lions a 22-20 lead with 51 seconds remaining in the game. 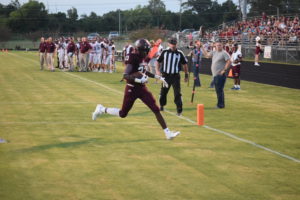 On the ensuing kickoff, Lovelady tried a squib kick which was pounced on by Grapeland’s Chaneller Francis at the Sandies’ 40 yard line. A quick hitter from Grapeland QB Rick Frauenberger to freshman receiver BJ Howard picked up nine, followed by an incompletion and a 10 yard reception by Josh “Bear” Ackley.

Two plays later, Frauenberger dropped back and was pressured by a ferocious Lions’ pass rush. He stepped up in the pocket not once, but twice, as wideout Tyrin Wiley managed to get behind the Lovelady “D.”

Frauenberger saw the opening he needed and threaded a 40-yard strike to Wiley who caught the ball at the three yard line, managed to stay in bounds and tapped his feet in the front left corner of the end zone with 18 seconds remaining for the game-winning score.

The Lions had one last chance, but a costly fumble by Robinson gave the ball back to Grapeland and allowed the Sandies to run out the clock for the 26-22 season opening victory.

While the game turned out the way the home team fans wanted, it was a game that almost didn’t happen. The Sandies were scheduled to play the Kountze Lions but because of damage from Hurricane Harvey, Kountze was unable to practice this week and had to cancel. 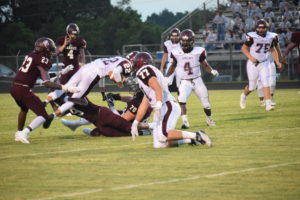 That left the Sandies with an unscheduled Week One bye. Their Houston County rivals to the south – the Lovelady Lions – had a scheduled bye on Friday, but because of the hurricane, the Lions were unable to get their second scrimmage of the year in against Normangee.

Once it was determined Harvey was no longer a threat to player and fan safety, Grapeland AD/Head Coach Wayne Mahaffey and Lovelady AD/Head Coach Jon Lowery agreed it was time to renew the Houston County rivalry.

Before the game a moment of silence was held to honor the victims of Hurricane Harvey and to show appreciation for all the brave men and women who risked their lives to try and save those victimized by the unprecedented flooding in Houston and Southeast Texas.

Following the pregame revelry, the two teams got down to the business of football. The Sandies won the opening coin toss and elected to receive.

On the kickoff, the Lions attempted a pooch kick that worked to perfection. Grapeland was unable to recover the ball and Lovelady took over at the Sandies’ 29 yard line.

The Grapeland defense held Lovelady’s offense and forced a turnover on downs. The Sandies took possession of the ball at their own 32 and marched down the field for the game’s opening score when Frauenberger connected with James Coleman in the corner of the end zone for a five yard TD pass.

The extra point attempt was no good, but with 5:07 remaining in the opening quarter, the Sandies led 6-0.

Following the kickoff, the Lions took possession of the ball at their own 38. Robinson engineered a drive to the Grapeland 29 by using Johnson on the ground and a variety of receivers. On fourth and three, however, Robinson’s pass fell incomplete and the Sandies took over on downs. 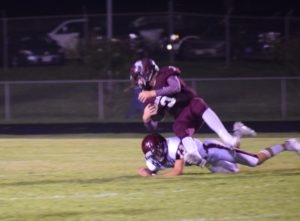 A three yard run by Grapeland’s Brayden Cheatham moved the ball out to the 32 yard line. On second down, Frauenberger had good protection and saw Howard had a step on the cornerback. The Grapeland QB lofted a pass towards Howard and the shifty freshman was able to run underneath the ball and take it the rest of the way to end zone for a 68-yard TD.

Frauenberger and Howard connected again on the try for two and with 39 seconds remaining in the first quarter, the Sandies led 14-0.

A three and out by Lovelady gave the ball back to Grapeland at their own 20 yard line. After Brannen Bedre was stopped for no gain on first down, Frauenberger and Howard teamed up once again. This time, Frauenberger hit Howard on a flare route and Howard did the rest as he took the rock 80 yards to pay dirt to make the score 20-0.

The Lions finally goy on the board the next time they had the ball. A healthy dose of Johnson running the ball into the middle of the Grapeland defense and some untimely penalties by the Sandies allowed Lovelady to move into the red zone. Back-to-back penalties on Lovelady moved the ball outside the 15, but Robinson connected with Michael Price for eight yards and then found McKnight in the end zone for a Lion touchdown. Johnson added the two point conversion and with just over five minutes remaining in the half the Lions had cut into the Sandies lead and trailed 20-8. 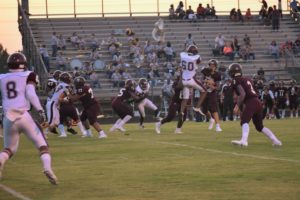 The score remained the same until halftime and through the third quarter. As the midpoint of the fourth quarter neared, the Lions put together a sustained drive which ended with Robinson fighting his way across the goal line from three yards out.

Robinson’s TD cut the Grapeland lead to 20-14 with 7:25 remaining to be played in the contest and set the stage for the dramatic conclusion of the game.

Frauenberger finished the night by going 16 of 24 for 370 yards and four touchdowns. Howard had eight receptions for 253 yards and two TDs. Ackley caught four for 63 yards, Wiley hauled in two receptions for 55 yards and a TD, while James Coleman caught two for two yards and a score.

Grapeland was led in rushing by Brayden Cheatham who carried the ball 12 times for 58 yards.

The Lions rushing attack was led by Johnson who carried the ball 26 times for 128 yards. Robinson ran the ball 17 times for 72 yards and a touchdown.

After the game Grapeland Coach Wayne Mahaffey discussed the win. “That was a great win, but to do it when you give up a touchdown and a two-point conversion with 51 seconds left and then to come back to score with 18 seconds still left on the clock, that was just great execution and a great team effort. I’m proud that they hung in there and got the win,” he said. 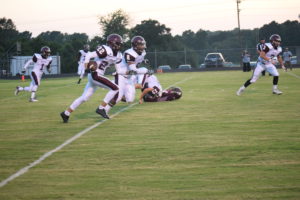 way he has progressed. You have to cover us if you can and it ain’t easy. It was also a fantastic freshman opener from BJ Howard. Offensively, he had one heck of a night.”

Lovelady Coach Jon Lowery remarked, “It was a good game. The only tough part about it was to go ahead and then lose it in the end. They made the plays. Hats off to them. It hurts because we came back to take the lead, but they won the game. I don’t look at it as we lost it.”

Lowery said the Lions simply made too many early mistakes to overcome.

“We had good field position in the first half, but couldn’t take advantage of it. We got in a 20 point deficit, came back and took the lead. That’s commendable, but it’s a 48 minute game and after 47 minutes we were winning. The only problem was there was still one minute remaining,” he said.