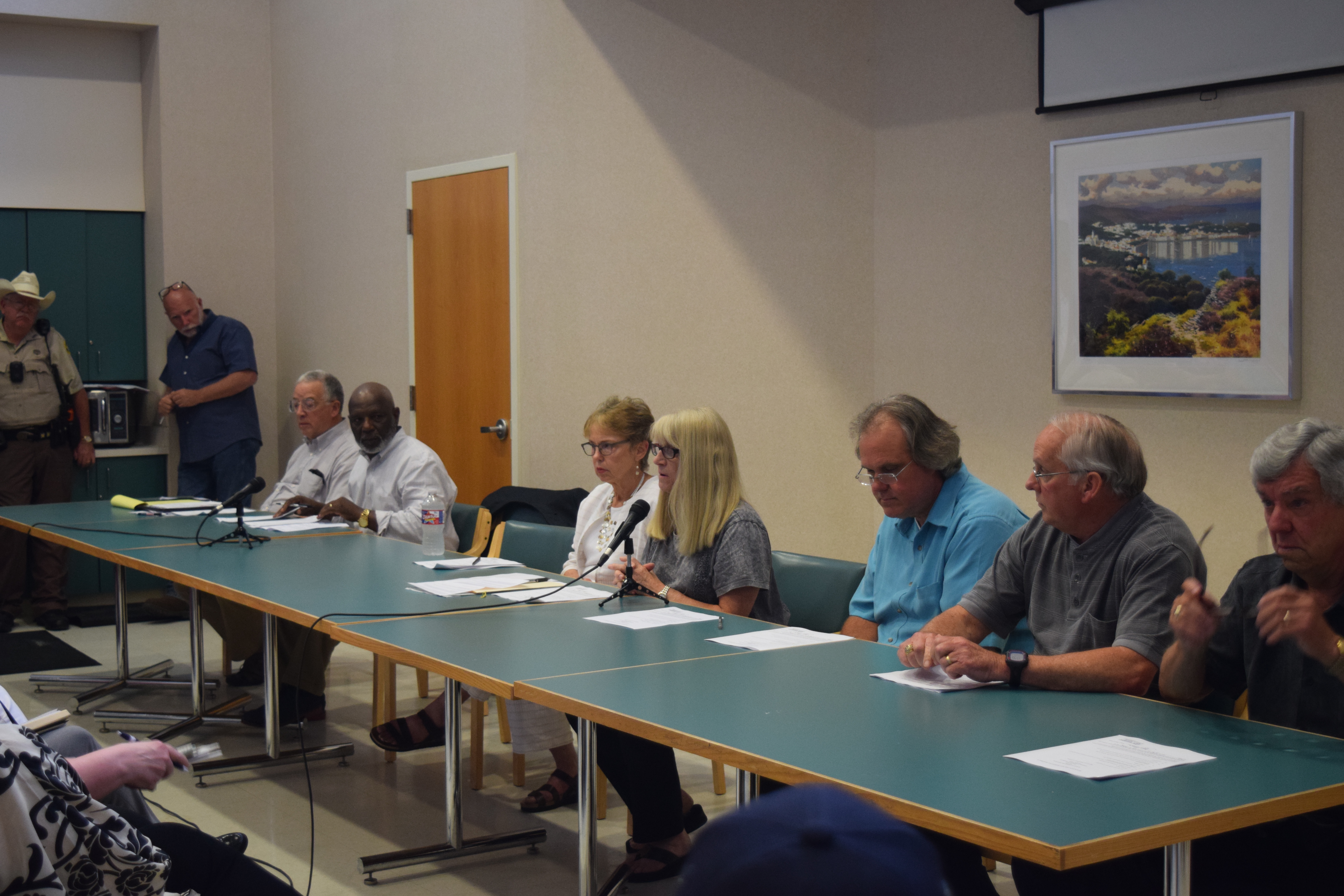 HOUSTON COUNTY – During a meeting of the Houston County Hospital District (HCHD) Board of Directors held on Tuesday, June 27, county residents and hospital employees were given a chance to voice their fears, frustration and anger about the probable closure of Timberlands Healthcare in Crockett.

On Thursday, June 22, Little River Healthcare (LRH) CEO Jeff Madison held a meeting with the entire hospital staff where he announced LRH would be ending its affiliation with Timberlands Healthcare, effective at the end of the month. LRH was the managing organization for the Crockett hospital. 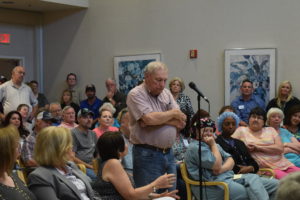 After dispensing with the formalities of June 27 meeting, HCHD Board President Deborah Porth Blackwell read a prepared statement – covered in the June 29 edition of The Messenger – to a capacity crowd gathered in the Timberlands Healthcare cafeteria.

Part two picks up after Blackwell concluded and opened the floor for public comments.

Among the first suggestions made was the possibility of bringing East Texas Medical Center back to the Crockett hospital.

The HCHD board was also asked if they planned to pursue criminal charges. Board member Tommy Driskell responded that he felt the board should, but added the potential hospital closure was a two-pronged issue.

“We have already made phone calls on that and as far as I’m concerned – and I’m only speaking for myself – I have never seen anything as unethical as this in all my years of doing business. I feel we need to pursue this (against LRH), whether it be criminal or civil,” he said.

“That’s only one part of it. The bigger part of it is we have been working frantically on figuring out a way to keep the hospital open,” he said.

Driskell later clarified his statement and stressed it was strictly his opinion.

“I wanted to clarify that I am not aware of any criminal conduct on the part of LRH, nor was I suggesting that criminal charges are being pursued,” he added.

As the meeting continued, an inquiry about the financial status of Timberlands and LRH was voiced by an audience member.

“Timberlands LLC – which is this entity – will be filing for bankruptcy, along with Little River who will also be filing bankruptcy,” Blackwell said.

“Is the board aware that LRH has signed a lease with another hospital (in Oklahoma) and that it was announced the same day they told us we were closing?” the same audience member asked.

“We are aware of this,” Blackwell said.

Former Houston County Judge Erin Ford commented when ETMC pulled out of Crockett they had basically stripped the hospital of all its equipment. The judge said it was a huge expenditure to rebuild the hospital inventory after the ETMC departure and asked if the hospital would be faced with this same scenario when LRH departed. 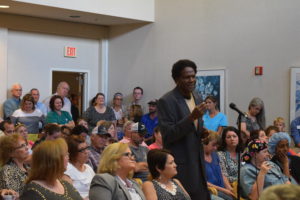 Timberlands CEO Jeff Perry was in attendance at the meeting to answer questions from the audience and replied there was only a small percentage of equipment owned by LRH. The majority of the equipment was owned by the HCHD, Perry said.

HCHD board member Dr. Bob Grier, followed Perry’s remarks and said when ETMC left Crockett the district had some money in its coffers.

Grier said in order to keep the hospital running with the necessary equipment, the board spent the majority of its financial reserve.

“We had approximately $4 million and went through that pretty quickly. We then got a line of credit – on very good terms – and we went through another $3.5 million. We thought we were fortunate when Little River came along. It turns out -with the internet and Google – perhaps we should have done a little more (vetting),” Grier said.

He added the board had spoken with doctors and staff at other hospitals LRH operated and received nothing but glowing reviews.

After re-emphasizing the board’s shock at the recent LRH decision, Grier addressed how the tax rate had increased after the ETMC departure. He explained how, after ETMC had left, the board had been forced to increase the rate from three to 15 cents (the maximum allowable amount under HCHD bylaws) to keep the hospital afloat.

“At the same time, that is not a choice anymore. We have until Friday (June 30). We have r

eached out to – I have personally reached out to six different healthcare entities. Two of them will respond, yes or no. This board has worked tirelessly …” he said, choking back his emotions.

Once Grier concluded, a question was asked about how much income, specific to payroll, would be lost in Houston County with the hospital’s closure.

Perry replied the current monthly payroll at Timberlands was approximately $1.5 million per month, inclusive of benefits.

Following an impassioned plea not to close the emergency room, an audience member inquired about hospital code compliance if the hospital did close.

“If we close this hospital on Friday (June 30) and cease to take care of patients, what is it going to take to reopen it? Do you have a timeline? Once it closes, will we lose the grandfather clause on the clinic itself? If it closes and we try to reopen it, we would have to come up to code and everything else that is required now to operate a new hospital building, right?” the audience member asked.

Blackwell said she had been in touch with various people and organizations about this very question, but had not received an answer as of Tuesday, June 27. 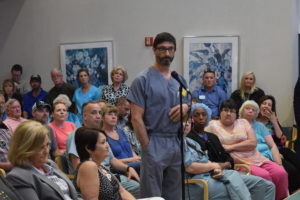 “It’s tough thing, once you close a hospital,” Perry explained. “You have to re-certify, come up to code and if you lose your provider numbers, it’s a tragic thing.”

Driskell explained after speaking with several healthcare specialists the previous night, it was his understanding the HCHD would need at least $1 million to cover expenses, until proper billing (along with collection) procedures could be established.

“I have heard several people have contacted political entities,” Grier said. “The Governor, the Lt. Governor, the AG, U.S. Rep Kevin Brady, U.S. Joe Barton, State Senator Robert Nichols, and State Rep. Trent Ashby – those are political people. They will come into play as Little River is investigated. The issue tonight is money. The issue tonight is money and we don’t have it.”

Timberlands employee Kasey Jeffries said she, along with several other employees would take a cut in pay to keep the hospital while another audience member said while he would not like it, he would willingly pay more in taxes to keep the doors open.

Other possibilities mentioned included asking for the public’s help in funding the hospital through donations or requesting Prosperity Bank to increase the current HCHD line of credit by $1 million.

Dr. Frank Smith addressed the board following a lull in the questions.

“This county – this breaks my heart. We’re not just talking about a hospital, we’re talking about the life of the county. We’re in trouble. I believe something that could help would be if you guys (the HCHD board) could borrow enough money to keep us afloat. You would have to run a lean machine, though,” he said.

“The hospital has been overstaffed,” Smith continued. “They (LRH) lied to the doctors. They knew when they took over the clinic on April 1, they were in trouble. We have to have medical care in this county, if this county is ever going to thrive.”

Smith was followed by Sherald A. Wood, the Managing Director of Phoenix Municipal Financial Advisors. Prior to her current position, Wood said she had been a healthcare underwriter and investment banker.

“We have run some numbers. The initial impact of losing this hospital could be as much as $50 million per year to Houston County,” she said.

As the meeting began to wind down, a question was asked about a specific amount it would take to run the hospital on a monthly basis. 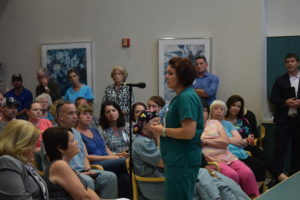 Several Timberlands’ employees pointed out the current situation was not the fault of the Crockett hospital but rather the incompetence shown at the corporate level of LRH. They also defended Perry’s job performance and stressed he had worked hard to make the hospital a success.

In the first part of this article, Yogi Berra was quoted as saying, “It ain’t over, till it’s over.”

Perhaps as time runs down for the hospital, a lyric from a Paul Simon song about a former teammate of Berra’s is appropriate.

Simon, along with Art Garfunkel, sang, “Where have you gone Joe DiMaggio? A nation (county) turns its lonely eyes to you. What’s that you say, Mrs. Robinson? Joltin’ Joe has left and gone away.”

And unless a miracle occurred after this edition’s press time on Friday, the hospital will also have gone away.