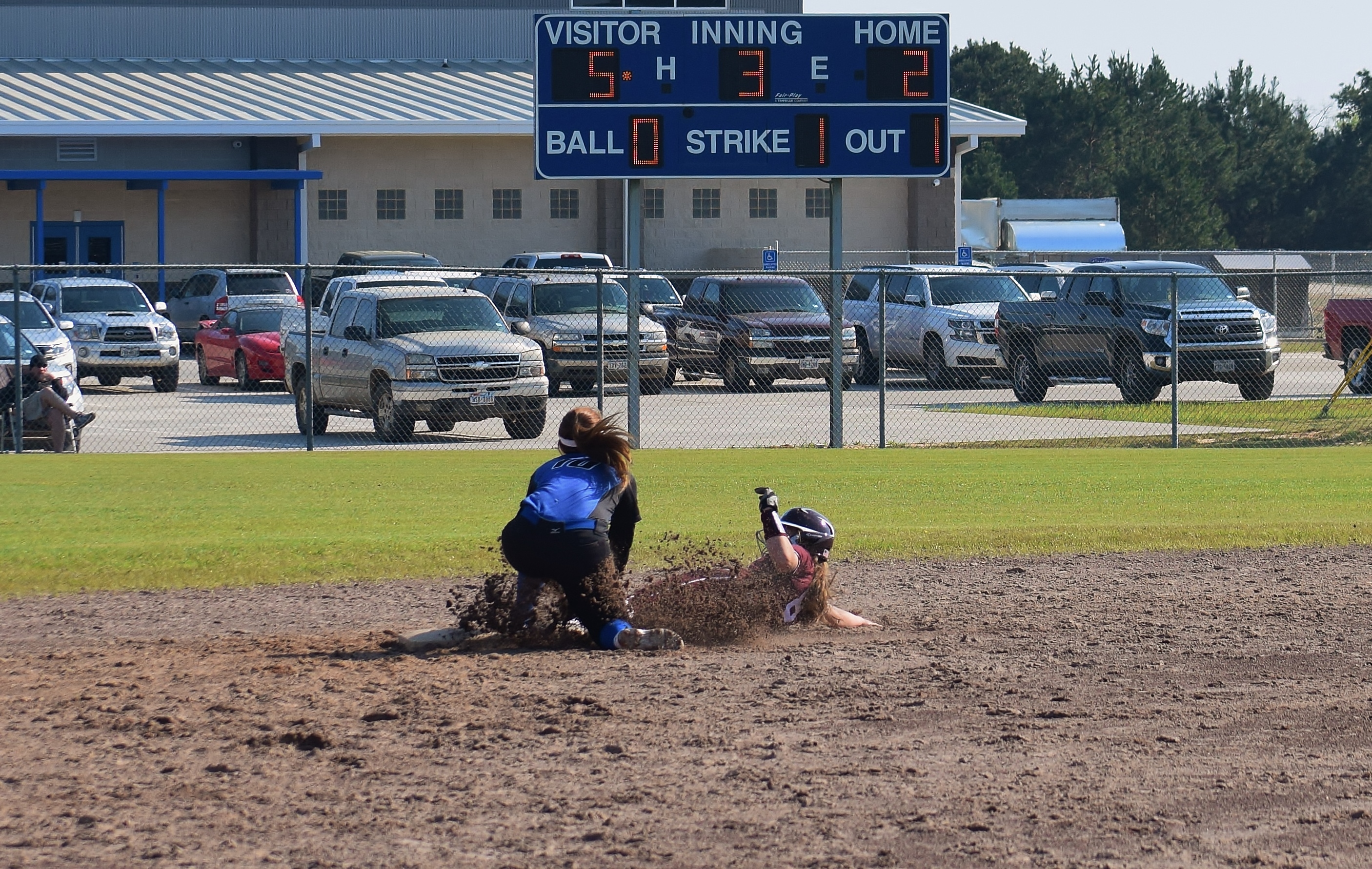 SLOCUM – If you missed the first inning of the softball game between the Grapeland Sandiettes and the Slocum Lady Mustangs on Wednesday, March 15, you missed nearly 90 percent of the runs scored in the entire ballgame. The Sandiettes jumped on the Lady Mustangs for five runs in the top half of the first inning while Slocum battled back for two in their half of the inning.

Grapeland added an insurance run in the top of the seventh and held off a Lady Mustang bases-loaded one-out rally to end the game and take home the 6-2 win.

The game did not start off well for Slocum. Taylor Clark was in the pitcher’s circle to start the game. Clark didn’t have her best stuff as the game got underway and walked the first three batters she faced.

When she walked Cadie Belle Currie to force in Taylar Mullen from third, Slocum Head Coach David Ives made a change in the circle and brought in Jalyn Fletcher.

Fletcher very nearly got out of the jam she was left with as she struck out the next two batters she faced. Next up was Megan Holbrook, who lofted a fly ball to shallow right center. Briley Evers got a good jump on the ball and appeared to have it before the spin of the ball caused it to pop out of her glove.

The error allowed Diamond Maines-Dunn and Hailee Sheridan to scamper home and make t
he score 3-0. On the play Reagan Bishop, who came into to run for Currie, moved up to third. She scored on the next pitch when Fletcher threw wild and made the score 4-0.

Holbrook took third on the same play and when Madi McCombs lined a shot into left field, Holbrook came home with the inning’s fifth run.

After Fletcher recorded the final out of the inning, the Lady Mustangs knew they had their work cut out for them.

Fletcher opened the bottom half of the first with a bunt single. After Kara Cumby lined out to short, Jessi Ives smacked a line drive to left field that was mishandled and allowed Fletcher to score all the way from first.

Ives came also came around to score on an error to make the score 5-2, but Currie managed to regroup and coaxed a pop-up from Makayla Bickerstaff and soft liner from Clark to end the first.

After a quiet second inning and top of the third, the Lady Mustangs loaded the bases with one out. The Sandiette defense came through for Currie in the clutch when Fletcher was thrown out at home on a slow roller down the third base line and Clark was caught at second on a 6-4 force.

It became a pitcher’s duel from there on. Fletcher only allowed three baserunners from the fourth through the sixth innings on a bunt single from Mullen, an error that allowed Holbrook to reach first and a bunt single from Hayley Reed. Reed made it as far as second but that was as close as any of the Sandiettes got to crossing the dish until the seventh.

Currie was even more dominant as she worked 1-2-3 innings in the fourth, fifth, and sixth.

In the top of the seventh inning, Grapeland added an insurance run to make the score 6-2. Maines-Dunn opened up the Sandiettes’ half of the inning with a walk and moved to second on a sacrifice from Sheridan. Currie was up next and crushed a pitch into the gap for a double which allowed Maines-Dunn to motor around from second to add a little security to the lead.

That was all the Sandiettes could muster in their last at bat and while it seemed to be enough, the Lady Mustangs had different ideas. Courtney January opened up the bottom of the seventh with a shot to Sheridan at third that was mishandled and allowed January to reach first.

Shelby Bowman followed January in the order and dropped a base knock into right field to put runners at first and second with no outs.

Currie recorded the first out of the seventh when she caught Laney Lasiter looking at a called third strike but a five-pitch walk to Fletcher loaded the bases.

With one out and the bases juiced, Cumby settled into the batter’s box and after looking at a strike, she hit a frozen rope right back to the circle where Currie caught the ball in mid-flight and turned and fired to Holbrook at first base for the game ending double play.

Currie got the win by going seven innings and giving up six hits and two runs. She also struck out three and walked one.