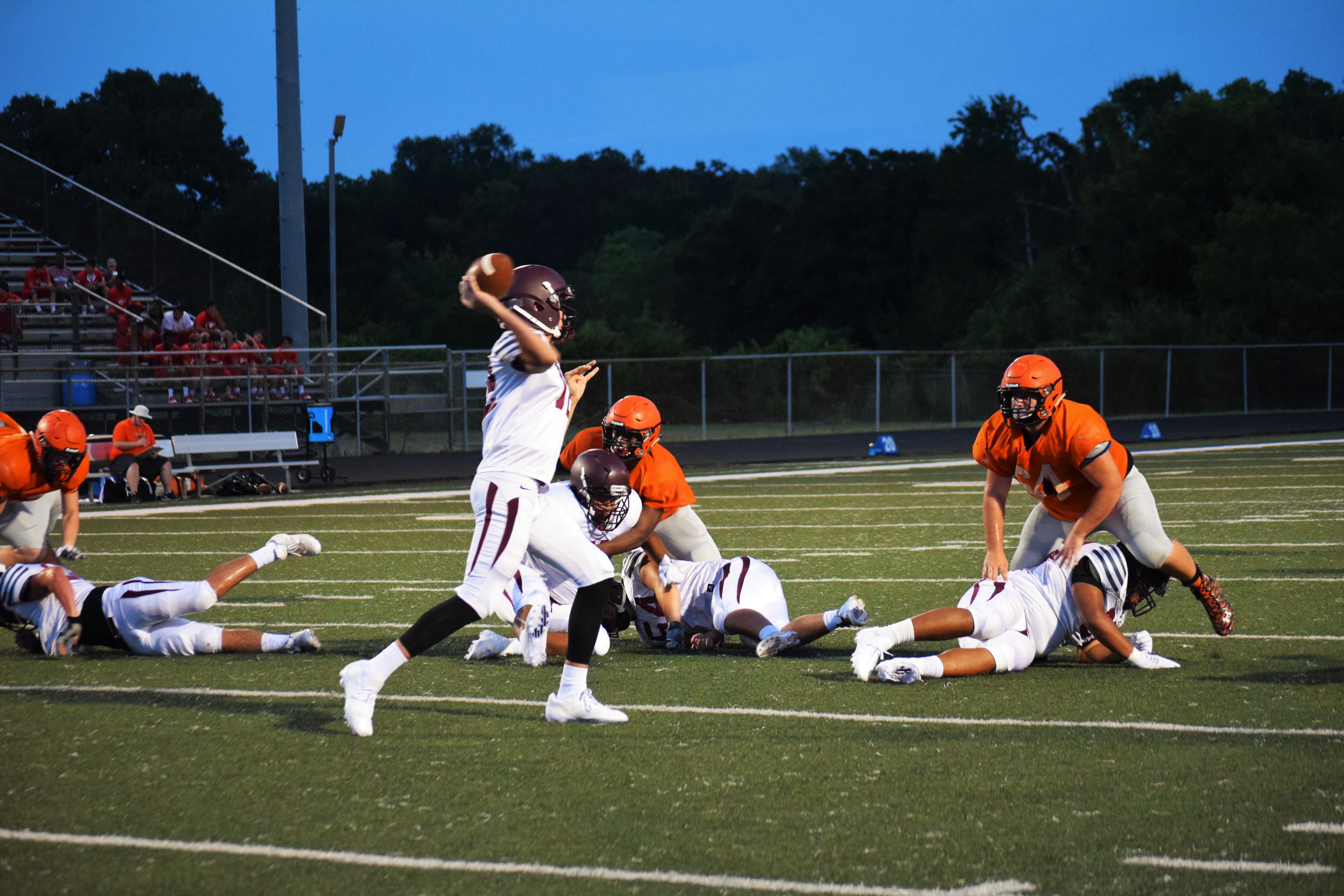 CROCKETT – The Grapeland Sandies wrapped up their pre-season last Friday night against the Trinity Tigers. The game was moved to Crockett’s Monte Jack Driskell Stadium because of the heavy rains during last week which saturated the field in Grapeland.

Apparently, Grapeland wasn’t the only field in need of a dryer. Prior to the Sandies and Tigers, the Garrison Bulldogs took on the Groveton Indians and with all four teams in action, the stands were packed with not just fans but coaches from different area schools. The Sandies were able to scout the Indians who they play the second week of the season and the Indians returned the favor when Grapeland took the field.

The Crockett Bulldog coaching staff was eying both the Tigers – who they open the season with – and the Garrison Bulldogs who they play in Week 10. The A contingent from the Lovelady Lions was also present as the Lions close the season with the Indians.

When Grapeland and Trinity finally took the field, the Tigers opened on offense but the Sandie 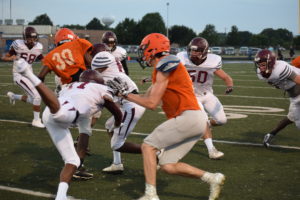 s were up for the challenge. The Grapeland “D” showcased its speed and ability to swarm to the ball and held Trinity scoreless on the first 15 plays.

The scrimmage rules allowed teams to finish a drive they had started if they were in the Red Zone and the Tigers were able to punch it in on the 16th play.

After the score, Grapeland took over on offense and looked crisp. Quarterback Rick Frauenberger was able to stay upright and untouched in the pocket as the line – led by Joel and Jacob Barbosa along with Cameron Riess – gave him plenty of time to find his receivers.

Frauenberger was able to connect with his receivers running free underneath and completed passes to both Riley Chipman and Rodney Davis for several short gains. In between, Kamari Smith hammered the ball inside for tough yardage to keep the Tigers on their heels.

The Sandies’ first drive was highlighted by a catch and run of 63 yards from Frauenberger to Josh “Bear” Ackley who moved the ball inside the 10 yard line before the Grapeland drive stalled.

The second defensive series of the scrimmage for Grapeland was dominated by Joel Barbosa as he blew up the Trinity offensive line time and time again. The Tigers started on their own 30 and in 15 plays could not cross the Sandies’ 40 yard line.

On Grapeland’s second offensive series, the Sandies moved Chipman to QB and primarily kept the ball on the ground. Ackley, Chipman and Smith did most of the damage, but Frauenberger came in for what appeared to be a passing down and surprised the Trinity “D” when he scampered for a 25 yard gain. Two plays later, Chipman was able to cross the goal from seven yards out to even things up.

The remainder of the scrimmage was a back and forth affair as both teams were trying to see what they had to work with before the season officially gets underway next week.

Following the scrimmage, Grapeland AD/Head Coach Wayne Mahaffey commented on his team and their performance heading Week One. “I think we’re pretty healthy and that’s one of the key points. I think we made progress from last week and played a lot better against a better football team. We moved the ball really well and scored quite a few times. We probably should have scored five times, but I think we only scored three.  I was pleased with our overall performance and I felt we did some good things both offensively and defensively – but – we still need a little more consistency,” he said. 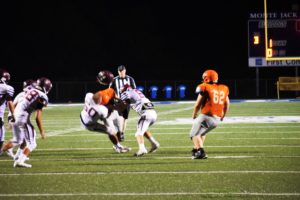 ed if he had finalized his starters for Week One, Coach Mahaffey indicated most of the staring positions were set but added, “There may be a couple of decisions we will be looking at this week.”

In regard to some of the deep pass routes run by the receiving corps, the coach said, “We forced them to change what they were doing coverage-wise. There were a couple of situations where we went for it on fourth down that we wouldn’t have in a regular game, but the whole thing tonight was just trying to move the football, run some plays and get better.”

Mahaffey also commented on the quarterback play during the scrimmage. “We have two good ones. Rick (Frauenberger) threw the ball really well and made a couple of nice runs. Riley (Chipman) … he’s just an athlete. He seems to be good at whatever he does.”

The coach also commended the offensive line for its efforts, but added, “We pass block great, but we still need to get a little more aggressive in our run blocking. We have to be able to run the ball better. I think we will though, as the season goes on.”