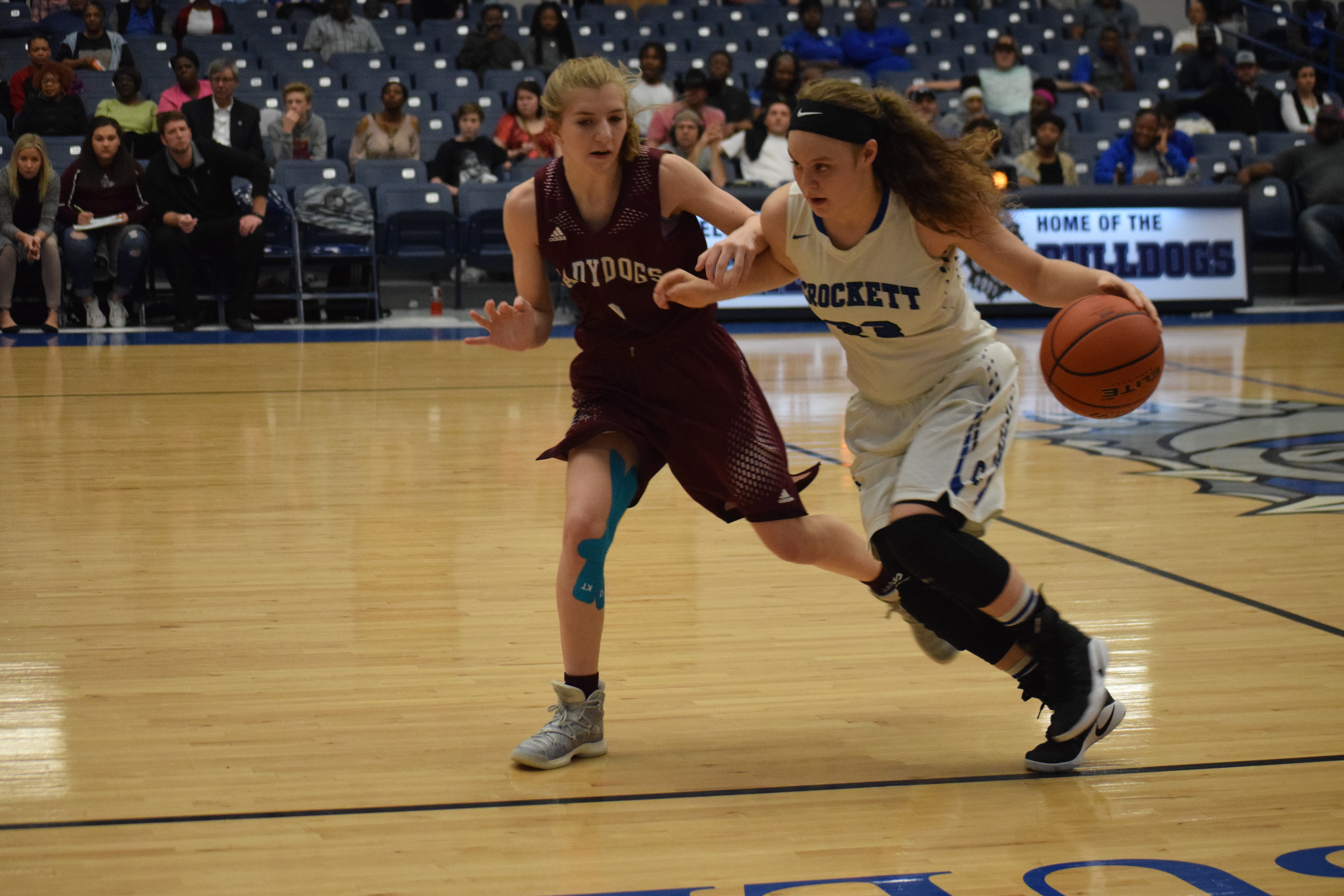 CROCKETT – It was a battle for the top in District 21-3A when the Crockett Lady Bulldogs welcomed the New Waverly Lady Bulldogs to the Andrew J. Hopkins Activity Center on Tuesday, Jan. 24. The two teams were tied for first place and entered the game with identical 7-1 district records.

Crockett had lost to New Waverly in the early part of district play by a score of 55-47 but had not dropped a district game since then. New Waverly slipped up against the Coldspring-Oakhurst Lady Trojans in their second district contest by a score of 52-48 but was unbeaten in league play after the loss.

Something had to give on Tuesday night and it was the Lady Bulldogs from Crockett who refused to back down as they walked off the court with a 58-53 win and sole possession of first place in District 21-3A with only three games remaining to decide who would be crowned as district champs.

The contest started out with Crockett on fire from the outside as the home team poured in 22 points in the first quarter. Dea’Junique James led the way with three, 3-pointers to go along with a two from the post for 11 points. Jada Lockhart hit four shots from the field and added a free throw for nine while Shelby Corry added a layup for two points as Crockett doubled up New Waverly, 22-11, after the first eight minutes of play.

The first quarter New Waverly points came from Kindallyn Reece with four of four shooting from the free throw line as well as a two from inside. Madison Spivey dropped in three and Jayde Walker chipped in two to account for the New Waverly first quarter scoring.

New Waverly began to find holes in the Crockett defense as the second quarter got underway and cut the lead to one as the teams headed to their locker rooms at halftime. Spivey led New Waverly with six second quarter points while Marissa Adams broke into the scoring column and joined Walker with four points in the period. Reece added three and Amber Walls chipped in a free throw to close out the first half New Waverly scoring.

James continued to pace the home team with four points in the second quarter but picked up her third foul with just over four minutes remaining in the half. Mercedes James made two of three from the line and Tynashia McKnight dropped in two to keep Crockett ahead at the break, 30-29.

While D. James led the way for Crockett in the first half, it was her teammate Shelby Corry who took over the second half. Corry’s ball-handling skills and three point range kept New Waverly at bay as the senior scored six points on a three, a two and free throw. Anastasia Bolton added a 3-pointer while D. James, M. James and Lockhart all dropped in two to push the Crockett lead to four with one quarter remaining.

Reece would not let New Waverly fold up its tent and go home as she scored eight points in the period while Spivey added four to keep the game close, 45-41, after three periods of play.

New Waverly continued to battle and when Adams hit a two from outside, the visiting Lady Bulldogs took a one point lead, 46-45, with 6:10 remaining.

Corry came through in the clutch for Crockett, however, as she nailed a 3-pointer from the wing to give the host Lady Bulldogs a 48-46 lead at the 5:49 mark.

Spivey hit a two for New Waverly to tie the game at 48, but D. James untied it with a two from the post. After McKnight made a layup, Crockett led 54-50. With 37 seconds left in the game, Walker converted one of two from the line. D. James followed with a two but after Adams knocked down a shot, the s

With the game now a one-possession contest, Crockett put the ball in the hands of Corry and the senior delivered the knockout punch as she converted two from the charity stripe to ice the game and give Crockett the 58-53 win and sole possession of first place in District 21-34.

Madison Spivey scored 18 points to lead the New Waverly scoring attack. KIndallyn Reece netted 17, Marissa Adams had 10, Jayde Walker dropped in seven and Amber Walls made one of two from the line to round out the New Waverly point production.

Crockett was led by the dynamic duo of Dea’Junique James and Shelby Corry. D. James went for a game-high 21 while Corry had 15, with 13 of those points coming in the second half. Jada Lockhart added 11 as both Mercedes James and Tynashia McKnight had four. Anastasia Bolton added a three to round out the Crockett scoring in the game.