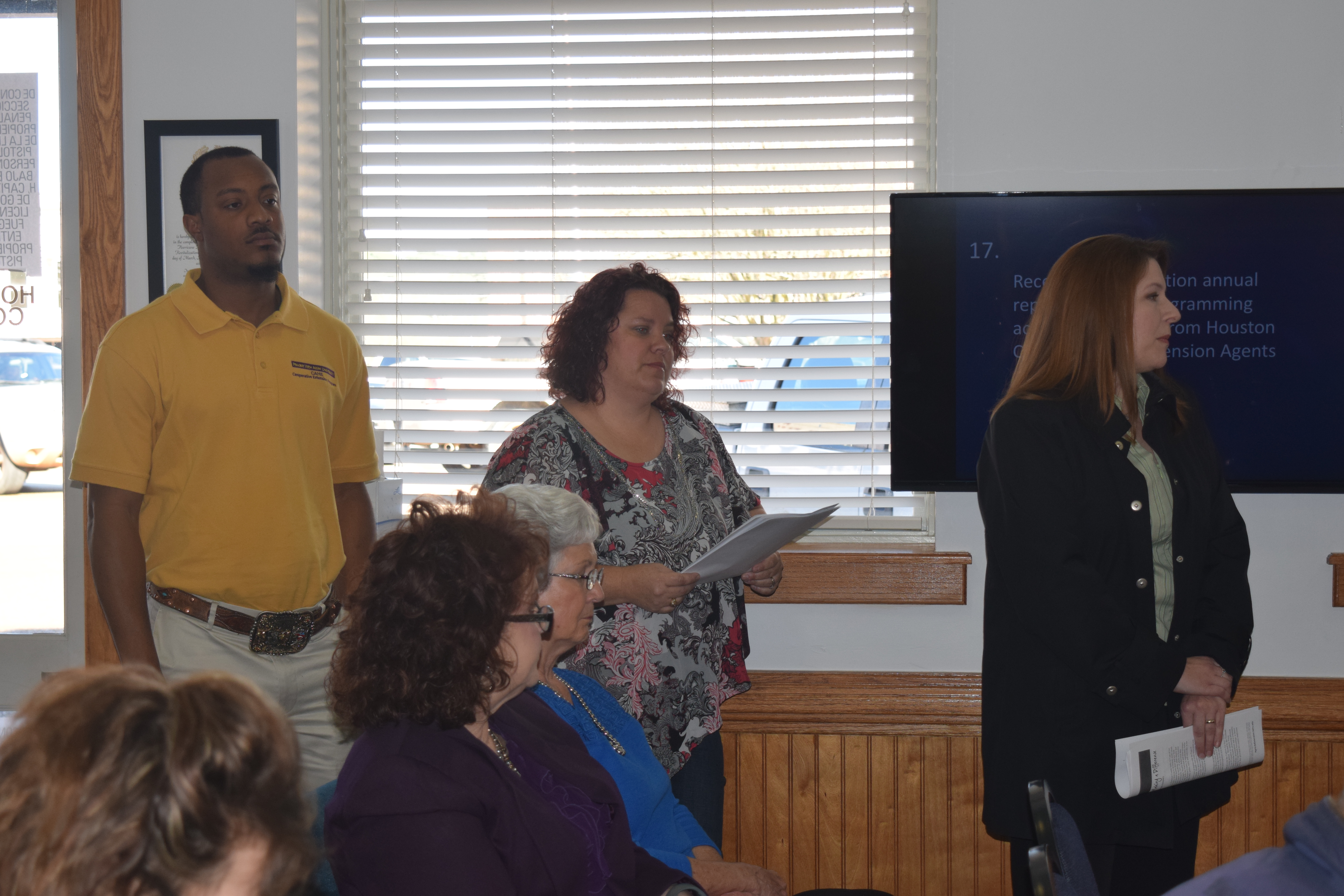 HOUSTON COUNTY – It was business as usual for the Commissioners Court of Houston County as they met in their regularly scheduled meeting held on Tuesday morning, Jan. 24.

Highlighting the meeting was a presentation given by Houston County Agrilife Extension Agents Mandy Patrick, Jo Smith and Corey Hicks.

Patrick began the presentation and said the three agents were present in the court to explain what the agents have accomplished over the previous year.

“I am the family and consumer science agent and the program I am going to highlight for you today is work site wellness, because that ties back to all Houston County employees. Some information on Houston County, we rank about 217 out of 241 counties that report to the County Health Rankings,” Patrick said.

She added that shouldn’t come as a big surprise because the county has a high poverty rate and a high chronic disease rate because of an aging county population. Some of the factors that contributed to the ranking included a premature death rate (death before the age of 75, low birth weight, smoking, adult obesity and low levels of physical activity.

Patrick said in her role as an extension agent, she had initiated several programs to try and improve the factors including: programs on cardiovascular screenings; programs on the Zikha virus; a partnership with the Crockett Resource Council on Independent Living; and the launch of several fitness programs.

Next to speak was Smith who explained her role in the extension agency.

“My program is beef and forage as well as youth. I actually have three summaries in your package because water is the main issue. It’s really not affecting us yet but as the bigger cities start getting bigger and start encroaching on the smaller areas, we will start seeing some water issues. I guess we have maybe been out on the forefront of hitting some water issues,” she said.

Another areas Smith discussed was the Science of Ag Day “… where the kids actually get to come to the Ag Arena and have hands on learning for agriculture.”

Hicks closed out the presentation and said he was with Prairie View A&M Cooperative Extension. “Our target is to build educational programs for small acreage producers. With that, I have three different plans I work from and those are the small acreage horticulture crop production plan; the small acreage livestock and forage plan; and also the 4-H youth and government,” he said.

The program described by Hicks was the emerging needs issue. “That was like when we were getting a lot of rain earlier this year and a lot of the farmers were losing their land through soil erosion,” he explained.