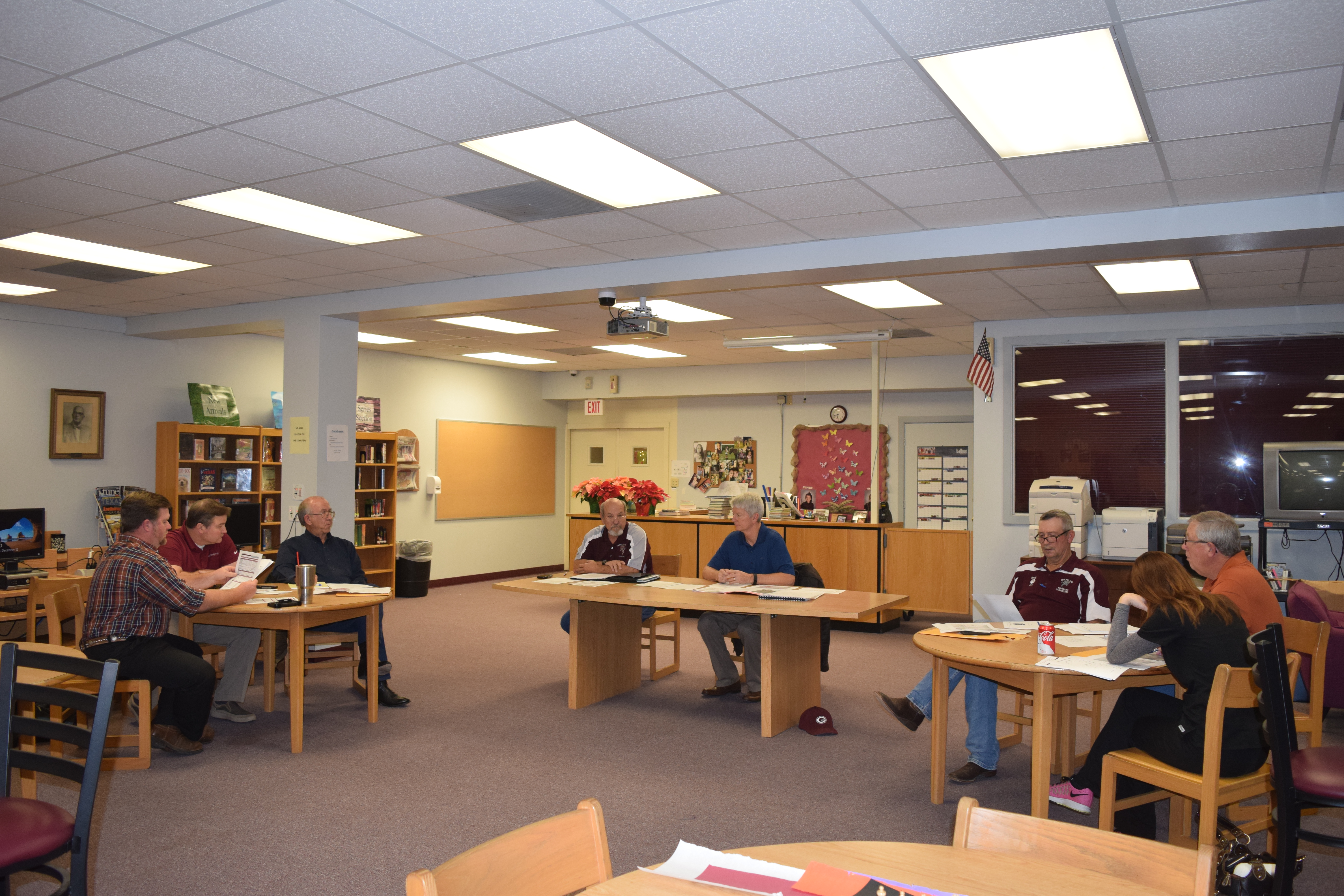 GRAPELAND – During a called meeting of the Grapeland ISD Board of Trustees, the board members deliberated what course of action to take concerning the Grapeland Elementary School.

“The main reason we called this meeting tonight was to look at some updated information provided to us by our architects. We need to discuss the direction we want to go – whether it is a new facility and/or a renovated facility,” GISD Board President Eddie Childress announced during the meeting held Monday, Dec. 12.

He added with the district’s regularly scheduled meeting set for Monday, Dec. 19, he wanted a chance for the trustees to have time to thoroughly look at the revised architectural drawings as well as to try and avoid a lengthy meeting next week.

“This allows the board to come together in executive session to look at properties and look at a plan as to where we are going. Next Monday, we will make a decision – one way or another,” Childress said.

The board president also commented if anyone from the public had been present at the meeting, they would have been more than welcome to express their opinion on what to do with the elementary school.

With no members of the public present, Childress inquired if any of the media members had questions about the project.

The first question asked pertained to the architectural design revisions.

“We had asked the architect to look at some different things since the last meeting (a town hall style meeting held on Nov. 28),” Childress said.

He added the board needed to reach a formal decision by next week so the architects could begin the finalization process and provide the district with an accurate amount of cost by February. The month of February is the deadline for placing a bond initiative on the May 2017 ballot.

Specifically asked about the amount of square footage originally proposed and what was proposed in the revisions, Childress said the original design was approximately 48,000 square feet.

“We had enough people ask us to look at different scenarios and where that would be if we reduced it. That is what we are going to look at tonight,” he said.

“The one we are going to look at tonight calls for 44,867 sq. ft.,” GISD Superintendent Gregg Spivey said.

“That is for the new building,” Childress said.

“Now, we may not go that low but it gives us something else to think about,” Spivey added.

Childress said the square footage cuts came mainly from the gymnasium/multi-purpose room and moving from two science labs to one as the district initially requested.

“Once we make a decision next week, whether it’s going to be new or a renovation,” Childress said, “then we can get with the contract managers-at-risk and after meeting with our site-based committee, the final numbers will start to become clear. Until we say this is the type of building we are wanting, those numbers won’t be finalized until February when we have to say the amount will not exceed a certain amount.”

Before the board adjourned into executive session, Childress was asked if he felt the board was leaning towards new construction or towards renovation.

“We can go with either one and be happy, as long as we are in one accord,” he said.

With no further business to discuss in the open portion of the meeting, the board adjourned into executive session at 6:23 p.m. No action was taken on the matter when the board later reconvened in open session.