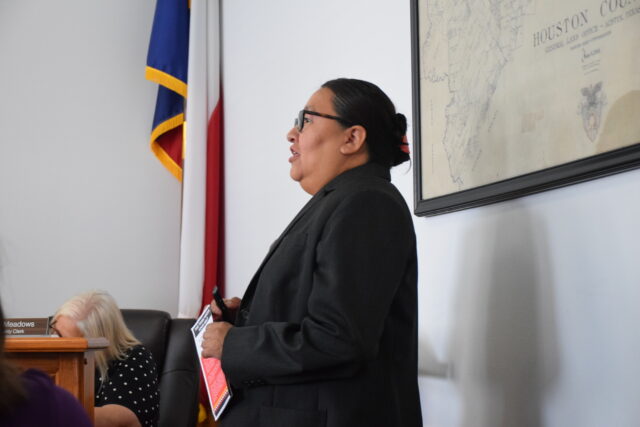 HOUSTON COUNTY – During a meeting of the Houston County Commissioners Court held on Tuesday, Sept. 10, the commissioners showed their support for the Alabama-Coushatta Tribe of Texas by joining with other counties in East Texas in adopting a proclamation to protect tribal economic development.

Yolanda Poncho, the Cultural Marketing and PR Coordinator for Naskila Gaming was on hand to discuss the proclamation and why it was important to the Alabama-Coushatta tribe.

After introducing several members of the tribe who had joined her in attendance, Poncho said, “We have been going from county-to-county to try and get support for House Resolution 759 and we would like to show you a small presentation that will take a quick 10 minutes of your time.”

Introduced in the US House of Representatives by Rep. Brian Babin (R-TX), HR 759 “…amends the Ysleta del Sur Pueblo and Alabama-Coushatta Indian Tribes of Texas Restoration Act, which restores the federal trust relationship between the United States and the tribe, to prohibit the Act from being construed to preclude or limit the applicability of the Indian Gaming Regulatory Act,” according to the www.congress.gov  website.

“We have been to Trinity County, Walker County and Cherokee County to garner support. We are on our way to Anderson County and Leon County once we are done here. I would also like to show you how we have made an impact on East Texas,” Poncho said.

As the presentation began, a brief history lesson was given to the court on the relationship between the tribe and Sam Houston.

It was stated a pact was made whereby the Alabama-Coushatta should be left alone to govern themselves and “… in 2015, our tribe was authorized by the National Indian Gaming Commission to offer fast food and Indian gaming on our tribal land. In 2016, the Alabama-Coushatta opened the doors to Naskila Gaming and offered electronic bingo entertainment on the reservation, just off State Highway 190 between Livingston and Woodville.”

Since its opening in 2016, the presentation indicated Naskila Gaming had created over 560 new jobs in East Texas and had injected nearly $140 million of annual revenue into the region. In addition, Naskila Gaming had provided nearly 50 fully paid scholarships to high school students and provided over $500,000 in aid following Hurricane Harvey.

“Now, the state of Texas is challenging our rights to operate Naskila Gaming,” the presentation stated.

At issue, the state of Texas has obtained a court order declaring that the Alabama-Coushatta venture is subject to state law – and therefore illegal.

According to the Houston Chronicle, “The protracted legal fight pits a conservative state that allows scant forms of gambling against a federally recognized Native American tribe that believes it has the authority to allow gaming on its own land and get a share of what is now a $31.2 billion industry.”

Poncho said the tribe had a long history with Sam Houston who gifted the Alabama-Coushatta with tracts of land when Texas went to war with Mexico.

As she continued, Poncho inadvertently revealed a sad truth. She said when you cross the border into Louisiana, most of the casino parking lots are filled with Texas license plates. That is in spite of the state of Texas’ desire to cast itself as a beacon of morality.

It also gave a good indicator of where the money to fight the Naskila Gaming operation is coming from – the Louisiana gaming operators.

“We want to keep the Texas dollars in Texas,” Poncho said.

The proclamation, in part, states “Now, therefore, be it resolved that Houston County Commissioners Court hereby joins the Alabama-Coushatta Tribe of Texas in support of its effort for passage of HR 759 to clarify that the tribe can enjoy the opportunity for tribal economic development on terms that are equal and fair, and to protect jobs. Further, Houston County Commissioners Court urgently requests that United States Senators John Cornyn and Ted Cruz of Texas, as well as other 35 Texans elected to the United States of Representatives, join Congressman Babin in securing the enactment of HR 759 into law.”