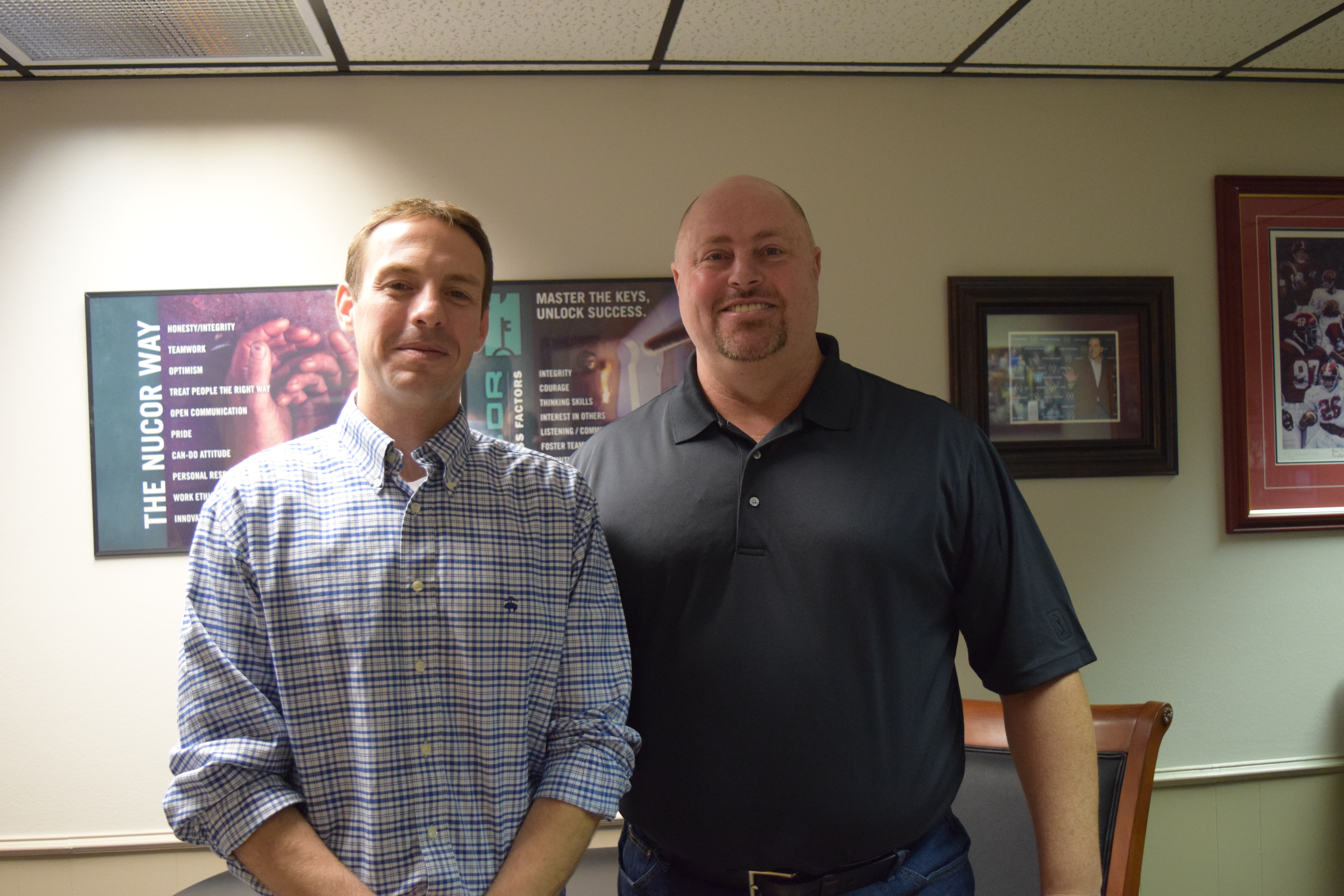 GRAPELAND – With the recent resignation of Vulcraft General Manager Mike Heine and the retirement of Production Manager Allen Cheatham, the largest employer in Houston County had two very big spots to fill. After applications for the positions had been submitted and interviews conducted, the decision makers for Nucor – the parent company of Vulcraft – selected Kevin Barksdale as General Manager and Josh Wall as the Production Manager for the Grapeland plant.

Both have been in their respective positions a little over a month and earlier this week, they spoke with The Messenger about their backgrounds, their management philosophies and how they have been made to feel welcome in the community by both employees and residents of Grapeland and Houston County.

“I was at the Nucor Division in Fort Payne, Ala. and was their six years this last time. I actually started with Nucor in 1989 at the plant there in Ft. Payne,” Barksdale said.

Asked what led him to begin his career with Nucor, he replied, “It was God’s hand upon me showing me that was where he wanted me to be. An opportunity came up and I followed his leadership, applied and got the job. I started out as an entry-level rigger.”

The general manager was also asked if he ever envisioned being a GM nearly three decades ago. “Never. I never envisioned that. The reason being is that I always look at doing the best with what is in front of me, right now. I do look ahead, but my focus is right now. My focus is who I am supposed to serve and minister to, right now.”

The production manager was also asked about his background with Nucor. “I started with Nucor at our corporate headquarters in Charlotte, N.C. in a talent management role, working on behalf of recruiting and developing leaders for the future.  I was there for three years before going to our start-up steel mill in Memphis, Tenn.,” he said.

Wall said while Nucor typically locates facilities in smaller communities, the Memphis plant was a company acquisition. “We typically look towards the rural areas because of small town values that align with the way we lead our business – doing the right thing, taking care of our team, character and a strong work ethic – those types of things.  The facility in Memphis was pretty close to the downtown area but with that division, it was actually an acquisition we purchased. We basically rebuilt that division, but the shell was there when we purchased it from Birmingham Steel,” he said.

As to how he went from talent acquisition to production manager, Wall said, “That is the beauty of Nucor. Like Kevin was saying, when you find a company like Nucor, and it matches your personal beliefs, when you have a company that aligns with who you are personally, there are so many opportunities that come up within the company. You are not relegated to one career path or another. I got to visit divisions across the country in that talent management role. I had a desire to be in operations so I left the corporate office and went to the start-up in an entry level position. That started my love of operations and now I find myself here in Grapeland.”

“The key to it,” Barksdale added, “is the correct leader and the correct seat on the bus. Sometimes, that is the guy who has worked his way up and paid his dues, but sometimes it’s this guy (Wall) right here who I know is the exact person we need for this division at this moment. I am seeing the benefits of this already.”

Wall continued along the discussion thread and commented, “The beauty of what you have here with Kevin and myself is this is not old Nucor and new Nucor. This is Nucor. This is how we have always done it and there has always been a balance in finding the right leader for the right spot.”

Asked if he felt any pressure coming into his role as GM in Grapeland to live up to the standards set by several of his predecessors, Barksdale said, “There is never going to be more pressure applied to me than what I put on myself. What I put on myself is taking care of these teammates we have in Grapeland. It is our goal to take care of our customers, but our number one customers are our teammates. Doing that to the best of my ability – there is no greater pressure than that being applied. I definitely don’t want to have to worry about living up to someone else’s expectations of me. I’ll have one person (God) to answer to. I look these people in the face every day and they are the ones I’ll answer to. I’m here to work for them. That is who I work for. The CEO may sign my check, but this is who I work for.”

Wall re-emphasized Barksdale’s point and said, “I talked with one of our teammates and he told me there is a lot of energy around this place with good Christian leaders coming in to get this division going in the right direction. I told him I wanted him to have the highest expectations for both Kevin and myself because I will scramble every day to live up to those expectations. I want to put actions to the words we are talking about.”

Their management philosophy was also discussed. “First and foremost,” Barksdale said, “we are going to operate as a family and a team. If we operate in that manner, we are going to be successful. Dan DiMicco, our former CEO, always ended any call our informational output he had by saying ‘Let’s do it together.’ That’s one of the main reasons I’m with Nucor and aligned with their beliefs.”

Gesturing to several pieces of Alabama Crimson Tide memorabilia decorating his office, the GM continued, “I’m a big team guy. You look at the Alabama stuff hanging around. Playing sports in high school – I’m a team guy, I’m a family guy. That’s my philosophy, as far as what we are going to do as a team.  From a business standpoint, we are going to be aggressive. We are definitely going to be the market share leader in this territory. We are going to take the lion’s share of every ton that is out there through efficiencies and strategies we have in place. It is all going to revolve around this team and the family atmosphere we have. We are going to succeed together.”

Wall said he agreed with Barksdale’s approach and furthered, “We’ve got the right folks. It is a matter of setting the right course and removing obstacles for them. We are investing in people, equipment and talent – all of the things we need to not only sustain this business, but grow this business. As we talk about taking over market share and taking more aggressive positions in the market, you have to do that by expanding your capabilities. We are doing the things today to invest in business five, 10 or 20 years from now. We are going to be here for the long haul and we are going to invest in our future.”