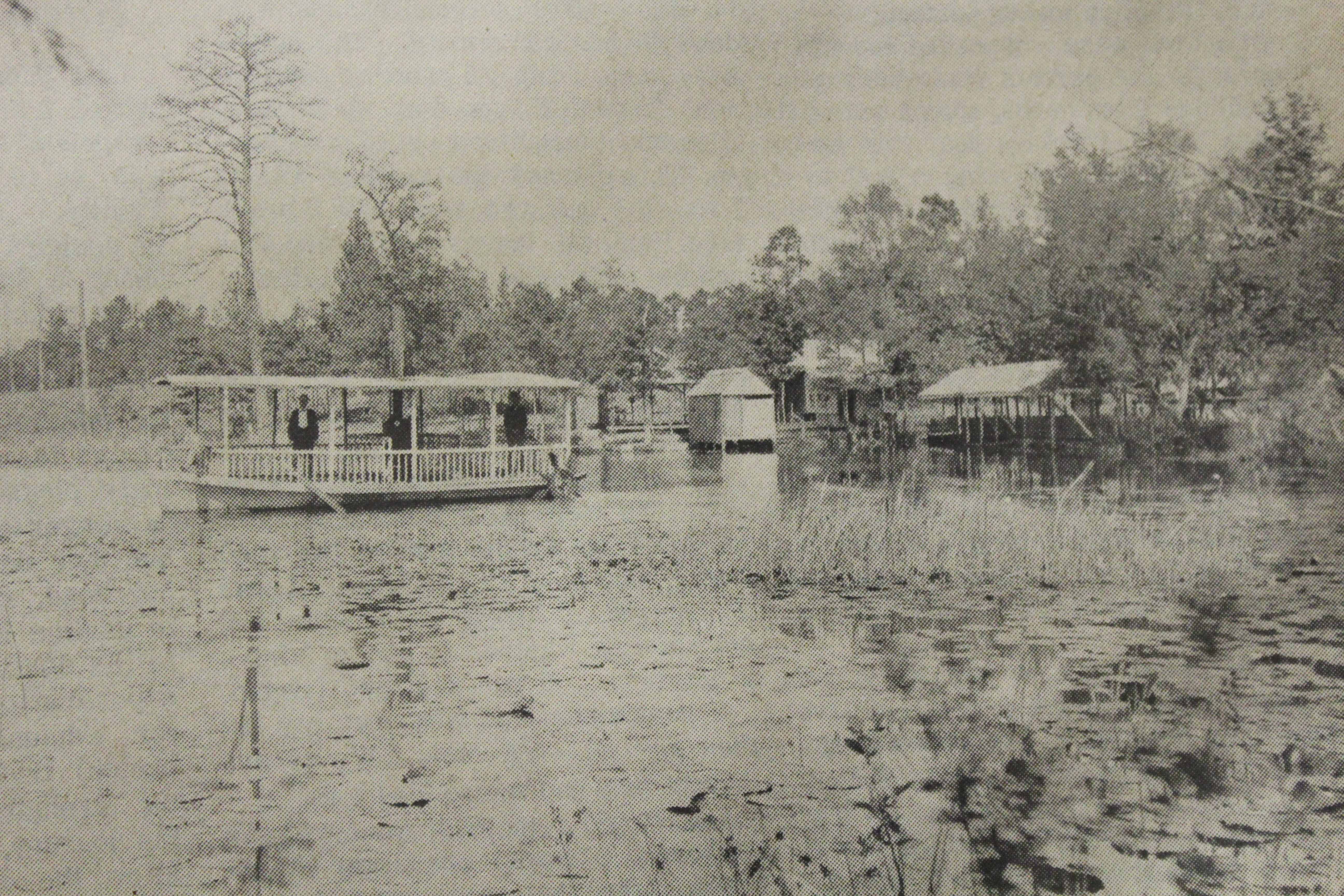 The Mystery of Myrtle Lake
By Teresa Holloway
Messenger Reporter
GRAPELAND – There are some mysteries so old even time itself has nearly forgotten them and the Myrtle Lake Resort off Lockout Road in Grapeland would qualify for that category.
In the early years of the 1900s, Myrtle Lake Resort was the recreational area of choice for Grapeland residents. Many out-of-towners enjoyed the tour into the East Texas forest which ended in surprisingly modern entertainment.
There is only one located photo, no history on the paddle boat’s owners or the group of enterprising locals who dammed and built the levee in the Pedro and Bennett Creek area. No one seems to know what happened to the boat later.
Because of the intervening years and lack of historic recording, much mystery surrounds the area. Most visitors or residents who may have visited the resort have long since passed away and stories from the lake’s dedicated patrons are gone, now. Only a handful of heirs remain to recount tales told by their ancestors.
Soon even the stories will follow the lake into the mists of the past.
The spillway erected on Bennett Creek or Pedro Creek, even the creek name is debatable, once created and a lush, fertile two acre aquatic environment. The old picture shows a cut over area where the forest has been thinned drastically.
The resort provided not only entertainment for the community, but also a needed haven for tropical plants and native species such as birds of paradise shrubs and palmettos, fish and deer.
The paddle wheel boat and pavilions with electricity – almost unheard of in those days – once held dancers and dreamers. One can imagine the sound of the frogs and crickets underscoring the old gramophone music, perhaps soothing the brow of genteel ladies adorned in lacy gloves and crinoline skirts. It doesn’t require much imagination to hear water lapping beneath the boat, feel the deck gently moving beneath booted feet.
Fine young gentlemen in ascots, waistcoats and flat hats frequented the resort. In those early 1910 to 1920s years, fashion was crucial as it was a statement of wealth and power in an era where very little of either could be found.
There were rumors of gambling and drinking on the boats, both of which were considered taboo in the era, but none of the rumors were proven.
The few remaining stories around Grapeland have the same theme; Myrtle Lake Resort was once the meeting place for the wealthier families in the area and an entertainment venue for incoming visitors of note.
Mr. Dan Walling of Grapeland, now in his 80s, has a few vague memories of the old resort. “I know from what my father told me, down the road here a couple of hundred yards, Myrtle Lake was just a little further down from the Y, going on straight.
“Sometime in the early 1900s, some local folks got together and built a concrete spillway and earthen dam. It allowed the Pedro Creek to build up, or Bennett, whichever it was called at the time, until it was two or three acres in size.
“They had a pavilion or floating pavilion, it was fair sized. It was big enough to have a party on.
There were some bathhouses and changing rooms,” he recounted. “It was open to the public at the time. It wasn’t an exclusive club or anything.
“It only lasted about five or six years. About early 1920s, a big storm came along and washed out the dam and spillway which was not all that well built to begin with,” he shook his head. “That was the end of it.”
There are shattered and broken old bricks on the downward side of the old levee. 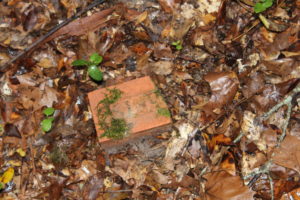 Bob Rounsaval agreed. Rounsaval’s father –in-law, Leon Leamons, regaled him with a few stories from his childhood.
“When he was a very young man, in his teenage years, he said there was one of those paddle boats on the lake. He said they did have gambling on it … it was a party boat.
“According to Leamons,” Rounsaval recalled, “The boat went as far down as Boots Skidmore’s place. That would be about two miles. It was a pretty good sized lake,” he said.
Rounsaval was one of the first to locate the old levee site. His property encompassed the area and he explored the area extensively on foot. “All of the sudden, one day I just walked the other way and there it was – those concrete pylons. Trees had grown up in there. It had a washout on the spillway side of it,” he recalled.
The earthen works and concrete are still clearly visible, an echo of a lively past now forgotten. 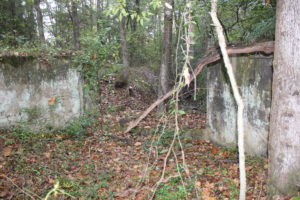 Myrtle Lake no longer slumbers beneath young oak trees. The waters have long since dried away under the Texas sun despite the maturing trees’ shade. Only a few seeps remain in the darkest hollows.
The area is all but unrecognizable. Within a few years even the remnants of the early concrete spillway will disintegrate into rubble, and the forest, drinking from the many natural springs in the area, will succeed in its mission to reclaim the once popular lake site.
Already Mother Nature has made progress though one can still discern the earthen walls and water level line of the old dam above the former lake bed.
The water logged stumps have almost disintegrated to ground level but, as if in silent testament to the former glory days of the absent lake, stubbornly refuse to give way completely.
Here and there broken bricks are strewn about, probably victims of the 1920s flood that also removed their host.
With a little imagination one can hear the tinkle of crystal glasses across the water and laughter, accompanied by the whir of the paddles. Soon, even those old shades will fade.
Too far back to remain even in memory, the mysterious Myrtle Lake Resort is wreathed in the fog of the past as surely as this morning’s fog over the old levee.
Another small part of history has been consigned to the province of myth and legend in the Grapeland area.
terholloway@hotmail.com