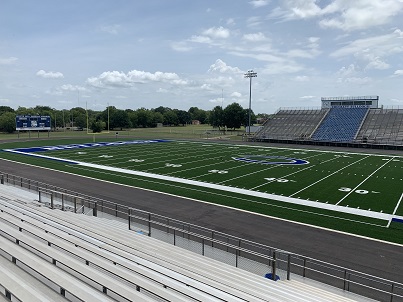 CROCKETT – It doesn’t happen very often when taxes are discussed, but on Monday, July 29, the Crockett Independent School District Board of Trustees gave taxpayers something to smile about.

During the regularly scheduled Monday night meeting of the CISD board, the trustees approved a proposed tax rate of $1.18 per $100 of valuation for Fiscal Year 2020. The current CISD tax rate is $1.25.

As the tax rate discussion got underway, the trustees approved the date of Monday, Aug. 5 for a budget workshop for the 2019-2020 school year. The workshop will begin at 6 pm.

Once the budget workshop date was set, Crockett ISD Superintendent Terry Myers addressed the board and those in attendance and said the district would receive a tax compression.

According to the Texas Comptroller’s Office, “One of the most important elements of the 2006 school finance reforms reduced local property tax rates throughout the state. It did this by establishing a compressed tax rate (CTR) for each district. A district’s CTR is its 2005 M&O (maintenance and operations) tax rate multiplied by a state-set 66.7 percent, effectively reducing the 2005 rate by a third.”

“We knew we were going to get the tax compression this year,” Myers said. “It will be compressed to 97 cents. We are recommending that we leave our I&S (interest and sinking) rate (as is) until we figure out how long this will play out in the district. We recommend leaving the I&S rate at 21 cents giving us a total proposed tax rate of $1.18, down from $1.25 last year,” he said. 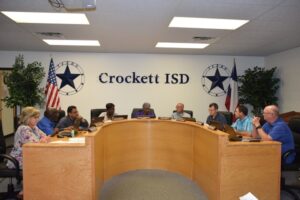 Asked how this would affect the district’s revenues, Myers said the revenue “… should be about the same. It may vary a little bit, but it is designed to make the revenues exactly the same. With the increases from the state, the district is going to be in better shape anyway. This is what we reported all along, during our election process. There was not going to be a tax increase, in fact there would be some reduction in the tax rate.”

Prior to the tax rate discussion, Myers addressed the board concerning a contract with ABM Janitorial Services.

“This is will be the third contract amendment – the last one we can do without re-bidding our custodial services with ABM. Last year they did not have a CPI (consumer price index) or cost of doing business increase, but this year, there will be a two percent increase,” he said.

The superintendent also indicated next year the district would have to re-bid custodial services.

After retiring into executive session, the board of trustees emerged from behind closed doors to accept a donation from Prosperity Bank for a new scoreboard at Monte Jack Driskell Stadium.

The board also extended contracts to the following new personnel: Susan Aguilar; Jackie Beaulieu; Susan Felt; Lorna Gibson; Melodie Kroll (all at the elementary); and Tanya Rose at the junior high.