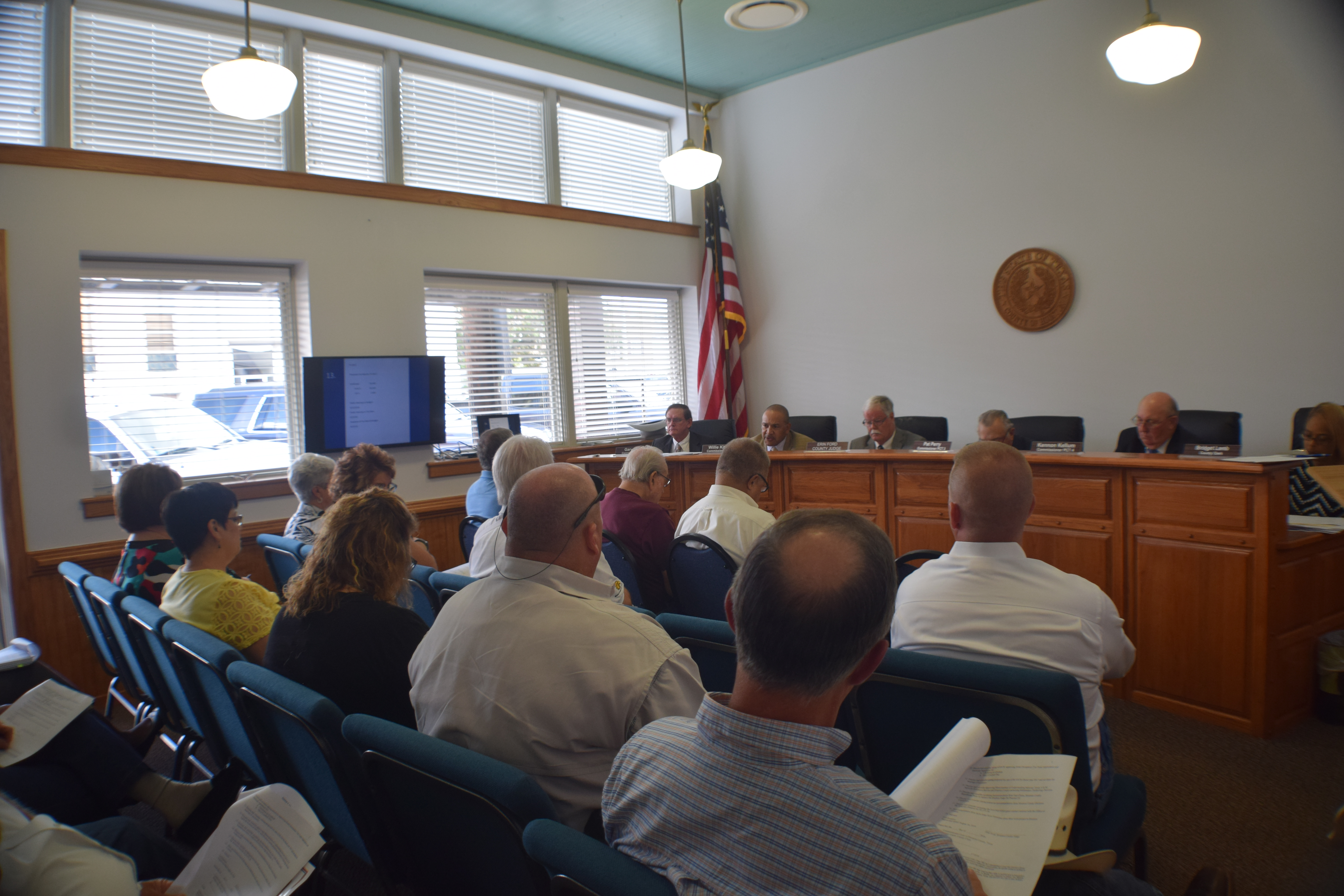 HOUSTON COUNTY – The stress and strain of the Fiscal Year (FY2017) budget process in Houston County was evidenced during a meeting of the Commissioners Court of Houston County which was convened on Tuesday, Sept. 13.

After a motion was approved setting the court reporter’s salary at $51,500 plus longevity pay, Judge Clark asked if she could address the matter.  She received the court’s approval and said, “I appreciate it (passing the motion) and I have cut that significantly from what I originally proposed. I do want to alert you if for some reason I’m not able to keep a court reporter at that pay, I will probably be coming to you for a large budget increase in the middle of the year. I have got to have a court reporter in order to do my job. I know that it (the initial proposed salary) looked like a lot, but she had over $7,000 in personal expenses. She has to provide her own equipment. It would be like your guys having to provide their own (road) graders. They don’t have to do that, but she does and that’s part of her job. She has also covered a lot of work for other courts, especially the district courts this year so we didn’t have the additional expense of having a visiting court reporter in the range of $150 to $300 per day. I have to have a court reporter to do my job and that is one of the reasons that – by statute – the court sets the court reporter’s salary. She is paid considerably less than the district court reporters and other court reporters in the area.”

When the commissioners began to discuss the salary for the court reporter from the 349th District Court, Judge Pam Foster Fletcher – also present in the courtroom – apologized to the commissioners and said she had not had time to file the court order setting the Third District Court court reporter’s salary, as of yet, but stressed she could do so now, if needed. After a brief discussion, the salary – split on a percentage basis between Houston and Anderson Counties – was approved in the amount of $22,790.64 which covered Houston County’s part of the percentage agreement.

A third application in the amount of $12,800 from Joby Hardwick for a billboard campaign attempting to direct tourists to stay overnight in his hotels died for lack of a second.

Commissioner Willie Kitchen explained the court’s failure to act and said, “If we approve this, we are going to have to talk to Floyd Salmon. We turned him down for the same thing.”

Following the approval of several other agenda measures, a public hearing on the proposed FY 2017 budget was convened and long simmering tensions began to surface.

Judge Ford opened the hearing and said, “When we began working this (budget proposal), our (property) valuations were down $200 million – which equated to – along with the loss of inmates (from Trinity County), about an $800,000 shortfall. We worked on the budget for some time to try and meet the effective tax rate. To the credit of the commissioners, we were able to reduce that (the effective tax rate) by two cents. Those two cents would have gone to support the precincts and other departments. The difficult task that they had in coming up with this is to their credit. We have adjusted and come up with a budget that we feel we can live with, considering the tight economic conditions we’re under.”

Once the floor was opened for comments, Judge Clark said, “I appreciate what the court and the commissioners have done this year, but I think I would be remiss in not having some regret that there’s not a cost of living raise (adjustment – COLA) for our employees. Our employees are essential for us to be able to do our job. I know times are tough for people who are paying taxes, but I was still a little disappointed there’s a little bit of a tax increase, but there’s no COLA – at any percentage.”

When Judge Clark concluded, Commissioner Kitchen spoke to Judge Ford and said, “This is for the public, not the department heads. Their comments should have been made in the (budget) workshops.”

Judge Clark clarified she was speaking as a member of the public and not in her official capacity.

As Judge Ford attempted to close the hearing and adopt the FY 2017 budget, Judge Fletcher asked the court, “Are you saying in a public hearing, because I’m not a tax payer in this county, I couldn’t speak?”

Commissioner Kitchen replied, “Judge, you are an elected official. When we had our budget workshops, you were asked to give your input along with the other department heads. When it says public hearings that means people that are not part of the Houston County (officials)…”

No further comments were made at that time. With no further discussion, a motion was made and seconded to adopt the FY 2017 Houston County budget. The motion was approved unanimously.

The next item on the agenda pertained to the setting of salaries for all officers and employees of Houston County. Judge Ford asked if anyone in the gallery had any questions on the matter and Judge Fletcher said she did.

“Is there more than one employee who changed positions?” she asked.

The county judge said, “On this motion, we are considering setting salaries for all officers and employees of …”

“Doesn’t that relate to this?” Fletcher asked.

After a brief back and forth between the two judges, Ford asked if there was an issue with the motion.

Fletcher replied, “I’m not sure that … well yeah, there’s an issue. When I tried to go to the budget workshop, I spoke up and said I had a jury trial that week and you scheduled it at the same time. So, I couldn’t come and talk. There’s that and when I tried to talk about my budget, everyone on this court specifically said I had to go to HR to get a change in the pay grade. I believe the court made a change in the pay grade without doing what I had to do so I think …”

County Tax Assessor-Collector Danette Millican was also in present for the meeting and asked Judge Fletcher, “Are you talking about (Judge’s Assistant) Jan (Pigford)?”

“Did that not go through the court?” Fletcher asked.

Millican replied, “No, that went through HR, but her salary did not change, only the pay grade.”

Fletcher added, “I just think the district court is being discriminated against because every office that wanted something, that had elected officials in the county, got something they asked for. (Third District) Judge (Mark) Calhoon and I do not live in the county and we have been asking for quite a few years …. to no interest at all. One year, I asked and the next year I showed you where there was a discrimination and discrepancy. So now, I don’t know what else to do.”

“District court is just flat out being discriminated against by this governing body,” she continued. “I get eye rolls, I get no interest and it’s like you don’t even respect what the district court does for this county or the judicial system. It’s just very disappointing to me that you know what’s good for your budget, know what you need and you can give yourselves those things. When someone else comes here that you don’t have association with, you dismiss them with, ‘If you don’t like it, go work somewhere else.’ I think that is truly unfortunate that is the approach you are taking with someone, say – who doesn’t live in this county.”

Ford said he and the other members of the court had great respect for the work both she and Judge Calhoon did in district court.

“Then at what point will what I have requested to do my job appropriately be listened to seriously? I think Judge Clark knows what I’m talking about.” Fletcher said.

Clark said, “The issue, I think is the court coordinators and the payment of the court coordinators and the fact that the county does set those salaries. I guess I differ from that a little bit in that I have been asking for that pay grade change as well for years and years. I guess I haven’t done it as much lately because maybe I’m resigned to the situation and the support that you do give us. It is hard to be the third branch of government, when we have to be an independent branch of the government. That is in every county in the state.”

Fletcher said, “My position is different. You only have one court. We have a coordinator for two fully working courts. My office also handles the indigent defense for this county. There is no compensation for two judges and no compensation for the other. We are just being discriminated against and I just hope at some point, you will respect and truly evaluate what I’m saying instead of doing what you are going to do again this year.”

A brief exchange occurred between the district judge and the county attorney where Session said she believed additional funds were put in the budget to hire a part-time coordinator but it was her understanding the funds were turned down by the district court. Fletcher said she completely disagreed with Session on the matter and the issue was brought to a close.

Once the court coordinator discussion concluded, the court approved the salaries for all officers and employees of Houston County as well the proposed tax rate of 52.4 cents per $100 of property valuation.

Early Voting Totals Up this Election Cycle
Woodstock at 50
FFA: Laying the Foundation for Success