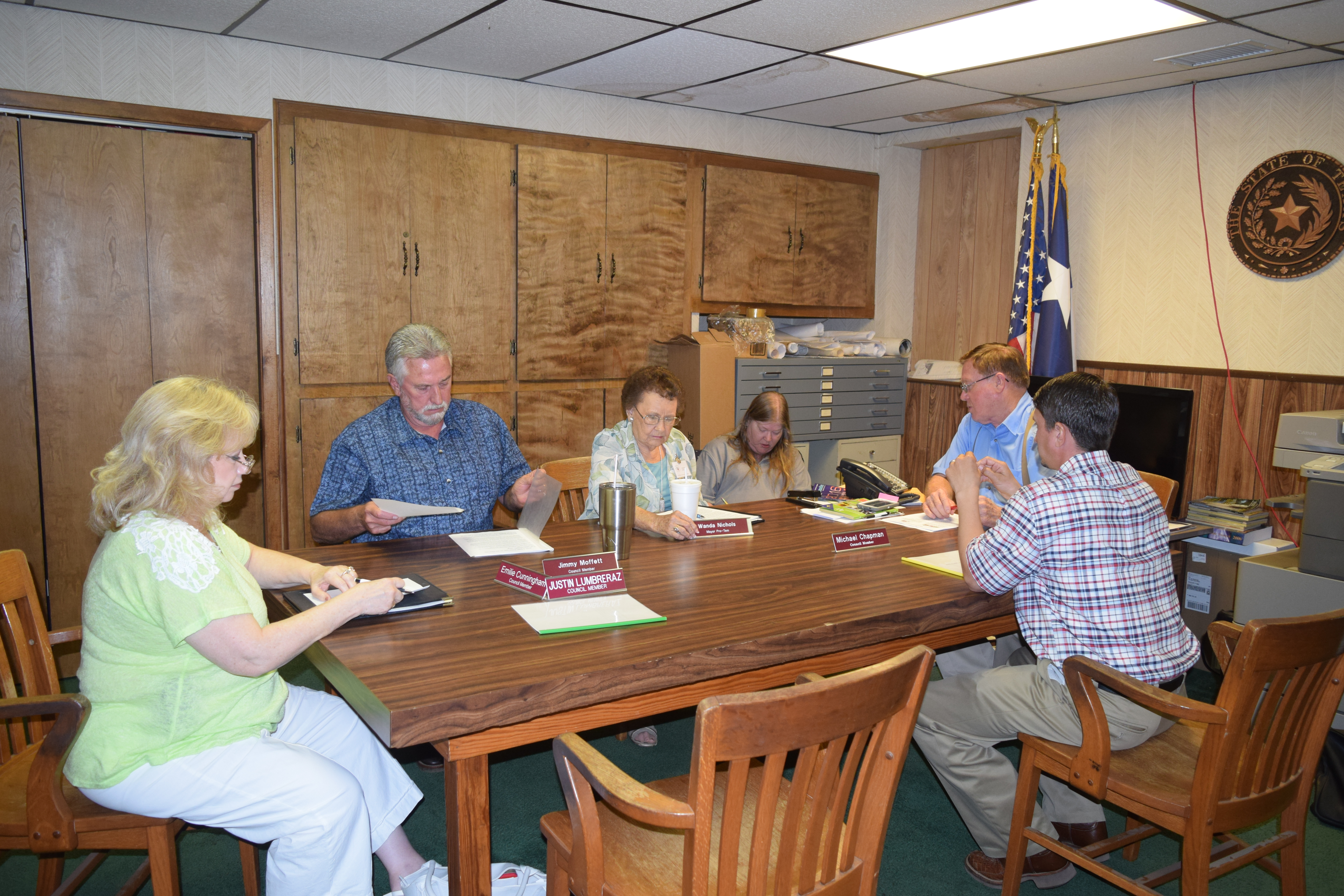 GRAPELAND – After presenting a key to the City of Grapeland to Floyd and Fannie Salmon in recognition of the 40th Anniversary of the Annual Labor Day Weekend Bluegrass Festival, the Grapeland City Council returned from Salmon Lake Park to the Grapeland City Offices to conduct a called meeting with the hopes of selecting a new police chief.

The meeting was convened at 7:30 p.m. with four of the five members of the council present. Councilman Justin Lumbreraz was not in attendance, but was in constant contact with Mayor Balis and his council colleagues via a conference call.

Before the police chief deliberations began, Mayor Dailey informed those in attendance, “We have the RFPs (Requests for Proposal) out for both the administrator and the engineering firm out and those are due in on Sept. 8. Those are to prepare us for the $275,000 grant we are trying to get for the streets and water. I have been in contact with several engineering firms and we have received inquiries from as far away as San Diego, Calif. I have talked to them and covered what some of the issues are.”

The mayor added there would be a committee meeting on Sept. 9 to hopefully pair down the selections and bring the committee recommendations before the full council on Sept. 13.

“The reason for this time schedule is if you approve the ratings and the ones recommended by the committee, we can then contact them and get started on developing the application for the grant. In order for us to score well, it will pretty much be on water and streets,” he said.

Speaking directly to Councilman Lumbreraz, Dailey said, “Justin we missed you tonight. We had a great thing to open up the 40th Annual Bluegrass Festival. I wish you could have seen it, but we gave Mr. and Mrs. Salmon a great looking plaque with a gold key to the city. You also missed the peach gobbler and ice cream (provided by the Grapeland Chamber of Commerce) and it was good!”

“Since we don’t have anything else,” Dailey continued, “those people who have applied for the position of our police chief, we have those applications here and completed. We have gone through them, go into executive session and consider those and see where we go from there. At this time, it is 7:36 and we will adjourn the regular meeting for whatever time it takes and go into executive session.”

After approximately two hours and 40 minutes behind closed doors, the council re-convened the open part of the meeting at 10:15 p.m. Dailey asked for a motion from the council and Council Member Emily Cunningham said, “I would like to make a motion to authorize the mayor to call the selected person and give them a start date and the hiring process.”

The motion was seconded by Mayor Pro Tem Wanda Nichols and passed by a margin of four in favor and one abstention. Councilman Michael Chapman cast the abstention vote.  With no further business, the meeting was adjourned at 10:20 p.m.

Following the meeting, Dailey was asked specifically which candidate was selected. Dailey said he was not at liberty to say until he had been in touch with the candidate and they had either accepted or declined the offer.

The three candidates who were interviewed Thursday night were: Richard Garner; Don Meyers; and Larenzo Simpson.

The mayor did report, however, a final candidate had been selected. “We think he is the one who has the best qualifications of anyone, has the most experience and brings the most to the table,” he said.

Dailey further indicated he hoped to have an answer by early Friday morning, Sept 2. The mayor was contacted on Friday and he said the candidate had been contacted and an offer had been extended. He added the candidate expressed a definite interest in the position, but had requested time to consider the offer.