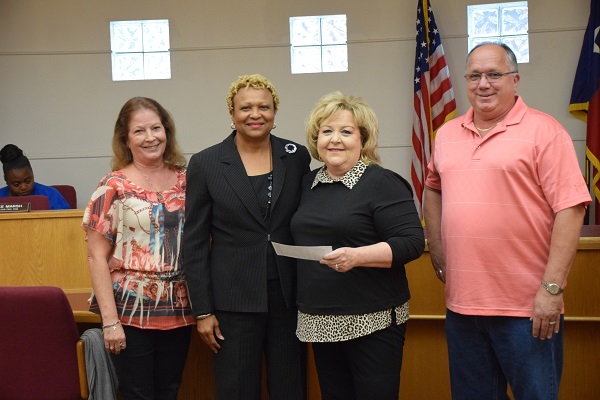 CROCKETT – The Crockett City Council met in a regularly scheduled meeting on Monday, Sept. 16 highlighted by the approval of several resolutions and the receipt of a generous donation.

As the council session got underway, the first item of business concerned the acceptance of a $2,500 donation from the Crockett Downtown Beautification Committee (CDBC) for the purpose of installing an awning at the Farmers’ Market.

Former Crockett Mayor and CDBC member Joni Clonts, along with other members of the CDBC were on hand for the presentation.

“On behalf of the Downtown Beautification Committee, we would like to present this check which we received from the JB Sallas Foundation. They gave it to us because they knew we were raising money for the pavilion and now we would like to give this to the city to be used towards the pavilion in the farmers’ market area,” Clonts said.

Mayor Ianthia Fisher added, “They have done a lot of work on our new community place and it will be built into an even greater place.”

The next item concerned the construction of an awning on the Crockett Civic Center property by the Houston County Screaming Eagles.

City Administrator John Angerstein said the Screaming Eagles were a remote-controlled airplane club who used the property and had helped maintain it. The club requested the city to allow them to place a portable awning on the property so they could have some shade during the day. A motion was approved to allow the club to install the awning.

As the meeting continued, the council approved two resolutions and agreements with the Texas Department of Transportation concerning the temporary closure of roadways. The first resolution dealt with street closures for Christmas in Crockett while the second pertained to street closures for the 2020 Davy Crockett Classic Bike Race.

Two other resolutions were approved by the council during the Monday night meeting. The first of these resolutions authorized the submission of a Texas Community Development Block Grant program application to the Texas Department of Agriculture for the downtown revitalization program fund.

The second resolution called for the city council to declare an area of the city near city hall a blighted area because it contains conditions detrimental to the public safety and welfare of the community.